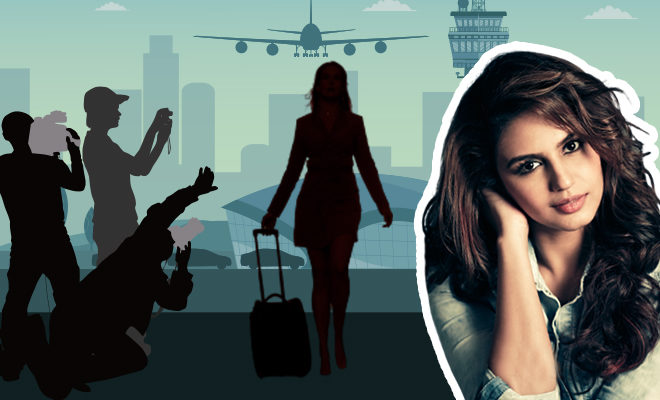 When we think about celebrities and the kind of life they lead, we seem to forget that at the end of the day, they too are merely human. Just because it’s their job to smile for the cameras, doesn’t mean they don’t sometimes hate it. They too have their insecurities and setbacks. I know we put them on a pedestal and romanticize their lives. But the fact of the matter is that they are just like us in a lot of ways. But much, much richer. A lot of celebrities like Deepika Padukone and Ira Khan are very outspoken about prioritizing mental health. Joining those ranks is Huma Qureshi. In a recent interview, she said that looking at pictures of herself every day was not good for her mental health. We can imagine how that might be difficult.

A versatile and talented actress, Huma said in the interview that she came to Mumbai so that she can be recognized for her work and not be photographed at the airport. Adding that the media can sometimes be harsh but they aren’t as harsh as she is on herself. Huma said that it was difficult to see pictures of herself being published every day. It took a toll on her mental health.

Huma Qureshi said in the interview, “Sometimes, as women, we are very harsh on ourselves. The media can be harsh, but I feel more than the media, we can be very harsh on ourselves. For me, a very important realisation (last year) was to just be kinder to yourself and not indulge in negative self talk. For me, seeing myself every day is not good. I want to be known for my work, quietly be at home, spend time with my dog, chill, read a book, go to the beach for a walk. I came here to be an actor, not to get photographed outside the airport.”

Also Read: Exclusive! Sarah Jane Dias On Playing A Potential First Lady In ‘Tandav’, And Her Mental Health Mantra For 2021

She further added, “I realised that seeing my picture every day in the paper, outside the airport, gym or outside here or there… It is not good for my own mental health. Somebody will take a bad picture in a bad angle and then move on, but I will just keep looking at myself.”

Don’t we all do this? I know I do. If I see a picture of myself taken from a bad angle or where my arms are looking chubbier than usual, I will keep focussing on that. In that way, what Huma is saying is so relatable. But of course, it’s so much worse for celebrities considering we live in a world where they are trolled at the drop of a hat.

Moving on, Huma said that she used the year 2020 to reboot and work on her mental health. She said, “It was a reboot in many ways — mentally, physically, in every which way… Now, I almost feel like I am starting afresh, and don’t want to make the mistakes that I made before. I feel we can approach 2021 with more gratitude, hard work, and just being kinder and nicer to each other.” The actress said that when she goes out, she doesn’t want to think about how she looks. Instead, she wants to remember the, “feeling and the mind space with which I went, maybe to the airport or my home” and “not that somebody else has taken a picture and said something nasty.” She has blocked all that negativity out from her mind space.

We love that Huma Qureshi is so candid and real!