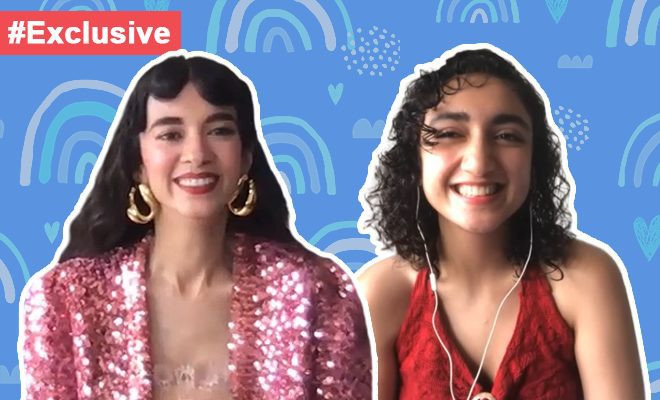 Love is love, and love is definitely in the air. Why, you ask, kyunki Pride Month toh khatam ho gaya na? Well amigos, first, it ought to be Pride month 365 days of the year. And second, the reason love is in the air is because Netflix is dropping its romance anthology Feels Like Ishq this Friday. And one of its six adorable stories is She Loves Me, She Loves Me Not, directed by Danish Aslam, written by Sulagna Chatterjee, and starring Saba Azad and Sanjeeta Bhattacharya. There’s a beautiful paradox here in that what sets this story apart from the others in the anthology is also what makes it the same as the others. It’s a queer love story, unlike the others. But love is love, and in that, the episode strives to normalise queer love and show you just how it can be like every other hetero ishq you might’ve seen!

Having watched the Feels Like Ishq trailer, I was eager to see She Loves Me, She Loves Me Not unfold, particularly when I saw one of the lead characters, Muskaan (played by Sanjeeta Bhattacharya) break the fourth wall. What’s more, her character is an artist working at an ad agency, where she meets Tarasha (Saba Azad) who makes her feel all of those warm mushy feels. And this premise of a workplace romance gave filmmaker Danish Aslam and his team a lot of fun ground to explore in terms of how it all looks on screen.

In an extremely fun conversation (that you’d wish you could’ve joined in!) with director Danish Aslam, and actors Sanjeeta and Saba, I tried to unpack as much as I could about this cute story that is a part of Feels Like Ishq! Read on, folks! 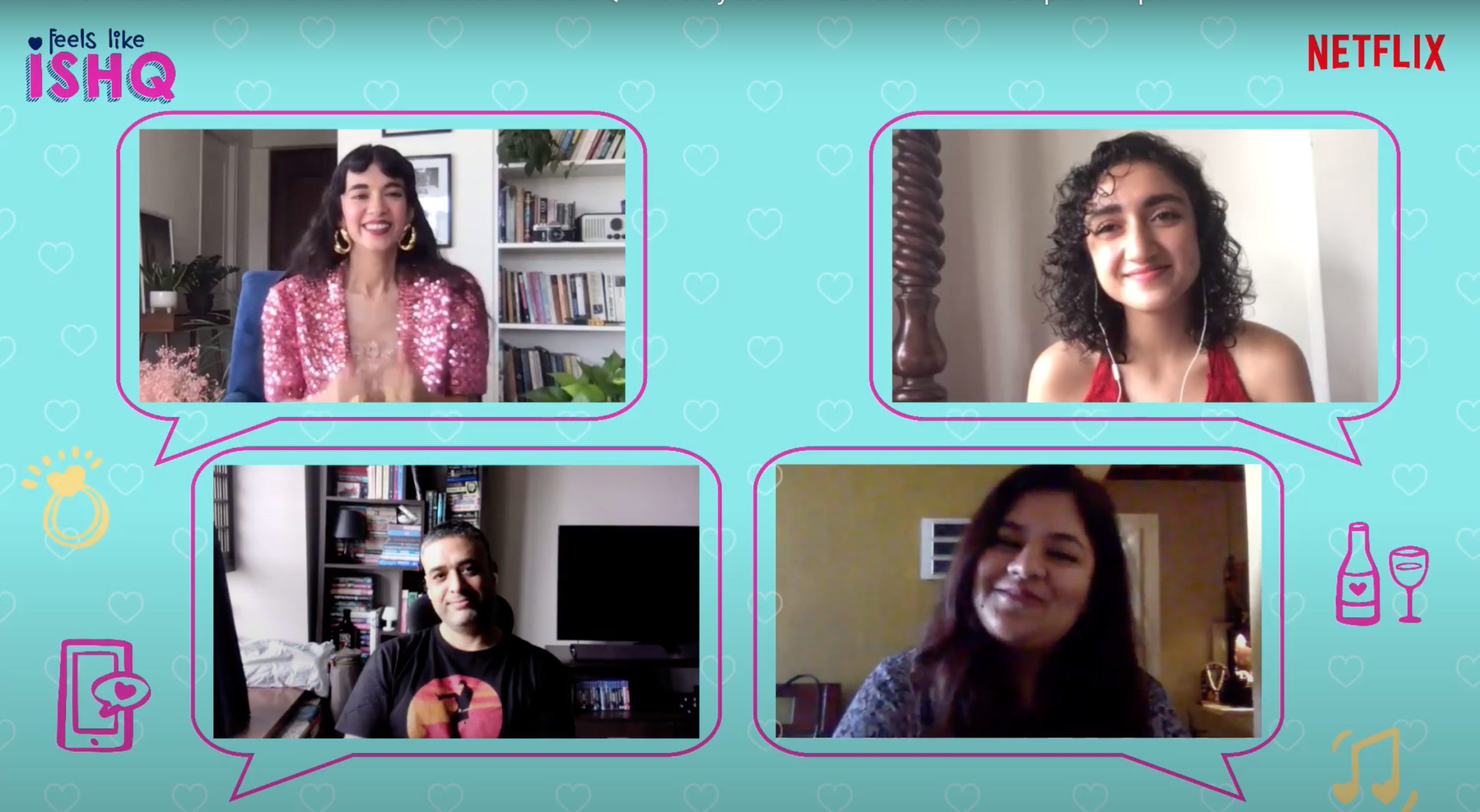 Q: Did you always want to tell a queer story?

Danish Aslam: The concept of She Loves Me, She Loves Me Not came from Sulagna Chatterjee, our writer, and it was quite fleshed. But yes, I will say that it was interesting to me because of the fact that it was a queer love story. Mainly because what I’ve wanted to do for the longest time is to tell a queer love story that doesn’t hinge on the queerness of it all. I feel that a lot of fiction on this subject in India—the fact that it is being made is a good thing—tends to be a little heavy and basically about the process of being queer and coming out. Whereas this is just a love story between two people who both just happen to be girls, but that is not the focal point of the story. I feel that that’s what’s missing and that’s what was attractive about it.

Q: Feels Like Ishq being an anthology, you have a short time to tell your story. How do you approach playing your characters that don’t really have a backstory but have so much to say?

Saba Azad: As Danish said, usually these characters are either too heavy or they’re caricaturised. But here their queerness isn’t the focus, it’s their love story that is. So, they are queer. Why make a big deal out of it, you know? Love is love.

What I like about Tarasha is that she is a lot like me. Something similar about her overconfidence, in a sense that she is kind of cocky, but also extremely awkward! It’s like a weird mix of both things and I just started tapping into that side of me for this.

Sanjeeta Bhattacharya: Yeah, I was going to say the same thing! Muskaan’s character is pretty much much like me, she has her own world in her head, and it is crazy. But outside, she is sometimes quiet and introverted. In fact, Muskaan is an ambivert, and depending on who she is with, she opens up or doesn’t. In front of Tarasha, she is trying to stay away, but at the same time, she is falling for her.

And that’s who I am! You know, when I was a baby, I did not even cry. My mom had to poke me to make me cry to make sure that I was okay, that’s how quiet I used to get! Even now, unless you strike up a conversation with me, I am not usually the one to do it first. And in Muskaan’s case, Tarasha does exactly that. And there we go, it begins!

Danish: It’s true! Today’s the first time I’ve heard Sanjeeta’s voice. I have no idea what she sounds like! *laughs* 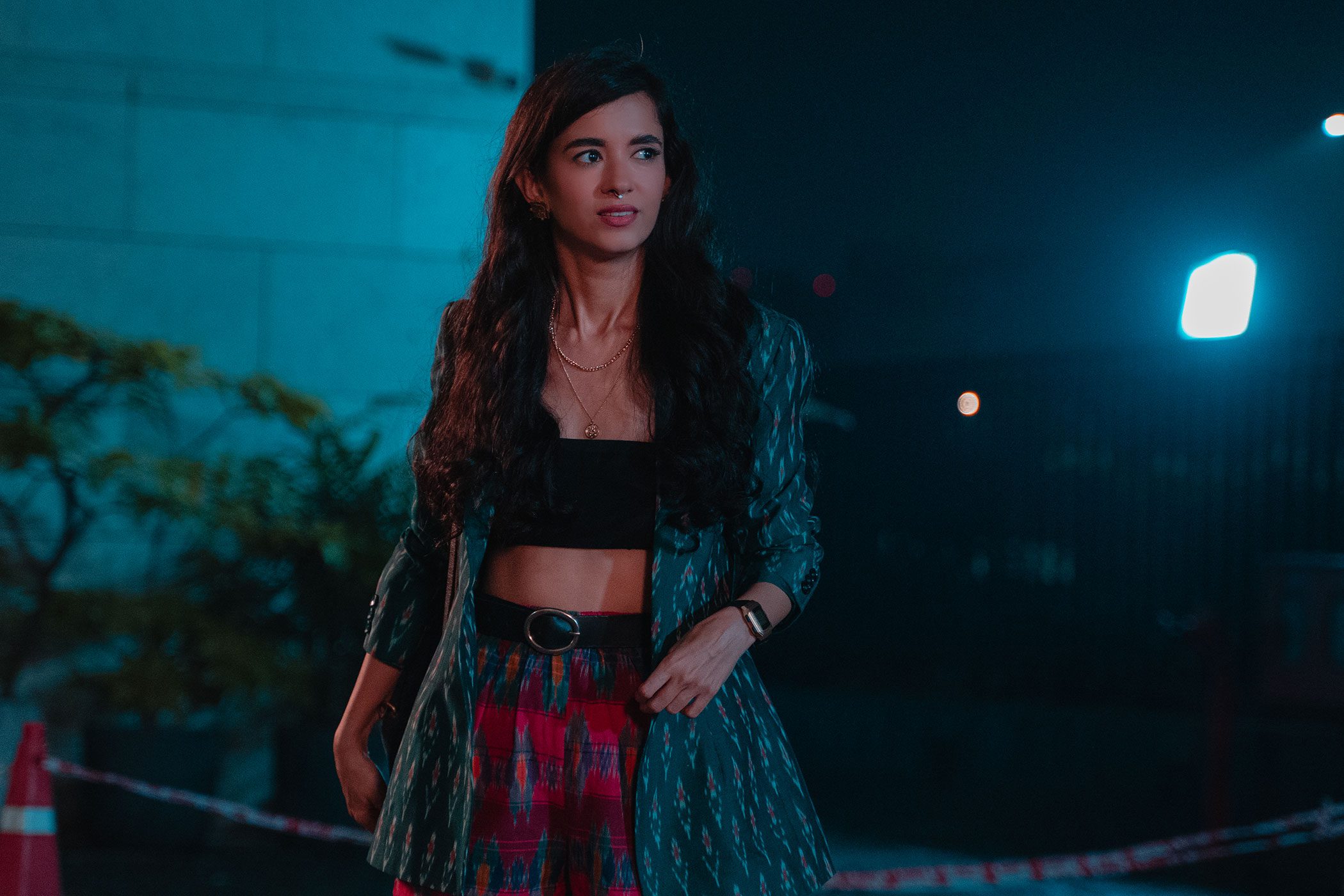 Q: Let’s talk about how your characters don some pretty interesting outfits in the film…!

Danish: Before they answer, I want to tell you, there’s a rainbow outfit in there that’s Sanjeeta’s personal, we didn’t have to create that!

Sanjeeta: That’s true, it was all me! *laughs* No, I’m kidding, everything that was decided for me, it was the stylist, and I’m very thankful for that. They were just presented to me and I thought, “Wow, this looks great, I want to buy it!” None of it was mine. But for Tarasha though….

Saba: Yes, some of it, the clothes and shoes were mine. But I think, again, the stylist did a fantastic job and Danish collaborated, of course. But what I liked is that they took my opinion into account. I think when you’re comfortable in what you’re wearing, you can stop thinking about that and start performing. I was very comfortable in the clothes I was wearing and they were fantastic.

Sanjeeta: Yeah! And I think my favourite outfit was definitely the rainbow one that Danish mentioned, especially the bow on the top!

Also Read: 15 Men Who Are Our Current On-Screen Crushes And Make Us Feel Like.. *Heart Eyes*!

Q: Was breaking the fourth wall (which reminded me a Fleabag!) always the plan? And how did you decide on how the film would look visually?

Danish: I’m so happy you asked me this question because I have a one-hour answer ready!

You know, I love Fleabag, but I just want to say that we’ve been breaking the fourth wall for decades before Fleabag. And it is kind of sad that every time you do it now, we’ve to justify it by saying it’s not Fleabag. But yes, I know what you mean, I remember thinking of it too.

The fourth wall breaking, again, was an idea that was there from the beginning in the script, and I just amped it up a little bit. As far as the look of the film goes, I’m glad you asked because Anshuman, the DOP [Director of Photography] and I, we actually spent a fair amount of time figuring out the look of the film. There are a lot of things that we’ve kept which are subtle and we hope some people get it. For example, I didn’t know, until I started researching the script that there is a such a thing as a bisexual pride flag. That’s a colour tone that we’ve followed in terms of the palette for a lot of our frames. I draw deliberate attention to it only once, but otherwise it’s subtle and not very in your face. 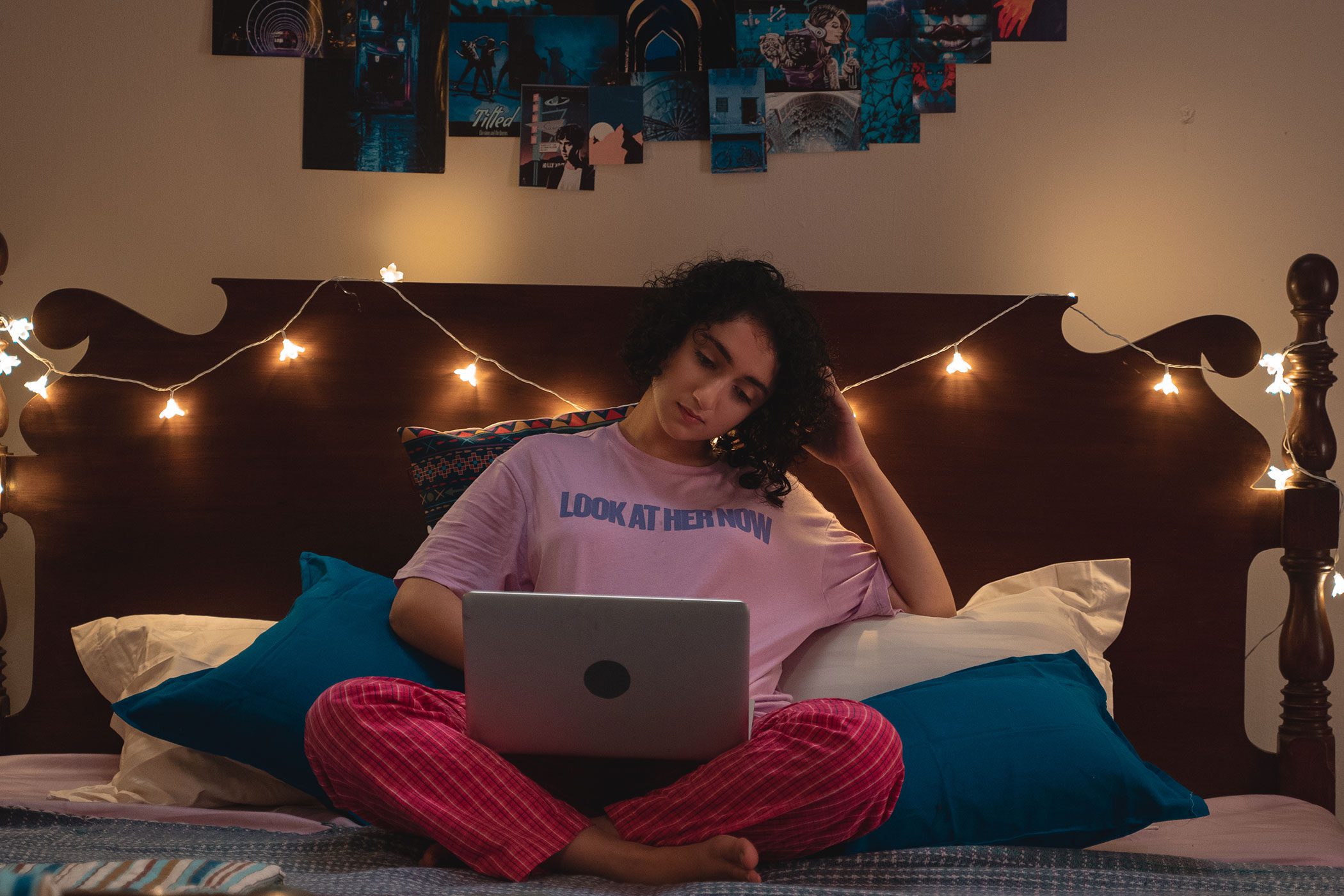 Even for Tarasha’s clothes, if you notice, the styles are completely different and opposite between Muskaan and her. But my brief to the stylist was that Tarasha is from the corporate world, and a harder character. So there’s a lot more dressing up when it comes to her in terms of for styling. Muskaan is an artist who likes doing Manga and Anime in her spare time which was also a big influence on me. In the look of the film, right from the first frame of what she’s drawing, we actually contacted a friend of mine for Delhi who is a Manga artist and got him to sketch those for us for the show.

So that was an influence as well in the music and the look of the film. So yes, there’s a lot of stuff that we’ve done with the colours which is subtle, and I’m hoping a lot of people get it. If they don’t, that’s okay too, because it just looks so good. So I’m not complaining!

Q: What are you most excited for the audience that watch Feels Like Ishq to see in She Loves Me, She Loves Me Not?

Danish: The two, brilliant actors that we had the good fortune of working with! And they were just so good, that I am going to let them answer the rest of the question!

Saba: I think the first takeaway has to be that at the end of the day, love is love. There is a need for queer stories to be told and to be told like any other stories and not made a big deal out of, because it’s love! It’s just as simple as that, right? So I want to see more queer stories normalizing queer love. Even stuff like kissing that we haven’t seen as much in queer stories as in regular stories. 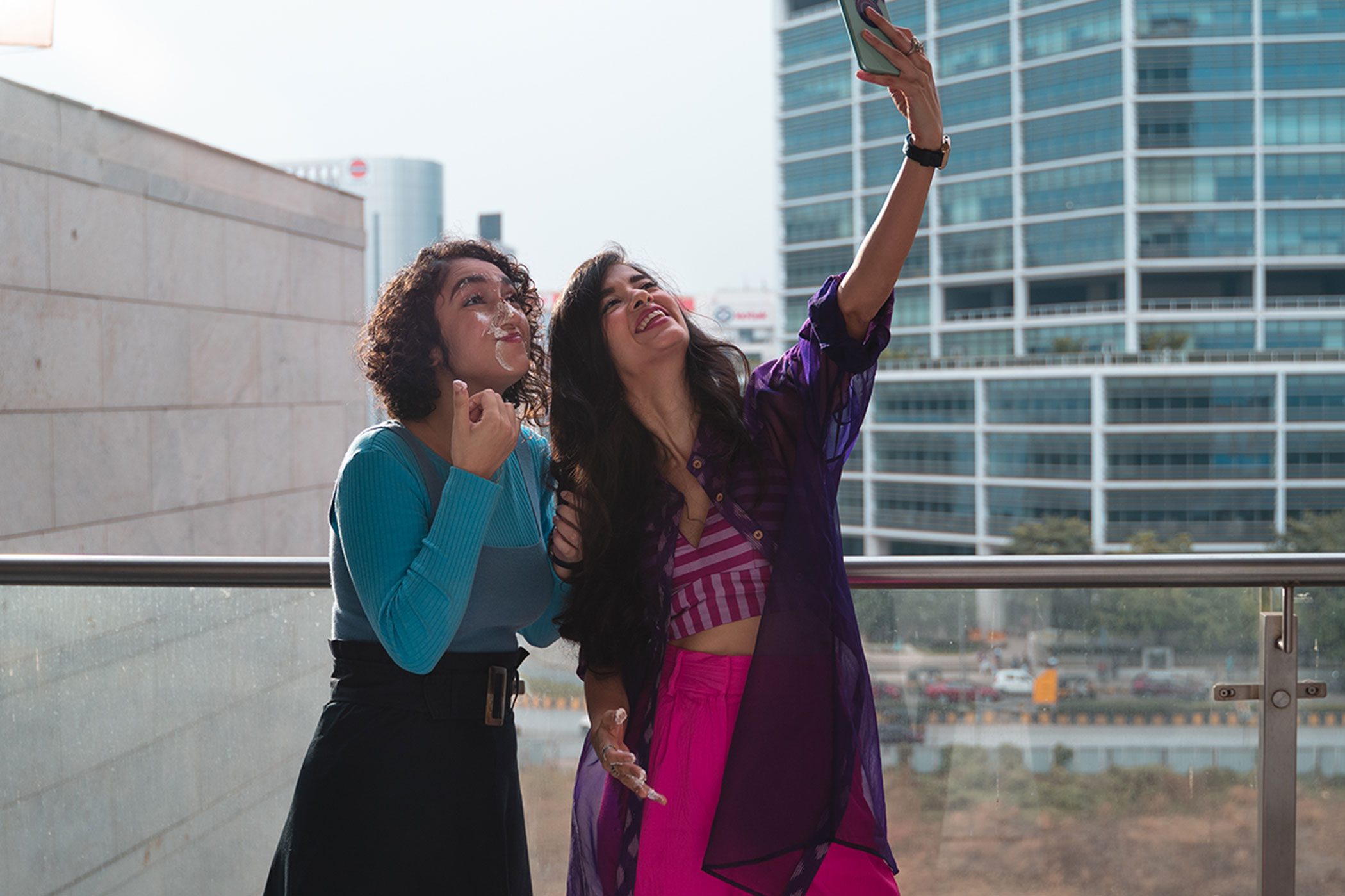 Danish: Even if it’s not the physical aspect of it, I feel that just the concept of it. The idea of queer relationship being a possibility and it existing and the default not being heteronormative.

We are privileged because we live in a time where we can actually do this, unlike 10 years ago, when this would not have been possible, because it was illegal. I don’t necessarily blame the filmmakers who’ve made queer love stories till now, because they’ve had to deal with the reality of the situation, which is changing for us now. So we are looking at it from a point of view of privilege because of the legality of it.

But having said that, I do feel that there has been a serious one-sidedness to the story so far. And I think it’s nice to celebrate it for a change. If people take anything away from the story, then it should be to celebrate diversity, queerness, identity, however you want to, whatever label you want to put on it.

Sanjeeta: Yeah, like we show it in office spaces, you know. I feel like a lot of people kind of either shun you or look at you differently if you happen to be from a certain sexual orientation and I feel like it’s just not represented on screen.