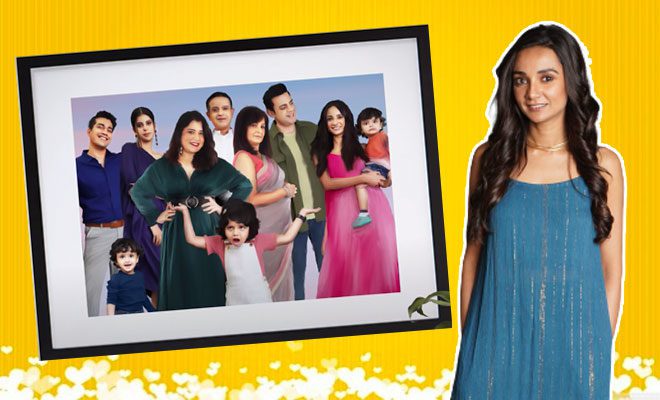 I could count on my fingers the number of good movies and shows releasing these days that you could watch with the family. The emphasis being on ‘good’, because while Indian families have evolved, traditional Indian television shows haven’t exactly matched up. Which is why the trailer for Potluck, a new web series on SonyLIV, had me quite excited. It looked like a fun family comedy drama, with modern family dynamics in play, and a cast that could pull it off for sure. Potluck stars Jatin Sial, Kitu Gidwani, Shikha Talsania, Cyrus Sahukar, Ira Dubey, Harman Singha, Saloni Khanna and Siddhant Karnick. It is brought to us by producers Kunal Das Gupta, Pavneet Gakhal and Gaurav Lulla, written by Ashwin Lakshmi Narayan, Bharat Misra and Gaurav Lulla, and directed by Rajshree Ojha, who has previously directed the Sonam Kapoor starrer Aisha.

Potluck revolves around members of the Shashtri family and how their patriarch’s health condition brings the family together. And to keep them together, an idea of a weekly potluck at one of their homes is suggested. In the course of eight episodes, we see how the Shastri family goes through the many ups and downs of life with their family always backing them up, and an otherwise silly idea of potluck actually becoming an indispensable part of their lives.

The show looks incredibly fun and quirky, and a major credit goes to the cast playing their parts so well. In fact, if you ask Ira Dubey, who plays Akanksha Shastri, one of the daughters-in-law, she’d tell you it’s one of the show’s biggest strengths! My conversation with Ira was a fun one, as we chatted about Potluck, her reuniting with her Aisha team—Rajshree Ojha and Cyrus Sahukar, playing a young mother, and what would her go-to dish would be to bring to a potluck! 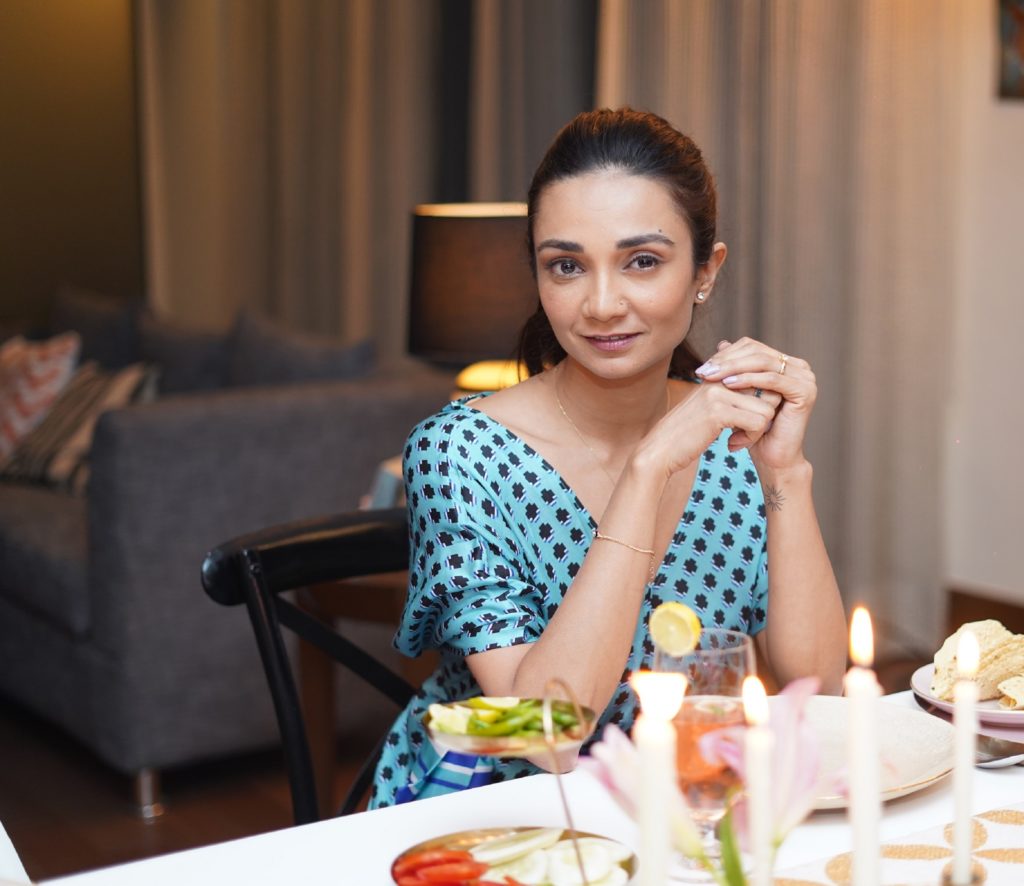 Q: How did Potluck happen for you?

A: I was approached by Pavneet Gakhal, one of our producers, and at the same time, Rajshree Ojha approached me as well. I just had a chat with them and the first thing I remember them telling me was, “We’re looking at you to play a mother of three kids. And I was like, ‘Huh!’” Because I have a theatre background, that didn’t throw me off, but rather intrigued me. If they were looking at someone like me to play a young mother, then what was this show about? That’s when they shared the script with me for the first couple of episodes, and I was almost sold.

I don’t think I’ve come across a family comedy drama like this one on screen, which is urban, contemporary, very real, funny and quirky. And it’s not too sweet or melodramatic or sentimental. It’s actually tongue-in-cheek as well, which I like because that’s what today’s youth is and today’s families are. So I loved the writing and the space, and then I remember going for the reading with the entire cast. And I think all of us were sold on that first meeting because there was this way palpable energy between all of us.

Q: What was it like working with this talented bunch?

A: Working with this cast was a major hook for me. I think Potluck is really well cast and that is one of its biggest strengths. It’s also a very refreshing space, say like a ‘Modern Family meets Schitt’s Creek’, you know? Both our producers are very talented and have a very good track record in the kind of stuff that they’ve done. Working with Rajshree after almost ten years after Aisha was also quite exciting. it was sort of nostalgic for me.

I think what really helped the show is that we shot in a bio-bubble for three weeks straight, roughly 21 days in February in Delhi on one location. So, we were living there and we were shooting there. And the kind of camaraderie that you would see in the show is, honestly, a reflection of the off-screen camaraderie as well. Because when you’re living and working in the same space, it’s very difficult not to become extremely bonded, and that reflects in the performances too.

Q: Can you tell us more about your character, Akanksha, and the experience of playing a mom to three little ones?

A: It wasn’t a big deal to me that I was playing a mother to three kids on the show. But once I got on set and met the three kids, I think I would’ve taken them home with me! One of those kids is a 5-year-old girl, a wonderful actress, called Aradhya, and the twins were absolutely adorable.

I guess playing this character was a good thing because, I’ve always been one to break the stereotype. In our business, it is easy to get typecast as either the best friend or the ‘glam doll’ or the ‘vamp’. Theatre allows you to not get stuck, and now luckily with OTT, things are changing a lot. I was very keen to take on the challenge of playing a young mother who works, manages her house and shares responsibilities with her husband. There is a sort of a sharing of gender roles, which is all very fluid. So Akanksha, my character, is a very empowered woman.

She’s got it together, even though there are still everyday struggles, whether it’s managing the kids’ time with work, trying to maintain relationships with her husband and the in-laws or deciding whether you want to rent or buy a home in an expensive city.

Q: You and Cyrus Sahukar are reuniting post Aisha. Is it still hard to keep a straight face around the guy? Any fun memories you’d like to share?

A: Let me tell you, it’s extremely hard! I’ve said this on record and I will say it again, Cyrus is one of the funniest men I know. It was a riot because Cyrus is constantly entertaining everybody, and his energy and quick-wittedness are always a delight. It feels like yesterday that there was an ease and a comfortable level of shooting with him and playing a couple in Aisha.

It was more fun this time because there were kids thrown in the mix! And 10 years later, there’s a certain maturity, life experience and wisdom that hopefully comes into people also. We shot the show in three weeks, and I remember, this fun anecdote. Cyrus and I were thrown off the deep end. We were shooting the potlucks at different locations for different family members’ houses. And perhaps because Rajshree has worked with both of us before, the first location was our house.

So, we were there, with our three kids, in a new location, and we had to shoot 18-hour days for like 5-6 days. It was hectic and really intense, and I think without Cy and his sense of humour, and us laughing our way through it, it would have been really hard. Whenever we couldn’t handle it, we just picked up one of those kids and walked around with them. And I would just dump one of them on Cyrus and walk away! It was really nice to be able to get into the skin of a real family.

Q: One thing I do have to talk to you about are your incredible fashion choices. Is it all you? Or do you take cues from the stylist?

A: Thank you for saying that! Oh yes, I am very involved. I enjoy fashion thoroughly, I really do. But at the same time, I don’t take it too seriously. I come from a lineage of very stylish people. Both my parents— my dad was and my mom is—very stylish. So, there’s a certain innate sense of style which God and genetics have blessed me with and I’m grateful for that. I have fun with it. I don’t follow trends either, but just go with my gut.

Q: The OTT space has opened up opportunities like never before for female artists, finally. What excites you the most about this changing tide?

A: I think having female-driven stories, and people writing stronger female characters. So, even in this case, where it’s a family comedy drama, whether it is a woman who is a mother of three kids trying to balance work with life and family, or whether it’s a police officer, a detective or a doctor or anyone else. I believe that we need to write and show women in their true element and true power.

For a long time, there’s been a traditional, very patriarchal way of looking at women, and I think that is really what the shift is all about. That makes it very exciting. I, for one, produced a short film and acted in it. And as an actor as well as a creator/ producer, I feel that’s the future. Women are going to get more and more space in terms of both storytelling and character.  It’s very promising and encouraging, and things have changed a lot. And yet there is still a long way to go they still stay still, you know, a way to go.

We also have to embrace the fact that we ourselves are the change makers. Whatever we pick and choose to do, we have responsibilities as well. It’s our choices that will make that revolution happen.

Q: This pandemic must’ve given you a chance to spend quality time with your loved ones. What were the activities that brought you all together to have fun?

A: Very often, food. Food is love! And food is nurturing! And as it turns out, very often babies! My sister had twins three years ago, and throughout pandemic, I got to spend so much time with them, which was really good practice for playing Akanksha.  I was constantly babysitting them and it was wonderful that the show fell into my lap after spending almost a year with them.

And of course, time. Just quality time spent together. I think everyone these days is so busy in their own life. Again, it’s something that’s very close to what Potluck is all about. Today’s youngsters, because of the influence of the West, want to be very independent. But the truth is, Indian culture is all about our connection to our family. The pandemic gave us a chance to rediscover that and ourselves.

Q: What’s the one dish that you would bring to a potluck?

A: I think it would be a Spaghetti Aglio e Olio. I am not a fantastic chef, and too impatient to cook often. So I would just toss in a good aglio e olio and bring it!

Q: What are your hopes for when Potluck is out for the audience to watch?

A: The family space in Potluck is wonderful, and there are some wonderfully etched characters that have been cast really well. So, I’m hoping that this is the first of many seasons. In fact, you know, I think this is the kind of show that if the people like the characters and relate to them, it could do really well.

Potluck is currently streaming on SonyLIV.

15 Men Who Are Our Current On-Screen Crushes And Make Us Feel Like.. *Heart Eyes*!