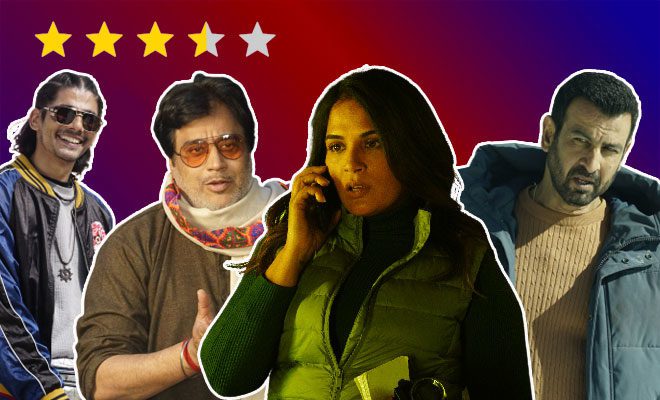 I’ve probably said this a bunch of times, but I love ghost stories based off folklore, mysteries in the woods of small, sleepy hill stations, the whole Ruskin Bond shebang, if you will. So if you set a thriller series that mixes all these elements in the mountainous foothills were the ample fog and dense woods make it look like anything can happen, anything can be real…. I am down to binge it. The trailer for the new Voot Select series Candy inspired these very emotions in me. And if I were summarising my viewing experience, I’d say it definitely exploited all the ingredients it had at hand to create a total treat for connoisseurs of this genre, which only got slightly sour in the end. Candy stars Ronit Roy, Richa Chadha, Manu Rishi Chadha, Gopal Datt Tiwari, Nakul Roshan Sahdev and Riddhi Kumar, amongst others.

Candy is created by Agrim Joshi and Debojit Das Purkayastha, who’ve also written the dialogues along with Abhinav Sharma. and directed by Ashish R Shukla. The director of photography is Faraz Alam, editing is by Bodhaditya Banerjee, and the music is by Neel Adhikari.

Set in a fictional town of Rudrakund in Uttarakhand, the series begins with a murder in the woods of a boy (Mihir Ahuja) from a prestigious local boarding school. His friend, a girl named Kalki (Riddhi Kumar) is missing. The suspect list is wide, because though the town looks heavenly from up above, underneath all that fog on the ground level, it’s rather dark and full of twisted secrets of its townsfolk. A local politician rules the town and its police, and is considered above the law. His son runs a drug racket, lacing the locally made candy in his own father’s factory with narcotics, which he then supplies to the school kids. Donning a creepy white rabbit head mask, he throws raves in the jungle to further his clientele.

While there are enough possibilities of why a human would murder a schoolboy, the discovery of the missing girl throws in another suspect. A local folk legend about a creature called Masaand (or Masaan?), who’s returned to haunt any kid who pops the drugged candy and wanders into the woods.

At the centre of all this are two characters—DSP Ratna Sankhawar, a single mother to a little girl, with her own past and secrets, who’s trying to do her job, without ruffling feathers of the high and mighty. Unfortunately, this case trashes all her chances of keeping things low profile because a school teacher (and mentor to both the murdered boy and his friend, Kalki), Jayant Parekh, begins nosing around the murder and begins conducting his own investigation to unravel the towns creepiest secret.

Also Read: Thoughts We Had About Richa Chadha’s ‘Candy’ Trailer: Interesting, But Why Does Rudrakund Feel So Much Like Riverdale?

Candy begins as your regular crime thriller around a drugs racket but soon devolves into themes of horror, surrealism and the dark v/s light dichotomy within each of us. With Richa’s DSP being a single mother and Manu Rishi’s vidhayak, it also brings in angles of bureaucratic power struggles, corruption, public justice, fake news, gender discrimination in the workplace and more. As the title suggests, there’s a major focus on ‘sin’ and ‘sinners’, with the folk legend being a monster who punishes those who sin in the woods, perhaps a nice allegory for the Garden where Eve partakes and commits the Original Sin, and has been made to feel guilty and punished for an eternity for it. It’s interesting how this idea of sin, the gender discrimination in the punishment for the sin, the interpretation of this sin as per the convenience of some people, and the seven sins that devolved from the original one has been integrated into the story.

Interesting, right? The show looks pretty great too, as it fully utilises its locations, both indoors and outdoors, to evoke a sense of the mysterious and clandestine, sometimes even creepy, and often mirroring the characters’ mental state. There’s a particular scene in the final episode, set in pristine white snow-covered expanse, that is breathtaking if it weren’t so intense. And since we’re talking visuals, I thought the opening and closing credits looked pretty cool too, proper trippy!

The series consist of eight episodes, most of which are rather well-paced as they steadily unravel one secret after another. I was hyped to watch Candy thanks to my interview with Richa Chadha, who told me that the audience could expect a really good twist in the end. That’s actually an understatement, because Candy has lots of twists when the end episodes arrive. I am not saying they’re all unexpected; some of the red herrings are a bit too obvious to take the bait. But the series keeps you gripped until the very end, waiting either to find out the answers or see at what point what information is uncovered. At one point, I thought there were too many loose ends, but the series manages to tie up each one of them satisfactorily.

Also Read: Exclusive: Richa Chadha On Playing A Cop In ‘Candy’, The Unexpected Twist Audience Can Expect, And More

When it comes to performances, Richa Chadha puts up a very authentic portrayal of a female cop who wants to mind her own business. I like, and its’s something Richa says in her interview that she liked too, that DSP Ratna is not a black or white character. At least, compared to Ronit Roy’s school teacher, who though being one of the leads, and powered by an actor of Roy’s caliber, felt very uni-dimensional. For staters, he plays a teacher but we barely get to see him teach a class; scratch that, we don’t see the kids of that school ever study! All his Jayant Parekh does is keep a tight hold on his new ward, Kalki (wha he hugs a lot, which again for a teacher, is not really appropriate), and investigate the case.

Even the character of his wife is a very weird one, because I couldn’t understand the patterns of her behaviour, which shifted from being petting a rock to shutting down a politician for saying something about her husband’s parenting style. What is up, lady? It’s not as simple as having more for these characters to do; Jayant does plenty. It’s just about giving them a slightly more loaded personality, perhaps by delving into his teaching life before the tragedy stuck, his relationship with his family and so on.

The show has a decent supporting cast, particularly the other cops and the actors playing the highschoolers. But it is Manu Rishi Chadha as Mani Ranaut, and Nakul Roshan Sahdev as his son Vayu Ranaut aka White Rabbit that stand out with their performances. Nakul, particularly, plays the restless, doped up, erratic, Vayu with flair, though one might think he overdoes the eye blinking bit. I enjoyed the complexity of his character, rather the darkness in all of the Ranaut family actually.

I do have a few complaints, and most of them pop up around the end of the series, threatening to sour the otherwise thrilling taste of this Candy. The series infuses a little creepy here and there in its episodes, but come the final two episodes, creepiness escalates quickly, and after a point, it gets downright uncomfortable because everything becomes a little too graphic for my taste. The series falls for one of the most basic tropes of the big bad narrating their entire ledger of bad deeds to the good ones. But considering the sensitive subject that is being talked about, it was downright uncomfortable and traumatising for me to watch those few minutes of the episodes. I hope they do come with a trigger warning.

The last few episodes is when you tend to feel a slight stretch as well, because as I mentioned before, there are lots of twists which need to be unravelled, and you want them to get to it faster.

When I saw the trailer for Candy, I couldn’t help but think of Riverdale, because some of the similarities, like the names of the towns, the candy laced with drug and given to school students, the folk-horror inspired creature in the woods that you don’t know if it’s real or surreal…. It’s all a bit on the nose there. But you remember the Riverdale of yore, when the narrative voice of Jughead Jones told you of the town’s darkest parts and its people’s darkest corners of hearts? And Betty going dark? And the twists and turns that made it seem like anything could happen?

Well, Candy does have hints of all of that, but safe to say that Candy is its own show, and one that will make fore a good binge watch. Or if you like Richa Chadha, hate ‘consuming content’ like it is some mission or job, then spend the weekend relishing this pretty good crime thriller-meets-folk legend that keeps you hooked until the very end. Or is it even the end?

‘Shang-Chi And The Legend Of The Ten Rings’ Review: A Marvel Origin Story That Looks Stunning, Is True To Its Asian Heart, And Has Action That Kicks Ass