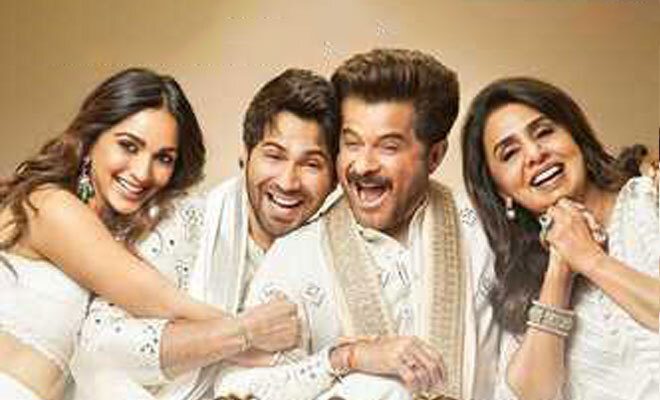 In A Double Whammy, The First Glimpses Of Karan Johar’s ‘Jug Jugg Jeeyo’ Have Dropped Along With The Release Date

A few months ago, Karan Johar gave us a surprise announcing his upcoming movie called  Jug Jugg Jeeyo starring Varun Dhawan, Neetu Kapoor, Anil Kapoor and Kiara Advani. While we are yet to see what the film has to offer, the movie is awaited by all and has been spoken about for a while. After a long wait, Varun Dhawan has finally given us something exciting to talk about.

Varun Dhawan shared the first glimpses of Jug Jugg Jeeyo on his social media earlier today. Along with him Dharma Productions, Karan Johar, Anil Kapoor, Neetu Kapoor and Kiara Advani have also shared the video and posters of the first glimpses of Jug Jugg Jeeyo. The video shows multiple clips of the star cast in quirky poses as a family. There are some pictures where they can be seen laughing and somewhere they are quite serious. They can be seen bonding as a family with laughter and emotions. The background has the quirky track of Jug Jugg Jeeyo playing. Varun Dhawan captioned the post saying, “Get ready for some family comedy – famcom Are you ready to come to our family reunion with your family?”

Also Read: Kiara Advani Recalls Her Struggling Days, Reveals Manish Malhotra Helped Her When She Was Being Rejected By Designers

Posters of Jug Jugg Jeeyo have also been posted and other than Varun, Neetu, Anil and Kiara they also featured Maniesh Paul and Prajakta Koli. I am super excited to see their role in the film. These glimpses have dropped along with the release date of Jug Jugg Jeeyo which is closer than you think! June 24, 2020, is when the film will drop in theatres.