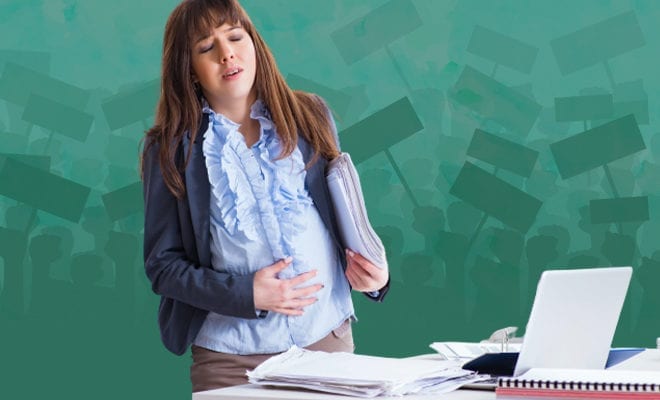 A Pregnant Woman Was Asked To Finish A Work Meeting After Her Water Broke. Why Do We Romanticise Women Overworking?

Demand and supply are two sides that are often in a dynamic power struggle. If there are more jobs and less qualified people to occupy those, they’ll be attracted with competitive salaries, great perks and employee-friendly policies. But if there are fewer jobs and more takers, the employers can lower the salary, overwork their employees and exploit them, knowing they wouldn’t want to leave. And if they do, there are many takers who would love to jump in. In India, as an employee, your potential is measured in how much you can stretch yourself thin to get work done, even if it leads to mental health concerns and burn out. Sure, not every boss is like that. And if you’re a woman – someone who is expected to be a multi-tasker, self-sacrificing and pain enduring, things can get worse. Being a pregnant woman takes it one step higher!

Recently, a woman took to Twitter to share the experience of her friend who was forced to finish off a meeting after her water broke. “Friend’s water broke during a board meeting. She says, “I need to go to the hospital my water just broke! “Lead investor from well known fund says, “Ok, but can we finish the meeting first?” She finished the board meeting in the car while en route to the hospital. WTF.”

Friend's water broke during a board meeting.

She says, "I need to go to the hospital my water just broke!"

Lead investor from well known fund says, "Ok, but can we finish the meeting first?"

She finished the board meeting in the car while en route to the hospital.

I have questions. What would have happened if she had just said, “No, this can wait”? Would she be fired? Would she lose an appraisal/promotion? Would they passively be cold to her for choosing to go to the hospital in peace? What is happening here? Is the employer to be blamed entirely? Or the culture we cultivated that puts sacrifice and overworking women on a pedestal?

Netizens were equally riled up by this hideousness. The woman is pregnant, her water broke, calm the f*ck down, everyone!

“If this happened in the final month (>36w), then why in heavens name was this person at work at all in the first place?” a guy questioned. Really, why was she working till the very moment her water broke and after that?

“This crap is not just at board level. My wife had a miscarriage and was on her way to the hospital and I was telling my then boss (a woman in her 30s by the way) that I had to leave and why…her answer was “but you wouldn’t be much use there…”” another guy wrote. What is the point if even women don’t empathise with other women? Like wouldn’t she need her husband by her side? Of course, mental health is not even considered.

“I worked the entire day I was in labor with my daughter – meetings all day (kept post it notes of how far apart my contractions were) – then went to the hospital an hour after my last meeting to give birth. This happens in the startup world and corporations. It’s appalling,” another user added.

Another user shared how they were forced to take a meeting after their father died, “I had an investor ask me to keep a meeting hours after my dad died. I literally followed the vehicle carrying his body back into town and kept the meeting. Because when you’re underfunded and underrepresented you don’t have the luxury of saying “due to personal reasons …”

“I worked at a large corporation and received two calls while laboring at hospital. I had thought for well wishes but they asked work questions. 2nd one my husb said i was very busy and couldn’t talk. They- “oh. We thought she’d be done by now”,” a woman wrote. Because it’s as simple as getting your eyebrows done.

“I once had a friend who had a STROKE! And couldn’t make it to a conference in which she was expected to present. Her boss still asked her while in the hospital if she could try to make it,” another user shared. You could be dying and your relentless boss would still be like can you finish the meeting before you breathe your last?

“Worker told me that she informed her boss that she was rushing to the hospital to her dying father’s bedside. Boss still called her cell phone because he had an urgent question that couldn’t wait. She works in a school office. F these guys.” Contemporary capitalism at its worse!

Even if she could have said no and didn’t, it’s not her fault. “Ask a fish what water is. When the whole ecosystem is telling you that your health is less important than this deal, your priorities get skewed,” a user seemed to offer some clarity.

Wtf is this shit?
Let the woman rest jeez. pic.twitter.com/hnj2qRQyvp

Honestly, when it comes to women this trend is replicated at home as well. You know, because women doing house work are considered unpaid labourers. Recently, a guy shared a picture of his mother cooking, while being connected to an oxygen cylinder. And the guy was all like singing praises. Hello, you call that a rewarding behaviour? What are these men who sit around like useless potatoes while their mother on oxygen support is cooking?

A four month pregnant woman made headlines for tending to patients while also fasting for Ramadan. A pregnant policewoman was spotted regulating traffic in scorching heat. Why? The world won’t end without you doing the job. This shouldn’t be encouraged.