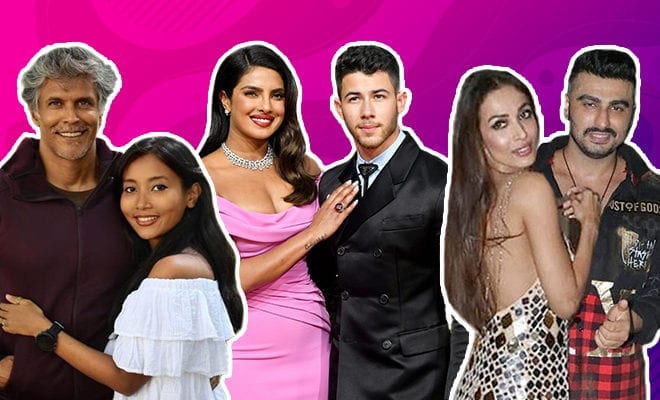 5 Horrible Things Couples With A Wide Age Gap Are Often Told. We Need To Stop

The thing with us humans is that whenever we are faced with something that goes against the social conditioning we’ve had, we come to think of it as not normal. That’s human race’s fatal flaw and the biggest obstacle between us and a more tolerant world. Imagine, how many years it took for LGBTQ+ rights to be recognised by Indian constitution and yet we are still far from legalising same-sex marriages. Similarly, when we talk about a bigger age gap between two consenting adults who choose to be together – it doesn’t go unnoticed. People talk, gossip, and troll – because they think this is so odd. How can someone marry someone that old? But love and maturity doesn’t entirely depend on age.

Be it Milind Soman – Ankita Konwar, Malaika Arora – Arjun Kapoor, Kareena Kapoor – Saif Ali Khan or Priyanka Chopra – Nick Jonas, couples with a wide age gap are trolled and how. But here they are, trying their best to not let such negativity affect their relationships.

When Ankita Konwar married Milind Soman, a lot of remarks were passed. Ankita being a commoner was trolled and called a gold digger. They said she is in it just for fame and the money of being a celebrity wife. Even Kareena Kapoor was called a gold digger for going for a much-older Saif Ali Khan. And the older men? They’d say they are just smitten by the women’s youthful appearance.

Priyanka Chopra was attacked on a global scale when she married Nick Jonas, who is 10 years younger. When the guy is older, he doesn’t get that much flak. It’s usually when the woman is older they go on to call her “budhi” and all that. The trolls have subjected Malaika Arora to her wide age gap with Arjun Kapoor.

Our society has this really weird way of being ageist. If you have a wide age gap like Milind Soman and Ankita Konwar, they will say things like, ‘He is as old as her father.’ I mean, it’s not like every man in that age group will only be like an uncle to every young woman. They are individuals and they are not defined by the age. Same goes for women. People need to stop calling couples with a big age gap icky, as long as they are consenting adults.

This is such a common explanation people have for those having a wider age gap in their relationships. They will bring it down to your childhood and talk about you having daddy/mommy issues and hence you opted for an older partner. Erm, even if they have, what is your problem? You have the nosy aunty syndrome but can we do anything about it?

ALSO READ: Priyanka Chopra Asks Why No One Cares About The Age Gap When The Guy Is Older And She’s Got A Point

When they see couples with a wide age gap, they automatically think it’s just going to be a rebound or a fling. They will troll the couples and say things like, ‘Oh wait for a while and watch it crumble.’ They say it is temporary because they are using each other – for youth or for money. But here we are, Kareena and Saif had their second baby; Malaika and Arjun are going strong; Priyanka and Nick have a happy marriage. Things work out when they have to and age gap doesn’t decide that.

ALSO READ: Ankita Konwar Takes To Instagram To Talk About How She Deals With Trolls About Her Marriage To Milind Soman And Their Age Gap