‘Stranger Things 4′ Vol. 1 Review: This Nightmare On Hawkins’ Street Is Loaded With Scares, Themes, And 80s Nostalgia, But Is Best When It’s About Friendship

T’is the season of 80s nostalgia, folks, rejoice! I’m fresh off gushing about Top Gun: Maverick, which is a perfect sequel to Tom Cruise’s beloved 1986 aviation drama. And it is also Stranger Things week! One of Netflix’s most beloved shows is down to its final countdown. Stranger Things 4 is split into two volumes, with each of its nine episodes the size of actual feature films! Hey, as a fan, I wasn’t complaining or deterred by these numbers. Stranger Things isn’t just a show, it’s an emotion, steeped in nostalgia and love for the time when kids played outside and cycled everywhere, pretended to solve mysteries, aliens were way more fascinating than now, and these wretched cell phones weren’t around. The Duffer Brothers have cracked the code for 80s nostalgia and adrenaline-laced bliss. But Stranger Things 4 is so much more. It’s scarier, gorier, pulling your brain in multiple directions, and delving deep into the origins of the Upside Down, poised to give us answers and closure.

Oh and a new villain too! Our powerless superhero, Eleven (Millie Bobby Brown), has a new big bad to fight. In true Stranger Things fashion, it is m’ boy Dustin Henderson aka Dustybuns (Gaten Matarazzo) who christens this new mouthbreather with an apt Dungeons & Dragons-inspired name: Vecna. The spell caster. And what a spell he casts, friends, terrorising all of Hawkins with gruesome deaths of teenagers, scary enough to get even the sheriff’s department and parents involved!

But if you recall, my Totos, we’re not (just) in Hawkins anymore. At the end of Season 3, after Billy (Dacre Montgomery) dies a bloody death while saving El, and Hopper (David Harbour) sacrifices himself to take down the Commies (Russians) and help El close the gate to the Upside Down, our OG band is separated not just by plot lines but by state lines too. Joyce Byers (Winona Ryder) moves her kids Jonathan (Charlie Heaton) and Will (Noah Schnapp), along with Eleven, to California. Hopper, we know from the trailers, is alive and in a Russian prison being tortured. There’s also another thing creating the distance between these kids: They’re growing up. And a lot of how they process what happened during the Battle Of Starcourt and the resulting grief shapes their character arcs this season.

Joyce has a new gig, until a mail delivery shakes things up for her. El, who goes by Jane Hopper in school, misses the two constants in her life—Hopper and Mike (Finn Wolfhard)—and struggles to fit in. Will misses his best friend, too. Lucas (Caleb McLaughlin) is now a jock, much to the chagrin of Mike and Dustin, who hate that he ditches them and their newly formed Hellfire Club, headed by a fascinating new character, Eddie Munson (Joseph Quinn). And none of them is able to see how much Max (Sadie Sink) is hurting after losing Billy. Meanwhile, Steve (Joe Keery) and Robin (Maya Hawke) are working at a video rental store and each other’s wingmen, but are rather unlucky in love. Nancy (Natalia Dyer), a  school paper editor now, is in a cold fight with Jonathan because neither of them visited the other during spring break. And the queen without whose name you cannot spell America, Erica (Priah Ferguson) is whipping everyone’s asses at D&D and savage comebacks.

As our favourite gang hopes for a normal, right side up spring break, there’s a deadly war brewing in Hawkins that will thrust them into the Upside Down again. In true ST style, this season splits the characters into teams, each pulling at a different thread of the story, which will all come together in Volume 2. There’s Team Hawkins: Dustin, Lucas, Max, Steve, Robin and Nancy. There’s Team California: Will, Jonathan, his new pizza delivery guy friend Argyle (Eduardo Franco), and Mike, who was visiting El for Spring Break and gets pulled into the drama. There’s Team Russia, where Joyce and Murray (Brett Gelman) are trying to find Hop. And then there’s Team Superhero, which is Eleven minus her powers. In the words of another star of the 80s we know and love, mushkil toh nahi keh sakte par difficult zaroor hoga. But hush, have faith! And never tell Dustin the odds.

Stranger Things 4 episodes are super-loaded, and the horror is cranked up like never before

We’re getting seven feature-sized episodes, okay. And each episode has quite a bit packed into it, not just with adventure but also with the emotions that the teens and the grown-ups are working through. So you have all these teen drama tropes of friends drifting apart, couples and exes fighting, high school cliques and bullying, and kids just being kids. But you’ve also got themes of trauma, grief, depression, mob mentality, and covert government missions that don’t care for civilian life, all of which take dark turns pretty quickly. 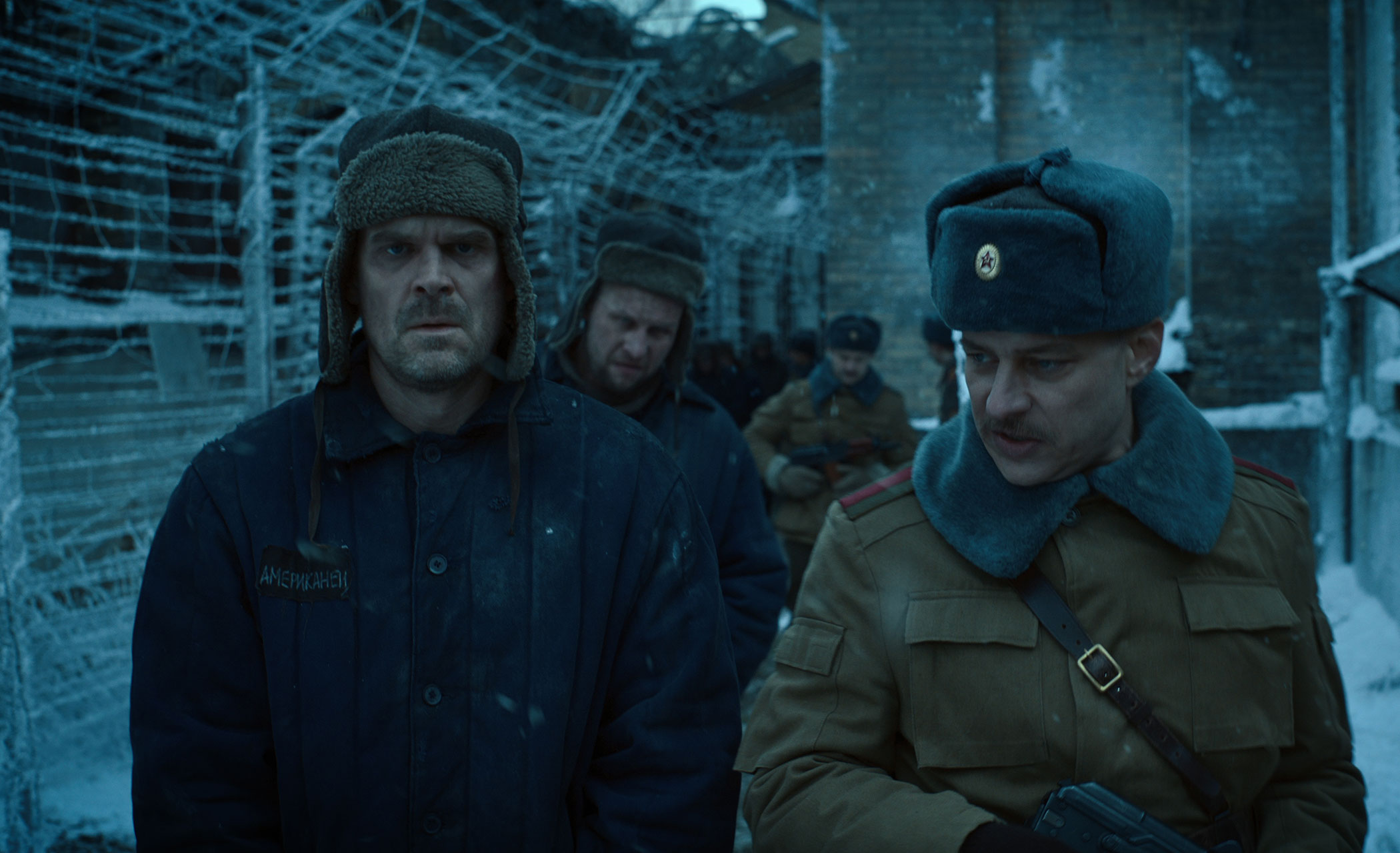 This season is poised to tie up loose ends and answer all the questions. With the characters spread out in different cities and chasing different agendas, it’s just “Go, go, go!” at all times. I only felt the time during the flashbacks scenes that delved into Eleven’s time at the Hawkins lab with Dr. Brenner aka Papa (Matthew Modine), but only because it slowed down the pace while every other character was just running around doing things. Now I know these scenes are crucial to the alpha and omega of the show, but it took me a while to understand what was happening there, and NGL it didn’t pick up until the last two episodes for me.

Season 4 is also the scariest, By that, I mean you’re going to get some MAJOR Nightmare On Elm’s Street nods, and I don’t just mean the Victor Creel scene with Freddy Krueger actor and horror legend Robert Englund. You’ll see, I won’t spoil it for ya. It’s dark, yes, the way Vecna leaves a trail of victims, much more sinister and creepier than anything we’ve seen, but it’s also proper, physical horror, which is definitely not meant for the faint-hearted.

One of my favourite exercises after watching a season of Stranger Things is trying to list the 80s callbacks and nods to pop culture of the era that is adoringly embedded by The Duffers in the show. I just wish our favourite gang could just get better haircuts; it’s my least favourite thing in this nostalgic treat. But everything else, from the video store to the outfits, from the music to the treatment of the truly scary scenes, is steeped in references from the 80s. I also think I spotted a Lord Of The Rings one, or maybe it was just a coincidence, I am not sure. Some of my favourite scenes are those when Dustin or any of the other characters let their nerd flag fly.

I thought nothing would compare to the Battle of Starcourt, but the Upside Down this season looks insanely good! I also think the visuals this season are fantastic!

I love the hoomans on this show, man (Do Demodogs call humans that?)! I think the heart of this show remains the characters and the relationships between them, for which they’re willing to jump into the most dangerous of situations without a second thought. I love the banter between the characters! Steve and Dustin, Dustin and Eddie, Steve and Robin, Nancy and Robin (oh yeah!), the other unlikely alliances that are formed as everyone joins in to solve the mystery. What’s also a nice twist is how the season shifts the parental arcs; hands-on parents aren’t so hands-on anymore, and those who barely bothered are suddenly gathered in concern. In fact, if I might be so bold, this season in so many ways is about children messed up by the way they were raised or treated by their parents and how their actions, thus shaped, can really destroy them.

Stranger Things has always been best in its lighter, bittersweet moments, which seem even more special now, perhaps because the kids are all growing up and because the show is ending. 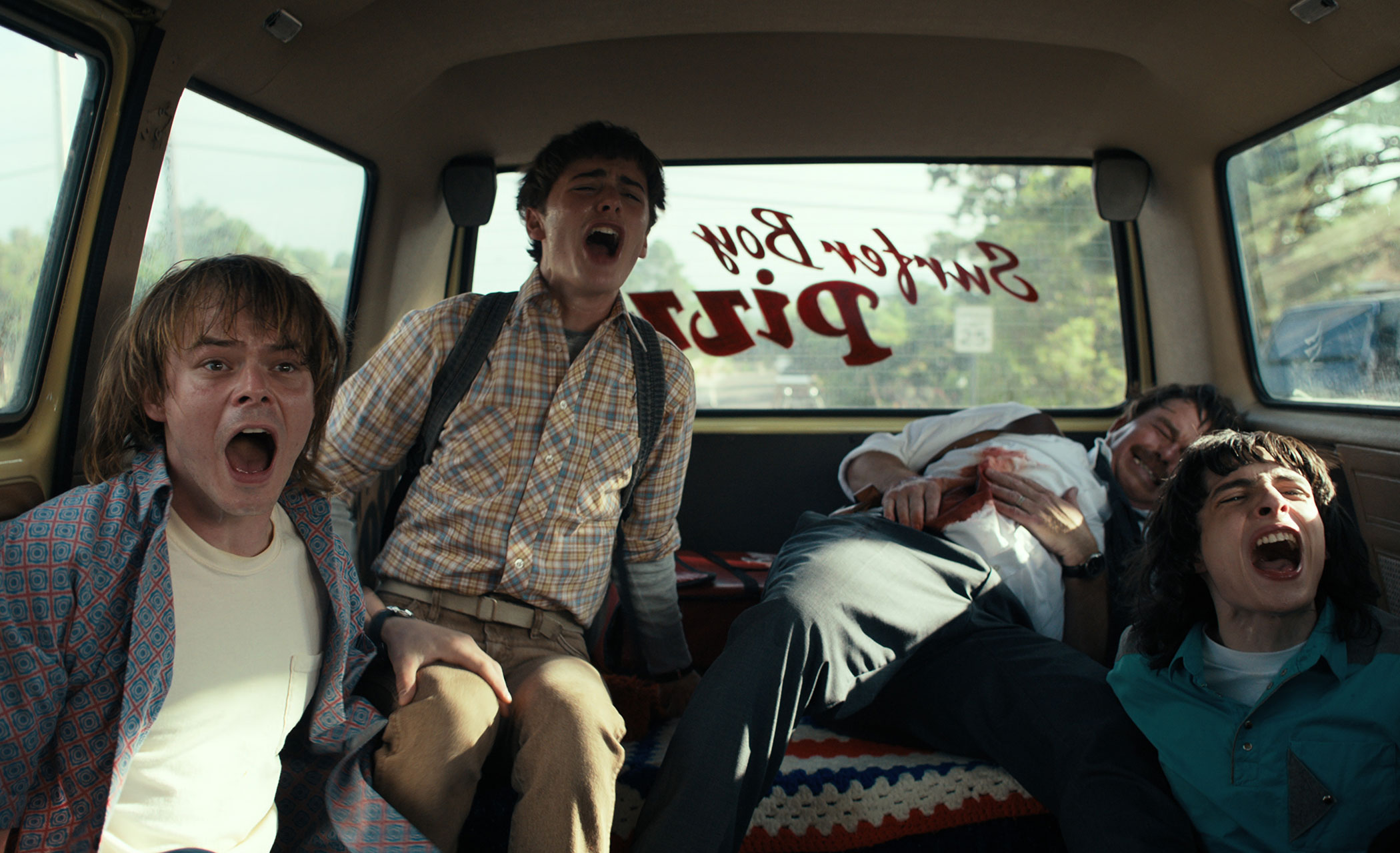 The performances and cast chemistry is what makes this show bitchin’!

Let me begin by appreciating the fresh casting for this season—Eduardo Franco as Argyle is hilarious, he really cracks me up. Joseph Quinn as Eddie Munson is an inspired choice, he is so magnetic and has the right balance of innocent and freaky, which is apt for the character he is playing and he is my favourite this season. Jamie Campbell Bower as Peter Ballard is perfect too—so breathtakingly beautiful and yet that air of deranged lurking in the shadows! Of the OG cast, I hands down LOVE Dustin, Steve, Robin, and Erica. This team got stuck together last season and I honestly am not over the collective and individual awesomeness of Gaten, Joe, Maya and Priah! Every scene they’re in just instantly becomes likeable!

Millie Bobby Brown is, well, Millie Bobby Brown. She’s consistently excellent, even when her storyline becomes a bit of a snoozefest in the middle. The flashbacks also give us more Matthew Modine, another excellent performance. Sadie Sink, though, is the rising star who really shines through. We get a lot of Max scenes this season as she grieves a brother who was not always a good sibling but who died a gruesome death while saving others. It’s a complicated relationship she is mourning, and Sadie brilliantly portrays the complex emotions that Max feels. 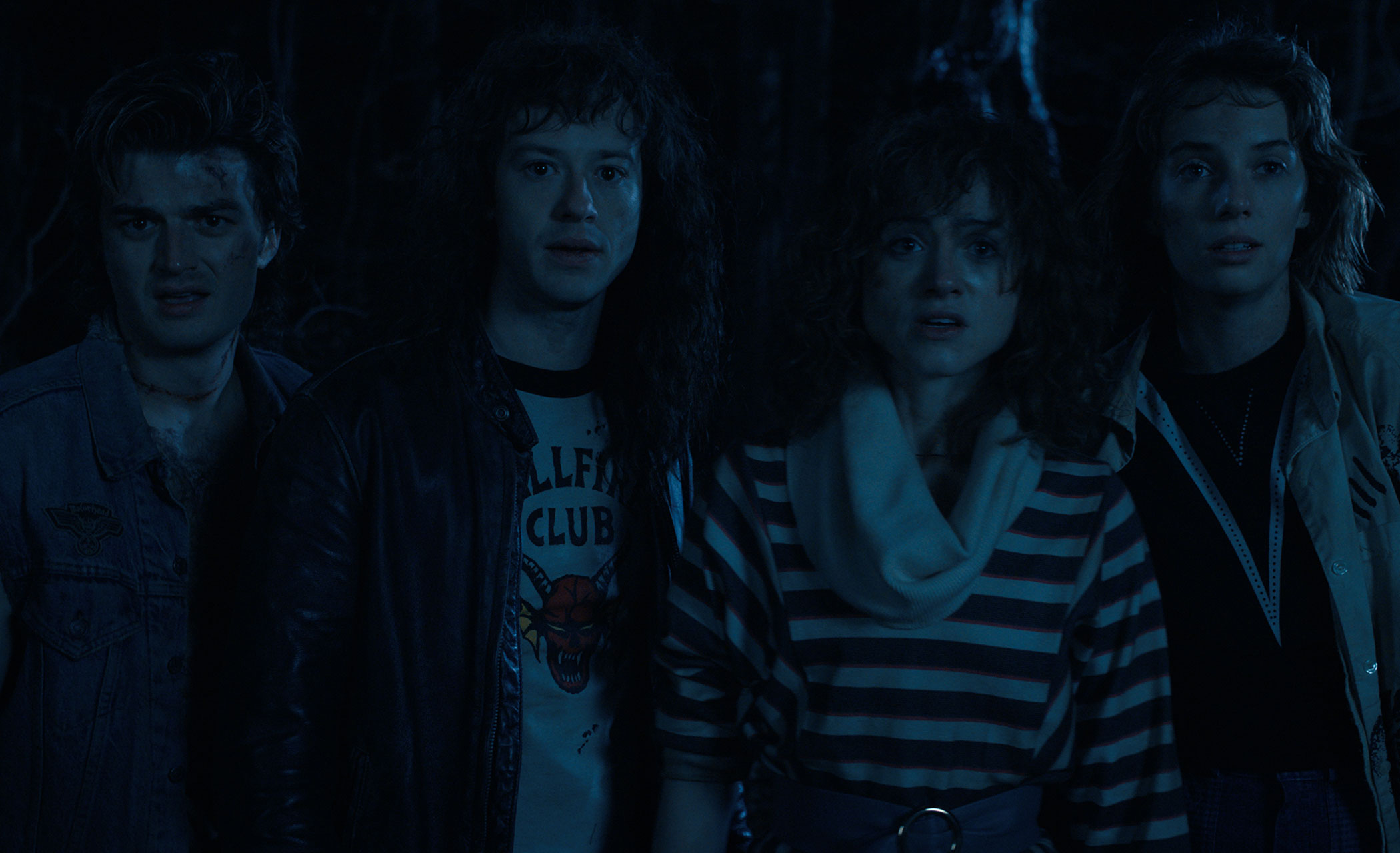 And finally, we don’t get much of Winona Ryder and the California team this season, which I am assuming changes next season. I feel like the show would only come full circle if Will Byers had some major part to play in how this all ends considering it began with his disappearance. And I just want some joy(ce) for my man, Hopper, yaa!

Stranger Things 4 offers up so much in its humongous seven-episode Volume 1 that you’re going to be in for a whole day bingeing it. I love that it goes downright scary, perhaps an indication of how scary growing up can be, having to deal with ‘grown up’ feelings and emotions, and understanding that superheroes and villains can actually have the same origin stories, but it is the people in their lives, the friends, the family, that really shape up who they become.

To keep this review spoiler-free means not discussing some of the best things about this season. But you already know, you don’t need the bait. This is the show’s most bitchin’ season yet. And while a girl can hope that the show was a neverending story, every beginning has an end. And this one is shaping up to be a pretty good one, with two more even longer episodes to go!

‘Bridgerton 2’ Star Simone Ashley Talks About The Painful Effects Of Her Corsets In The Show. Fashion Really Killed It Here