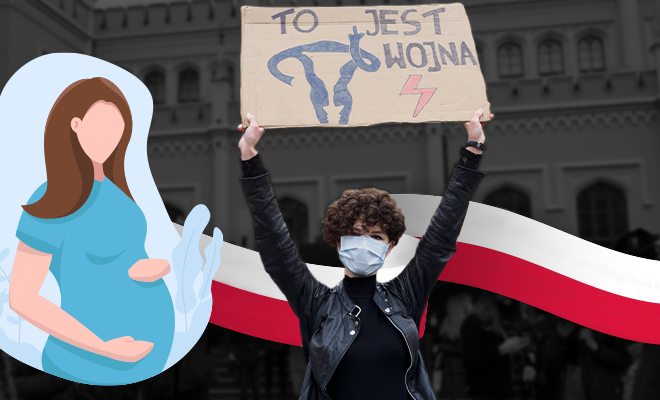 Women In Poland Take To The Streets To Protest Against The Government’s Near Total Ban On Abortions. Women Need Their Choice Back!

I’d like to think that the first time I am going to get pregnant, it won’t be unexpected and that it will be a pleasant surprise. Whatever it is, it will be a result of my choosing. But just because your eggs decided to fertilise with a particular sperm, even when you’re not ready doesn’t mean you’re obligated to have a child. And this decision is entirely the woman’s and her partner’s or both of theirs to take. Not for the government or nation to intervene, even if it veers towards abortion. Or so we would have liked to believe, except, we can’t. A dilemma that the women in Poland find themselves in, as the government introduces even more stricter abortion laws.

Protesting even in these times, the public of Poland has taken to the streets women raise their voice against the near-complete ban on abortion announced by the conservative governing party. Their actions came about after a ruling on Thursday by Poland’s constitutional court that declared that aborting foetuses with congenital defects or which are malformed, is unconstitutional. Which is not only shocking but worrying.

And considering that about 98% of abortions last year took place when it seemed like the foetus would have congential defects, this decision seems entirely ridiculous. This takes away autonomy from a woman who should be able to decide whether she wants to have a child that would be at risk or not. Protests spread through the streets of Poznan, Warsaw, Wroclaw and Krakow, among other cities as broadcast images of farmers on tractors driving through the town of Nowy Dwor Gdanski in support of women’s reproductive rights also came about.

Thousands of women are protesting across Poland against new abortion laws https://t.co/GCa0Ma5PHc

A Poland court ruled that abortions for fetal abnormalities violate the country’s Constitution, effectively imposing a near-total ban in a nation that already had some of the strictest abortion laws in Europe. https://t.co/eWjSabSlAv

The signs read, ‘We want choice, not PiS terror’, and angry women, hungry for justice and choice chanted their way to churches, confronting the priests. A historic first time in decades, the women entered the church to hold their protests and raise an alarm and it is telling of how much they’ve unwilling to bow down to patriarchy now. After all, women aren’t baby makers, they have their own life and plans, ones that need not be so expendable to the society.

The women went up altar of the church, praying for the right to abortion, while others chanted “We’ve had enough”. Footage shows churchgoers screaming “Barbarians” at them in return. Except, are they really the uncivil? When it is the government that is furthering such draconian laws?

For my English speaking followers. It's bad in Poland right now and I'm really scared. Please, take a minute to read about this https://t.co/Y7CfghOtoy

Massive protests in many cities against the prohibition of the abortion in Poland.
This one is from Wrocław where there was also an anarchist block.
Also yesterday there were repressed people in Warsaw who were released today. pic.twitter.com/dyItwfenXB

It is disheartening to see that a life altering decision such as having a baby, one that would literally redefine the entire working of a woman’s life is being decided by law which invariably falls in line with misogyny. The fact that their own choice has been deemed irrelevant  with such laws is shocking and highly reflective of the ignorance that women are often subjected to.

While women’s groups are being urged to carry out their protests and express dissent in a civilized manner, seems like the water has flown over the bridge as they also decide to go on a nationwide strike by Wednesday. The singular purpose was only to make them realise how taking away the right to abort a child is going to add to their physical and mental suffering. And while their anger and need for change is coming at a time when they are already struggling with the threat of Coronavirus, it shows how important this is for the women. Last we checked, in Poland and everywhere, it is our body, our life and so the choice also needs to be ours.