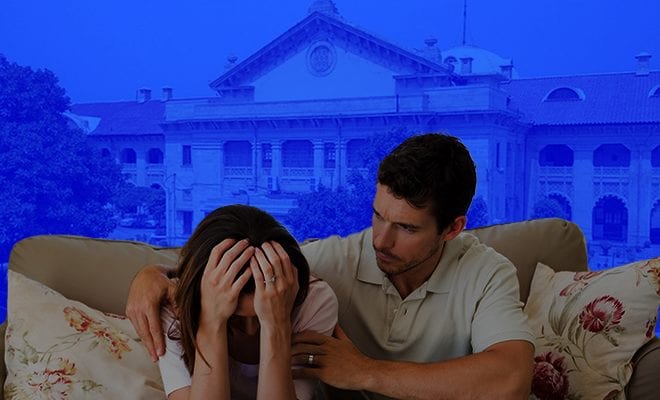 In India, if you end your relationship with your husband and you are not divorced yet, apparently it can get you in trouble if you stay with your boyfriend. I mean, what if a woman leaves her husband, starts a relationship with someone else and prefers living with him? Doesn’t she, as an adult have the right to choose where she wants to live and with whom she feels safe? Apparently, you don’t deserve protection if you have a live-in relationship while you are still legally wedded.

The Allahabad High Court refused to grant protection who wasn’t legally separated from her husband and was in a live-in relationship, saying it goes against the Hindu Marriage Act. More like goes against orthodox opinions that take women’s agency away from her?

A bench of Justices Kaushal Jayendra Thaker and Dinesh Pathak implied the live-in relationship to be an “illegality in society”. They asked, “Can we permit them to be in a live-in-relationship under the guise of protection of life and liberty?” The bench didn’t care about “for whatever reasons decided to go away from her husband.”

All the couple in a live-in relationship wanted was to be protected from coercion from the woman’s husband and in-laws. Tomorrow, if they go and kill her for the same, will the bench take responsibility? Will they say she deserved it because apparently she doesn’t deserve protection? In fact, instead of offering protection, they charged a fine of Rs. 5000 to the couple.

The Bench observed, “Can we grant protection to the people who want to commit what can be said to be an act which is against the mandate of the Hindu Marriage Act?”

ALSO READ: Couples In Live-In Relationships Must Not Be Harassed, Rules Allahabad HC. Some Relief Finally

There have been several liberal decisions from the high courts of India, including granting custody of the child to the mother, accused of an extra-marital relationship and offering protection to same-sex couples. However, this one is a regressive decision that takes away the right of women to live where they feel safe. This can encourage several women being stuck in an abusive relationship with her husband or a dead marriage even. As two consenting adults, it is their choice to be in a live-in relationship and such moral policing isn’t called for.