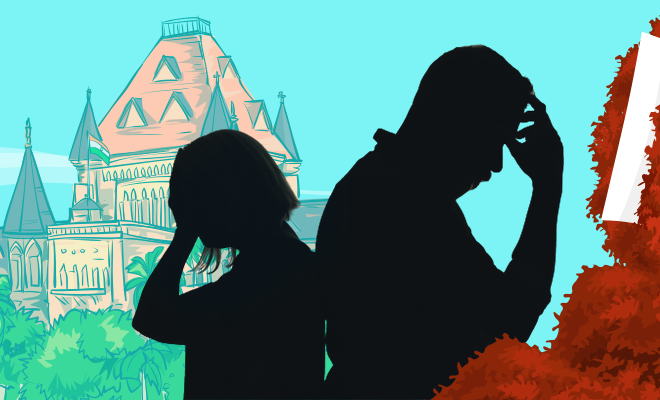 Man Files For Divorce Because Of Wife’s Habit Of Chewing Tobacco. High Court Says It’s Not A Valid Reason!

Marriages can be tough. No matter how much two people love each other, there will always be other things that play a deciding role in whether or not a relationship or a marriage will work. Things like compatibility, loyalty, commitment and honesty. But what does not make grounds for a divorce is someone’s habit of chewing tobacco. As recently observed by the Nagpur bench of Bombay high court when it was hearing a plea of a husband for divorce on basis of the wife chewing kharra.

You see, it is natural for a person to have their own likes and dislikes. There might be things you’d approve of in your partner and things that you do not, but when it comes to making it the reason to file divorce who you’ve been together with for almost 9 years, you need more than just a filthy habit ruled the High court and rightly so.

Upholding the judgement of 2015 made by the Nagpur family court, bench comprising justices Atul Chandurkar and Pushpa Ganediwala stated that, “It’s the specific allegation that since wife was having a habit of chewing tobacco, he was required to spend a lot of money for her medical treatment. However, he failed to bring on record the medical papers & bills in support of this pleading.”

The court observed that the pleadings made by the husband to be granted a divorce are nothing but a part and parcel of married life. They said, “If the marriage is dissolved, their son & daughter would suffer a big loss & their welfare will be affected. In the best interest of both children, the marital tie shall remain intact. No case is made out by the husband to disturb the trial court’s well-reasoned findings.”

The Bombay HC's Nagpur bench refused to grant a divorce to a man who alleged that his wife had the habit of chewing tobacco.https://t.co/gmif5Gpbxq

Apparently trouble in paradise started stirring soon after their marriage in 2003. The husband filed a case on grounds of cruelty and argued that because of his wife’s habit of chewing kharra, he was made to incur heavy medical expenses. Adding to that, the frequent bickering and quarrel with the in laws, the man claimed he could no longer survive his wife’s company.

However, the court observed, “These charges are nothing but normal wear & tear in married life. The couple lived together for around nine years & the husband couldn’t produce specific instances of mental harassment to enable this court to adjudicate the case of mental cruelty in his favour. On the contrary, he admitted that in 2008 he was detected HIV positive & wife stayed with him till 2010. The instances of physical & mental harassment, as proved by her, are on better footing than him.”

Further to this, the bench stated that cruelty in a marriage doesn’t account to a few instances over a long course of marriage, but as a continued assessment. They concluded by saying, ““The ill-conduct must be preceded for a fairly lengthy period where the relationship has deteriorated to an extent that because of the acts & behaviour of a spouse, one party finds it extremely difficult to live with another. Mere trivial irritations, quarrels, normal wear & tear of married life, which happens in day to day life in all families, wouldn’t be adequate for divorce”.

GET HAUTERFLY IN YOUR INBOX!
Related ItemsFeaturedTrendingdivorce tobaccoman files for divorce on grounds of wife's habit of chewing tobaccoHigh Court rules that wife chewing tobacco is not enough grounds for a divorce