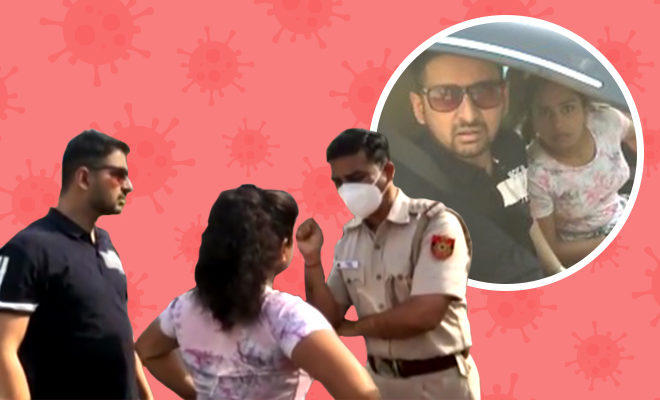 ”What If I Have To Kiss My Husband?’ Asks Maskless Woman While Misbehaving With Delhi Cops

Just a couple of weeks ago, I was busy making conference calls to all of my friends, trying to come up with ways we could bring in my 25th birthday. We were weighing out options – should take a mini trip, or go for a stay-cation? – given that the covid numbers had come down. Cut to two weeks later, Delhi’s cases are shooting through the roof and as the situation worsens by the day, the restrictions being imposed by the government are also getting stricter. As of moments ago, the capital has been put under a total curfew until the the morning of 26th April.

And while one would assume that such actions from the government is to give the public a hint as to just how grave the situation is, there will always be a few people who will take such a life and death matter casually. Case in point, this couple in Delhi that misbehaved with the police upon getting caught for violating Covid restrictions.

The Delhi police has registered a case against a couple that has been booked for not wearing a mask while travelling and also for travelling during the hours of the weekend lockdown. However, this is not the only reason that the couple has come into light. Turns out, the two went to the extent of arguing and misbehaving with the police, by yelling at the cops instead.

Also Read : Actresses Who Have Been Hit By The Second Wave Of The Coronavirus Pandemic

“What drama are you people doing in the name of corona?,” the woman can be heard shouting in the video clip that was recorded by one of the police personnel and that has now gone made viral . The two who have been identified as Abha and Pankaj, are both residents of the Patel Nagar area.

Upon being caught, the woman first started to fend herself by claiming that she was the daughter of the sub-inspector, after which she moved on to share how she too has cleared the UPSC. It was here that a cop asked her to responsibly behave and take accountability for her actions, considering she had passed the UPSC exam.

This is what they said …

More than that, repeatedly questioning why their car was stopped, the woman then started to shout at the police saying, “I will kiss my husband. Can you stop me?” Going on to argue and shout, despite the police telling them how wearing a mask inside the car was also mandatory due to the current covid numbers, the woman made quite a scene. A woman police officer had to be called on the scene who took the woman in question to the station.

The man Pankaj Dutta was presented before court this morning, and the woman shall too be arrested soon. Keeping in mind how grim the situation of corona is, especially in Delhi, it was only justified to take this action against the couple who thought it was above the law and could provoke the keepers of it.

Delhi has been reporting its highest Covid numbers since the last few days. On Sunday, the national capital reported over 25,000 cases.

Also Read : 41 People Test Positive For The Coronavirus After They Attended A Swingers Convention In New Orleans. This Is Shocking.