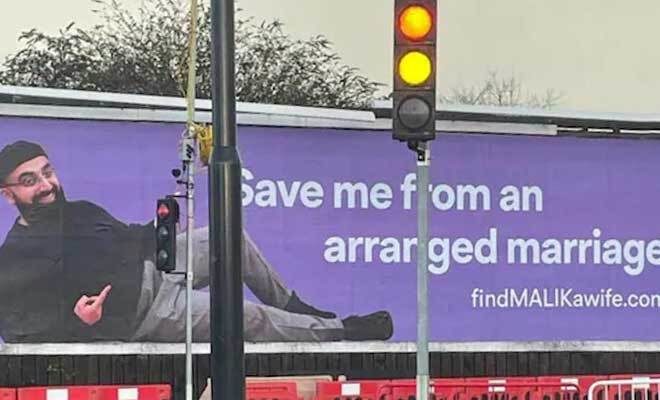 UK Man Advertises Himself On Huge Billboards To Find A Wife So He Can Avoid Arranged Marriage. We Feel You, Bro!

You may have heard that people can cross any limits to find true love but will you advertise yourself on a billboard or create a website to find a perfect partner? Well, a UK man has already tried it and it is going quite well for him. People were shocked and amused when they saw a man on billboards on the streets of Birmingham. In the billboards, the man is lying down and pointing at a line that reads, “Save me from an arranged marriage.” The billboard also includes a link to a website titled ‘Find Malik a Wife.’ Okay, this is so hilarious!

The man, named Mohammad Malik, is 29-year-old and lives in London. He is an entrepreneur and also works as an innovation consultant. He describes himself as a slim and 5ft 8-inch tall man who is creative and loves to do the most absurd and random things. Well, that is quite evident from the billboards. Mohammad said that he just haven’t found the right girl yet. He mentioned that it’s tough out there and arranged the huge billboards to get seen. His ideal partner would be a Muslim woman in her 20s but he is open to any ethnicity.

Take a look at the billboard here:

you have to respect the hustle.

marriage CVs are the past. marriage billboard ads are the future.https://t.co/2YmxlTPCdb pic.twitter.com/Ul6IYHywCP

Malik mentioned that he tried other methods to find a future spouse such as rishta aunties and a few dating apps but it didn’t work. After that, he decided to advertise himself through billboards and websites. On the website, the UK man introduces himself and mentions his hobbies, profession, age along with a video. He tells people to fill a form on the website if they are interested in him.

Malik claimed that this unusual method is working for him as he has received a lot of responses. The billboards will stay up till January 14. We hope that he finds a perfect match for himself because he is actually putting a lot of effort into it.

Be Alert: Men Are Scamming Women On Matrimonial Apps, Asking Them To Pay Huge Sums For Gifts Or To Meet Them