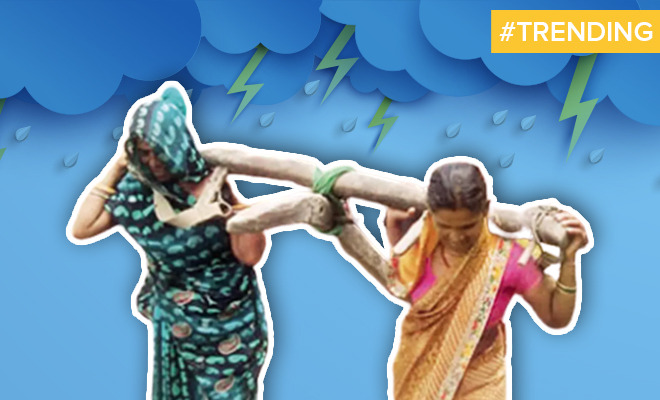 #Trending: Several Women In Madhya Pradesh Ploughed The Fields Instead Of Bulls Because Of A Superstition That This Will Please The Rain Gods. What Even?

When you do what I do, almost every day you come across a story that takes you by surprise. Though this one isn’t like that. You see, it’s no secret that Indians staunchly believe in superstitions. Some of these superstitions are as simple as don’t cut your nails after dark or walk two steps backwards when a black cat crosses your way. Though some are very complicated. For instance, did you know that in some cases a woman has to marry a tree before getting married to a man? Yeah, that happens. Anyway, today I wanted to talk about one such superstition that is putting the women of a particular village through some horrible conditions. Because that always solves every problem, doesn’t it?

In Madya Pradesh, the Bundelkhand region is drought-prone and it has been receiving extremely scarce rainfall. The farmers are afraid that this will completely ruin their crops. So to correct this problem, the farmers are trying to please the rain gods by making several women plough their fields instead of bulls.

I am sorry but does that sound absolutely bonkers to anyone else? I am sure they believe that putting women through all that pain of ploughing a field on hot summer day is going to bring them rain but come on. Although, I never knew humans could control the weather, did you? I thought only the universe and well, Ted Mosby could make it rain on command.

While those women in Bundelkhand are lugging a heavy plough on their backs and walking the around the field, did no one stop to think it was a cruel act?

The residents of the area say that it has not rained in the last 15 days. The soyabean and urad crops have sprouted and they need water to grow.

75-year-old Rampyari Bai, who is a resident of Peeperkheri said, “People in urban areas may term this practice as superstition, but this is a popular practice here in Bundelkhand. If women are replaced by bulls and plough the fields, the rain gods get pleased and monsoon is revived.”

Seriously, where do these superstitions come from?! How is a woman doing a farm animal’s job going to bring anything except pain and exhaustion for the woman? Look, I understand that with the horrible conditions of our farmers, they will try just about anything to ensure their crops yield well but this is pushing it a tad. Or a lot.

According to reports though, this “ritual” was followed by a feast.

Women can be seen lugging the plough on their back, walking the length of the field in the hot and humid weather

The farmers of that region are very worried about their crops. In fact, they are performing various pujas and rituals to make it rain. I highly doubt rain works that way.

The practice of replacing bulls with the women to plough fields was reported from  Peeperkheri village in Sagar district. Although people adopted the same rituals in other villages including Pipariya, Niboria, Niboda and Pandho.

This area had good rainfall in June and so the farmers were not expecting scanty rainfall in July. Rajaram, a small farmer said, “Last year, we got good rainfall. But this year the situation is very bad. And we are worried about our crops. If there is no good yield, it would be difficult for me to pay the loan.”

India is a country that is obsessed with ridiculous and baseless superstitions like this one. Superstitions are really going to be the end of us if left unchecked. For instance, in a gory incident just last week a man in Jharkhand beheaded a woman and carried her head to the police station because she was suspected of witchcraft. Why didn’t anyone tell me we suddenly live in the 1600s in Salem??

I don’t see an end to this though. Changing laws is easy but how do you change faith and a mentality that has been passed down generations? There is no procedure for that. Though looking at the state we are in because of these superstitions, I wish there was.

Women Around The Country Hold Coronavirus Pujas To Please The Coronavirus Goddess. We Don’t Know What To Say