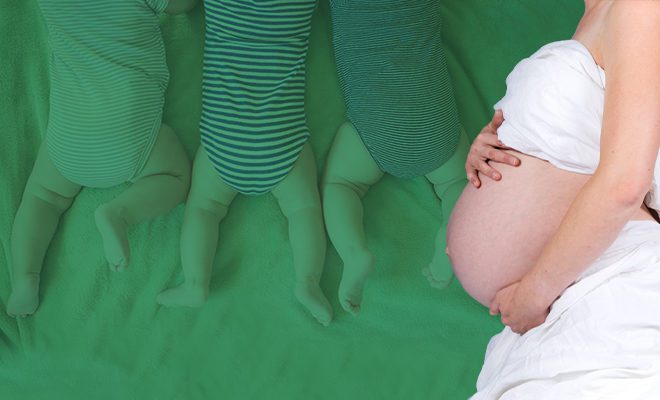 Children, as cute as they look from a distance, can be really a handful because you also have to raise them. Perhaps that is why even when I think of a time in future, when I would come around to the idea of giving birth, just the mere possibility of it being twins, giving me an extra baby than what I had anticipated for leaves me worried. Not to forget, accounting for the off-chance that it is a case of triplets! And even though it is said that the pain is just the same, whether you push out one, two or three babies, what happens when your triplets are apart by a decade?

And no, by that we don’t mean triplets being born with 10 years in between, but just in different decades! As is what happened with this woman from New York who had 5 days in between the birth of her first triplet and the other two, leading them to be born in separate decades altogether.

Kaylie DeShane, 33 years old and a happy and healthy mother to three babies has set a world record with the birth of her triplets. Becoming the woman to now have the longest interval between the birth of triplets, five days, 12 hours and 34 minutes to be precise, Kaylie’s experience of giving birth was like no other.

Also Read : A 25-Year-Old Malian Woman Has Given Birth To Nonuplets. The Doctors Had Said She Would Have Seven

Her first triplet, Cian, was born as a premature baby at 22 weeks on December 28, 2019. However, after Cian, the remaining two triplet weren’t born right away. Insisting on keeping the babies inside, the doctors decided to not let the other two babies be born prematurely and so, asked Kaylie to keep them inside a while longer.

That was up until January 2nd, when Kaylie again went into labour and that is when she gave birth to Rowan and Declan. Daily Mail quotes Kaylie saying, “After trying to fall pregnant four years, with my husband, Brandon, 35, we decided to try IVF. We already have an adopted son, Holden, seven, and a step-daughter, Naveah, 12, but we wanted a sibling for them. We decided to place two embryos rather than just one because we thought we would have a better chance of having a baby.”

She continued, “We were told that there was a ten per cent chance of it ending up being twins and a one per cent chance of it being a triplet pregnancy.” Which was indeed, true. But it wasn’t all so easy. Due to several complications, Kaylie was advised to terminate the pregnancy of two identical twins, in order to give a fighting chance to the third baby, for their survival posed a threat. However, Kaylie decided to not terminate any of her children.

The Mirror: Mum gives birth to triplets in two different decades after they arrive 5 days apart.https://t.co/6kqqmgdZG9

Going against all odds, even a surgery at 16 weeks when her cervix was failing, Kaylie stood strong. After 22 weeks when Cian was born, she shared how, “Nothing was happening and the doctors explained to me that they wanted to hold off delivering the next two babies for as long as possible because it was so early in the pregnancy.”

With a mere 9% chance of making it, Kaylie did the impossible. She held off the birth of two of her babies until 2nd January. Now, Kaylie and her husband have three healthy children, 2 boys and one girl, who are back in the embrace of their mother at their home. Isn’t that wonderful?

Also Read : Mother’s Day 2019: These Photos Of Celebrity Moms With Their Kiddos Is Absolute Love!