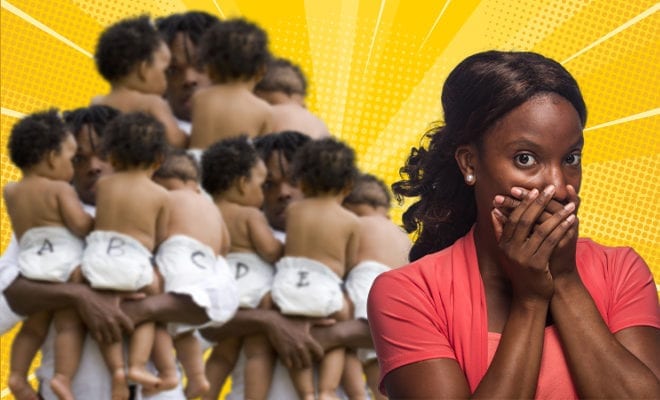 A 25-Year-Old Malian Woman Has Given Birth To Nonuplets. The Doctors Had Said She Would Have Seven

If I ever come around to the idea of having kids and find a partner in life with whom such family planning is possible , the maximum I believe I could go to is to have one child of my own along with adopting a puppy (or 5). But since both science and luck can be pretty funny, I am willing to make room for the possibility of being surprised by twins or even triplets. But what I would never imagine being surprised by is having 9 babies all at once! As is what happened with Halima Cisse, a Malian woman who gave birth to nonuplets.

In a rather unique occurence, 25-year-old Halima Cisse gave birth to what can be called an entire baseball team. her nonuplets have ended up fascinating the West African nation and attracted the attention of its leaders for reasons that are pretty understandable at this point.

Already anticipating the birth of 7 babies at once after her doctors had conducted ultrasounds in Morocco and Mali and come to the conclusion that there were 7 heartbeats in her crowded womb. Little did they know that they were missing out on detecting 2 more of their siblings.

#NSTworld A #Malian woman gave birth to nonuplets in #Morocco on Tuesday and all nine babies are "doing well", her government said, although Moroccan authorities had yet to confirm what would be an extremely rare case. https://t.co/jVJQF9Bf44

Also Read : Woman Gives Birth To Non-Identical Twins After Getting Pregnant With Another Child While She Was Already Pregnant.

Doctors of Halima had suggested in March, that since the delivery of babies could be complicated and she would require specialist care, she needed to fly to Morocco, which she then did. And then, much to her surprise and to her doctor’s, she gave birth to 9 healthy babies delivered by caesarean section.

“The newborns (five girls and four boys) and the mother are all doing well,” Mali’s health minister, Fanta Siby, said recently in a statement. Nonuplets that are rather difficult to have for variety of reasons and invite several complications. It is often even touted that the birth of some babies in such cases would not reach full term, but we are glad Halima and all her new born babies are healthy, happy and fine!

Also Read : Woman Didn’t Know She Was Pregnant, Gives Birth On A Flight While Travelling To Hawaii!