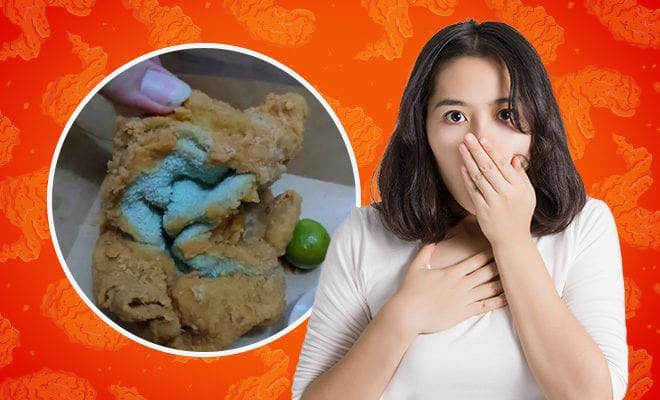 This pandemic has driven us into a zombie-like state. Floating through life just dreaming of the day we can finally throw all the masks away and not worry about social distancing. Although, right now, that day seems like a distant dream. Hence, all we can do right now is keep ourselves entertained. On that note, today I read an article about a woman in the Philippines who ordered fried chicken from a restaurant but instead got a deep fried towel. Whoever the cook at that restaurant is needs to rethink his career decision ASAP.

On Tuesday, this woman, Alique Perez, from the Philippines got the shock of her life when she tried to cut into her order of fried chicken. As soon as she took a knife to the dish, she realised that’s not a chicken at all. It’s not even edible. You see, the restaurant had deep friend a towel instead. A towel. I’ve heard of people serving other birds instead of chicken but a towel, seriously? This has me ROFLing.

When the order arrived, she tried to cut some chicken for her son. Big mistake. Alique was deeply disturbed to learn that what she thought was the chicken was actually a towel. Someone had deep fried a towel.

Also Read: This Woman’s Video Has Some Men Convinced That Women Shed Their Skin After Their Period. It’s Hilarious!

Alique said, “Just something that frustrated me this late. We had Jollibee delivered via grab. Ordered chicken for my son, while I was trying to get him a bite, I found it super hard to even slice. Tried opening it up with my hands and to my surprise a deep-fried towel. This is really disturbing… How the hell do you get the towel in the batter and even fry it!?!?” Further adding, “So disgusting and embarrassing… to think that you’re even branched in BGC. There’s a first for everything. And this has been the worst first! Calming myself down for this… But WTH. The essence of the towel contaminated the oil and the batter from the supplier so how many chickenjoys are affected? We won’t know.”

We’ve all found the occasional hair in our food. Or even gotten the wrong order sometimes. But this is an incident for the ages. I just want to know how did the restaurant not realise that they’ve dunked a towel in batter and deep fried it? It’s as shocking as it is hilarious.

On Wednesday, the restaurant, Jollibee, issued a statement saying that they’ve forced to close the branch in Bonifacio Global City for three days to ensure something like this doesn’t happen again. The restaurant said, “We are deeply concerned about this matter and have conducted a thorough investigation of the incident. It is unfortunate that deviations from Jollibee’s standard food preparation procedures occurred on the part of certain personnel of the store.”

Is shutting the restaurant down for three days going to change their carelessness? I don’t think it’s enough. We don’t know if this was deliberate or an error but there needs to be a strict check on their health violations. This incident must’ve completely ruined fried chicken for Alique and that’s the real crime here.

How bizarre is this?