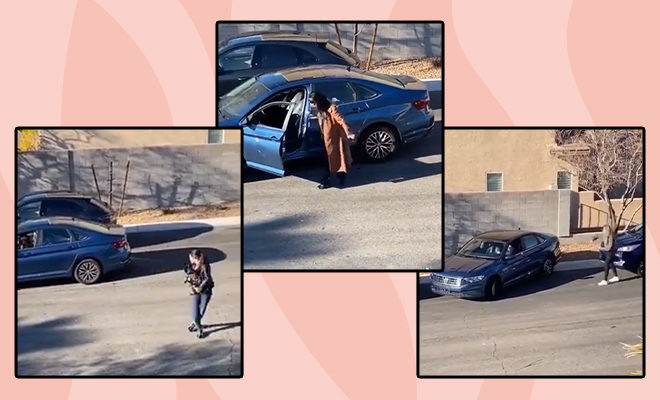 Much to my father’s dismay, I’ve never been a good driver. I get anxious, impatient and I have lost control on more than one occasion. My father has been trying to get me interested in cars since I was a baby but he never succeeded. A lot of people see driving as therapeutic and enjoyable. From where I stand though, it’s just plain scary and difficult. I mean, how does one remember and control so many variables all at once? Okay, not a lot of people can relate to me right now, can they? The only reason I am ranting about being a bad driver is that I feel bad for laughing as hard as I did at this woman whose parallel parking video is going viral like wildfire. The ending of the video had me in splits!

The video of a woman struggling to park her car between two cars is going viral after it was posted on TikTok. The clip features a woman trying her best to parallel park her car on the side of the road. She pulls in and out of the spot, unable to park correctly. After numerous tries, another woman helps her out but the ending had me rolling on the floor with laughter.

There is a point in the video where the woman is desperately trying to park her car and another woman, who is walking her dog, gets so scared that she protectively picks up her dog and sprints off. At one point, the frustrated and hapless driver even got out of her car and tries to measure the space she has by counting the steps. As hilarious as it was, her actions were useless, she still couldn’t figure out how to parallel park her car.

The way I screamed after watching the end of this video! 😩😩😩😂 pic.twitter.com/gTmu58sezO

Also Read: This Woman Went Overboard With Her DIY Turmeric Facial And Ended Up With Yellow Skin For Three Weeks. It’s Hilarious

Finally, another woman arrives and guides the driver. With adequate guidance and a little coaching, she is able to perfectly park her car. However, here comes the twist. After helping the driver ace parallel parking, the women hug. Then, the woman who helps her out gets into the car behind and drives off. I died. If the woman had done that in the first place, the woman struggling to parallel park wouldn’t have had to do all that.

Ever since being uploaded on social media yesterday, the video has garnered whopping 7.4 million views. Everything about this video is hilarious. In the woman’s defence though, parallel parking is not an easy skill to master.

This Italian Man Walked 450 Kms To Cool Off After A Massive Fight With His Wife. We Think It’s Funny