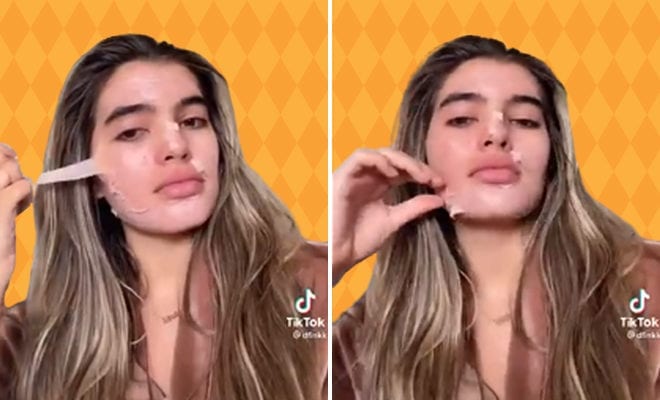 This Woman’s Video Has Some Men Convinced That Women Shed Their Skin After Their Period. It’s Hilarious!

A few years ago, I was travelling to Lonavla with my then boyfriend. As soon as we reached the hill station, I realised that I had started menstruating. Needless to say, I was in immense pain. So, being the sweet guy that he was, he offered to run to the pharmacy and get me a packet of sanitary pads. It was actually hilarious because he was absolutely clueless and borderline embarrassed to go up to the cashier. It took him three trips to get it right and even then he kept referring to my periods as the Bloody Mary. Which was equal parts funny and annoying. But that’s the day I realised that men have a very skewed notion of what menstruation is and what happens. And while it’s imperative that they are correctly educated, it’s kind of difficult to not pull fast ones on them. I mean, haven’t you noticed men will believe just about anything you tell them about menstruation? It’s just hilarious!

We can’t blame the men for being as oblivious as they are. At the end of the day, it all boils down to the very prevalent taboo that surrounds the concept. At least a lot of them are trying to be more sensitive and are willing to learn. However, when I watched this video of a woman who has managed to convince men all over the world that women shed their skin when they are menstruating, I could not stop laughing.

Model and aspiring actor Dakota Fink posted a TikTok video of herself peeling off what seems to be a skin-coloured face mask. The text on the video reads, “Throwback to when men didn’t know we had to peel off layers of our skin after our period.” Obviously, she was only trying to mess with a few men, little did she know that that this video, which was captioned, “How did they not know this?” would blow up on social media. It has garnered over 2.2 million views on Twitter alone.

Also Read: This Hilarious Video Of A Woman Struggling To Parallel Park Has Gone Viral

Dakota’s hilarious video managed to convince men all over the world that men really do shed skin once a month like snakes. A lot of them were amazed at this new discovery. They commented and sympathized with women because we have to go through so much. This has to be the prank of the year!

However, the best part of it all is that a lot of women also went along with this hilarious hoax. One woman said, “For everyone saying theirs hasn’t started peeling yet: everyone’s body is different so of course we all wouldn’t start at the same age. kinda like how we don’t get our periods at the same age. mine started peeling at 17 while my friend’s started peeling this year at 24.” Another wrote, “I saved the skin I shed after my first period and I’m planning to give it to my daughter someday.” Okay, that is very creepy but it would make a good horror/thriller movie plot.

As I said earlier, men are clueless about menstruation and a lot of them are freaked out by the very concept. This is the result of years of superstitions and taboos. It’s vital that they are taught and given the correct information. However, silly pranks like this never hurt anyone, right?

This Woman Went Overboard With Her DIY Turmeric Facial And Ended Up With Yellow Skin For Three Weeks. It’s Hilarious