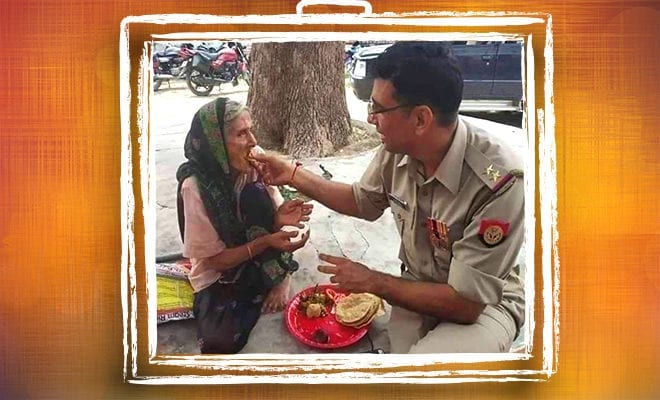 There are two things that have become clear as day thanks to this pandemic. One, we can’t ever take our health for granted again. And two, despite all the political and religious unrest, in times of crisis we can blindly rely on our community for assistance. The way people have come together to help one another during these unprecedented times is just wholesome. It’s probably one of the very few good things that have come from this godforsaken pandemic. I say this after seeing this picture of a cop feeding a homeless woman that has gone viral. It’s tugging on all the right heartstrings!

During these difficult times, the police have been our pillar of strength. They’ve gone above and beyond their duties to ensure the safety of all citizens. From bringing cakes to people who were quarantined by themselves to helping people avail of medical services, they’ve outdone themselves. But this heartwarming picture that was recently posted by Paralympian Rinku Hooda has really taken the cake. It features a cop from UP feeding an elderly homeless woman. This adorable picture has taken social media by storm.

Rinku captioned the post, “This is also a side of the police.” This picture went viral on social media like wildfire. Netizens from all around the country expressed their love and praise for this cop’s heartfelt gesture. In no time, this picture was winning over hearts. I know that the UP police don’t have the best reputation. Especially not when it comes to women. But it’s genuine moments like these that allow the entire UP police force to redeem themselves.

This isn’t the first time, in the last few weeks, that a cop helped out an elderly woman in need. Just last month, a Delhi police officer carried an 82-year-old woman in his arms to a vaccination centre after she expressed her desire to get jabbed but couldn’t walk. It was all so wholesome.