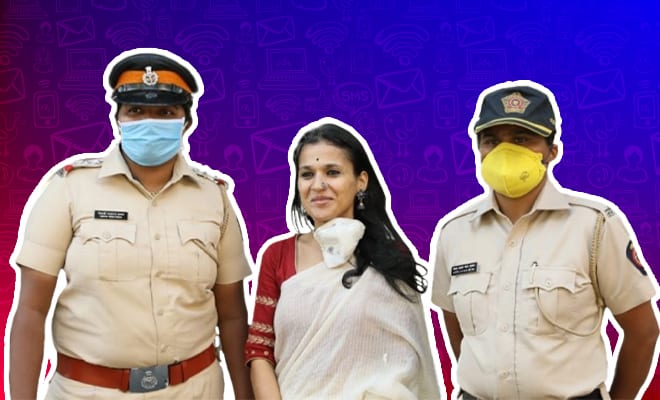 One my all-time favorite guilty pleasures, apart from sleeping for hours is to casually lurk on social media and entertain myself with some hilarious memes and tweets that some people post. And off late, if there is one account that always has me smiling with its quick wit and how they capitalise on topics that are trending, it is the Mumbai Police official twitter page.

From  tweets about “Masks ko abhi alvida na kehna“, to how “Cheete ki chaal, baaz ki nazar aur virus ke spread par sandeh nahi karte. Kabhi bhi infect kar sakti hain,” there is probably no one who does sass better than the people running the Mumbai Police’s social media account. And that mind if that of  Sunchika Pandey, she’s the the lady responsible for making us all chuckle.

Showing a rather new, improved and less threatening side of the police to us, by turning their warnings and cautionary messages into hilarious one-liners, jingles or even smart puns, Pandey along with a team of creative peeps, runs the show for Mumbai police as well as other law enforcement bodies such as the BMC on social media. And the more interesting part being, she shares how the entire department contributes into creating something fun and informational.

This is Arturo
Arturo thinks he is very smart
Arturo keeps 1234 as his PIN
Don't be like Arturo#PinHeistAlert#ASpinToPin#OnlineSafety pic.twitter.com/HeS7rWh5VR

Also Read : In Mumbai, Three Policewomen And A Pedestrian Helped A Woman Give Birth In A Police Van

Sunchika Pandey runs HAT Media, which is an agency that handles social media for such enforcement bodies. Sunchika who is also a former crime journalist shares, “The police department has been a very active part of content creation in terms of writing as well as ideation sometimes. They actively take part in setting protocols, in terms of deciding the tone of conversations. They are the spine of this system.”

She continued to also point out how, “There was always this perception that since it’s a law-enforcing body, cops will scream and they will shout. They look like very strict people who only want rules to be followed. I think this is a perception that needed to change.” And that is where she and her team stepped in.

'Reunite' with your F.R.I.E.N.D.S – but only after the final season of #COVID19 please?

“Maybe in 2014, it was not such a possible scenario, but now everyone knows that it is a human being in that khakee and they are also a person like you and I are,” said Pandey making quite a point. After all, in this day and age, and with so much crime all around that almost all of are on the edge, it is imperative to find a way to get through to the public. And seems like Sunchika was able to do just that by engaging with the people in an unprecedented and interactive way.

Pandey talks about what makes her create the content she does, and says, “I think raising awareness is their primary focus so they wanted a medium that reaches the maximum number of people. If we’re making content, it has to be relatable to youth. Therefore, they have always agreed to indulge in topics that are related to music, literature or any form of art and current affairs as well. Since the attention span is so little now, if something has just happened and you see content made out of it, you will definitely remember it. So we like to be very updated and topical.”