This Nail Salon In Russia Used Real Fish In Their Nail Art. Eww

In today’s day and age, if you want to run a successful business you have to keep generating ideas that are quite out-of-the-box. If not, before you realise it your business will have become obsolete. At the end of the day, it’s cutthroat competition. And while, most of the time, this means that new concepts and quirky trends are always taking over the market, sometimes businesses come up with the weirdest, most bizarre ideas. For instance, in a bid to gain attention, a nail salon in Russia started using real live fish in their nail art. Erm, wtf?!

Isn’t it enough that people use fish for pedicures and massages? Now they’re being put into nails as well? It’s disgusting. In their latest nail art tutorial videos, Russian Nail Salon, Nail Sunny, created a mini aquarium in an acrylic nail. In this mini aquarium, they inserted a real fish in the tip of the fake nail. Needless to say, once the video went viral it left people fuming on social media. It also came under fire from animal rights activists who called this aquarium manicure animal abuse. 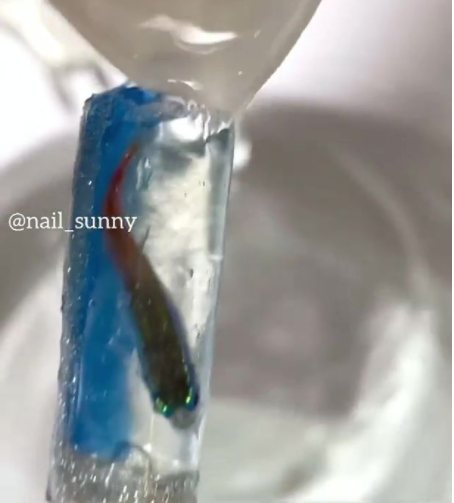 Also Read: This Woman From The Philippines Ordered Fried Chicken From A Restaurant And Instead Got A Deep Fried Towel

The video started out as a normal manicure tutorial. It showed a nail being prepped and coated with an aqua blue and silver glitter polish. Until this point, it all looked pretty decent. But things took a nasty turn when the camera cut off to a group of fish and one of them was scooped up and poured into this acrylic aquarium. The fish is almost as long as the nail and is unable to move around in the cramped space. Nail sunny captioned this bizarre video, “The fish were not harmed and returned to the pet store”. Since when are fish considered to be accessories?

I don’t understand why they did this in the first place. It’s not cute or pretty or funny. Nail Sunny really deserved all the backlash they got. Netizens claimed that even though the fish were returned to the pet store, they were stressed out and traumatized and hence it counts as abuse. Even the PETA UK Director Elisa Allen conveyed her dismay and demanded an investigation by the local authorities for animal cruelty. She said, “Using animals as if they were nothing more than beauty accessories is sad and stupid. There’s no excuse for ripping sensitive fish out of their natural habitats and confining them to tiny, artificial enclosures – let alone ones attached to people’s nails.”

We are all for new beauty trends but using fish or any other kind of animal is shameful and sickening.

Bad Flirt Alert: This Man Accidentally Sent A Group Text To 13 Women Asking Them If They Were Single