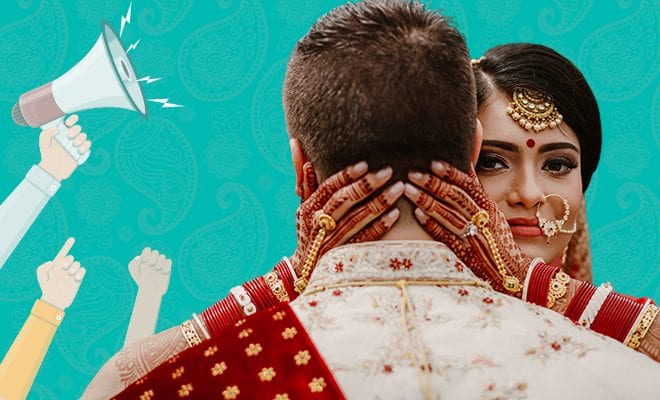 This Is Getting Out Of Hand. Three People In Mumbai Harass A Woman Over Her Decision To Marry A Muslim Man

Every time the topic of marriage, specifically my marriage, pops up, my mother asks me to go find a man myself (what if it was woman?)  Here’s the catch though. Even though my parents are liberal and easy-going, they’ve made it very clear that they will have their reservations if the person is of a different faith. The cultural changes will be too much, they say. I have no such qualms. I strongly believe that love should be beyond religion. Unfortunately, our society does not have that outlook. They treat inter-faith marriages like it’s a crime worse than murder.

Recently, a woman in Mumbai’s Khar West area was all set to marry a Muslim man. However, one day, two men and a woman allegedly began harassing the woman and managed to brainwash her parents against the whole notion of inter-faith marriages. This woman was finally helped by Activist Teesta Setalvad.

According to reports, the woman is sticking to her decision of marrying her Muslim fiance. She says that since she is an adult, no one has the right to object. She then informed the Khar police station. They launched a probe and called the three people who went to the woman’s house. However, only the two men showed up and began spinning a tale. They completely denied that a woman had accompanied them and insisted that they went to the woman’s house to enquire about her father’s health.

Also Read: In Karnataka, A Muslim Family Sponsored A Hindu Girl’s Wedding And Also Helped Her Family Through A Financial Crisis

After the police investigation didn’t lead anywhere, civil rights activist Teesta Setalvad offered to help the woman. She said, “It is most disturbing and shocking that such incidents are being allowed to take place through an organised nexus between the registry and gangs of people associated with organisations opposed to freedom of choice.”

Why can’t people just live and let live? Inter-faith or not, who a person chooses to marry is a personal decision. We have to move beyond this regressive mentality and stop harassing people for every small thing.

Punjab And Haryana High Court Says Muslim Men Can Marry Without A Divorce, But Women Can’t.