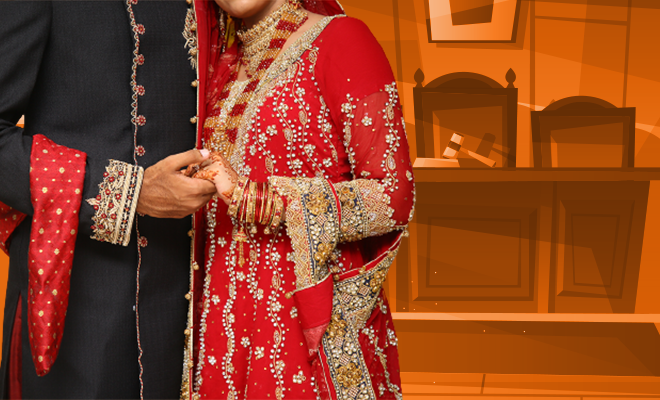 Punjab And Haryana High Court Says Muslim Men Can Marry Without A Divorce, But Women Can’t.

After giving it a lot of thought, I have come to realise why it is that despite decades worth of efforts by women and women rights organisations to reduce gender gap between men and women, we are still stuck struggling for opportunities that have been handed over as entitlements to men,   It is because deep down society prioritises the interests of a man over a woman. Whether we like it or not, the reason why gender bias still exist is because we continue to fan the flames that allow it to grow. And we say this after the recent statement of Punjab and Haryana High Court where it implied that a muslim man need not get divorced for a second marriage, but a muslim woman would need to.

Dripping with patriarchy and sexism, the judgement from the Punjab and Haryana court has been made under the existing Muslim Marriage Act 1939 as it reinstates that a Muslim man can marry another woman without taking a divorce from the first wife, but a Muslim woman has to take a divorce for her second marriage.

Announced by Justice Alka Sarin while hearing a petition that sought the protection of a Muslim couple of Mewat district in Haryana, as they both claimed to be married previously. The woman shared that since the marriage was against her will, she decided to get married to her lover. However, the families of the couple were against their decision and even threatened to kill and evict them from their property.

A Muslim Man Can Indulge In Polygamy but Not A Muslim Woman: Punjab & Haryana High Courthttps://t.co/ZlBoG0Q7fn

During the hearing with the court, the couple’s lawyer pleaded with the court that since the two were Muslim, according to the religion, they are allowed the second marriage. This is where the bench claimed that the couple’s marriage is illegal as a Muslim man can marry more than once without divorcing his first wife, but if a Muslim woman has to marry someone, she will have to divorce her first husband under the Muslim Marriage Act 1939.

Even though the practice of triple talaq in the Islamic culture had been criminalised so as to protect the interests of women who could be abandoned anytime, anywhere after the simple declaration of talaq three times, the fact that there still exists considerable bias in the kinds of entitlements given to men in comparison to women is what is worrisome.

On a very intricate level, it is such non-contesting judgements that end up promoting and glorifying the existing misogyny in our society.

Also Read : A Woman On Twitter Said Wearing Hijab Is An Evil Practice, Not A Choice. Millennial Muslim Women Think It’s A Choice Most Women Don’t Get To Make