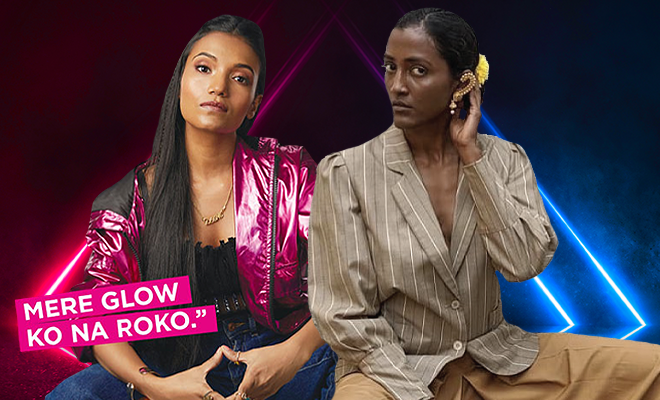 This Girl Posted A Video On Instagram Talking About Her Thoughts On The New Glow And Lovely Ad Campaign. She Is So On Point

All my life I have been told I wasn’t “good looking enough”. Being held up to impossible beauty standards and compared to my friends who were fair and tall really took a toll on my self-esteem. Then as I grew older I realised that I am not alone and this concept of judging people based on their skin colour is called colourism and it’s extremely prevalent in our country. I was called names like “kaali” and told on a daily basis that I needed to apply fairness creams (Fair/Glow and Lovely was highly imposed) and haldi paste so that I could look presentable. As a teenager, I always wondered why dark-skinned women, like myself, are treated like scum while our fairer counterparts are put on a pedestal. It took me a long time to get comfortable in my own skin and tune all the negativity about my complexion out. Which is why I raise my voice against colourism every chance I get. No one should be judged so harshly because of the unrealistic beauty goals we are forced to meet.

You know, I was very glad when the BlackLivesMatter movement gained traction around the world. At least in that way, people started talking about how insensitive and problematic colourism really is. But the biggest game changer came when HUL announced that they are changing their fairness cream, Fair and Lovely. Now, because of tremendous social media pressure, they are calling it Glow and Lovely. It’s all a steaming load of crap if you ask me. Pardon my language. The way I see it, all HUL did was change the name of a problematic product and hope it would solve the issue.

Ideally, Fair and Lovely or whatever it’s being called should be taken off the shelves. Why? Well, this fairness cream has been cashing in on women’s insecurities and making money by propagating the “fair is better” ideology. We’ve had enough of that, don’t you think? It’s time we start focusing on the people and not fixating their skin-colour.

Speaking of Glow and Lovely, if you follow Hauterfly then you know that merely a few days ago, we spoke at length about their first ad campaign- “Aapki Glow Hai Aapki Pehchan. Is Glow Ko Naa Roko.” Needless to say, we were less than pleased with the video. Not only was there a lack of representation of dark-complexioned women, but the whole concept is utterly ridiculous. All they have done is change the name of the fairness cream and its branding but it’s still a fucking fairness cream. That much is very evident from the tagline and video of the campaign. So, decades of taking advantage of women’s insecurities was not enough?

Now, the reason I am talking about this again is that I came across a video shared on Instagram by a girl called Seema Hari. In the video, she talks about her thoughts on the new Glow and Lovely advertisement. We are loving this video and Seema so much right now.

Also Read: Another Company To Drop The Word ‘Fair’ From Its Soap Range. Are Brands Really Being Inclusive Or Just Succumbing To Social Pressure?

Seema starts out by talking about how despite changing the branding, Glow and Lovely is still a fairness cream. She says it still has skin lightening ingredients and harmful chemicals it had before, not one thing has changed except for the name of the product and they have been capitalizing on their “inhumane marketing” strategies for 45 years and they still continue to do so.

Number two on her list, she talks about how irritating the video was. She talks about how the tagline, “Mera Glow Meri Pehchan” is horrible because why should a glow be our identity? She says that the word “glow” it’s just a less controversial word than fairness. I am relating to her so much!

Moving on, she talks about “light-skinned feminists” who are using this opportunity to praise Glow and Lovely. They don’t get to decide if the brand has made enough amends. Number four, Seema talks about how colourism and casteism are interlinked in our country. We can’t talk about one without touching upon the other. Which again, is a very valid point especially right now. Seema concludes her video by saying, “Fuck Glow & Lovely”.

Honestly, she hit the nail on its head. This Glow and Lovely campaign is problematic. Changing the name does not solve any issue. All the issues that Seema listed down are precise and on point. In just one day, she has over 63,000 views on this video. That’s amazing because the more people know just how idiotic the campaign is, the faster we can get it taken down.

After watching the video, I did what I usually do. Read the comments. Honestly, I was expecting there to be some negativity or some hate but the support that Seema got for this video and the amount women that agreed and related to her was just overwhelming.

One woman wrote, “Gurll I couldn’t relate more! Having been prescribed these shit creams since childhood, we grow up to feel a constant lack of being whole and perfect. And now this shit company goes ahead to involves itself in our identity? What the fuck? What more is left? We have had enough.” Another one wrote, “You just Just spoke my heart out…everything was on point”

We really need more women like Seema who are not afraid of speaking their minds. In her words, “Fuck Glow & Lovely I have better things to do.”