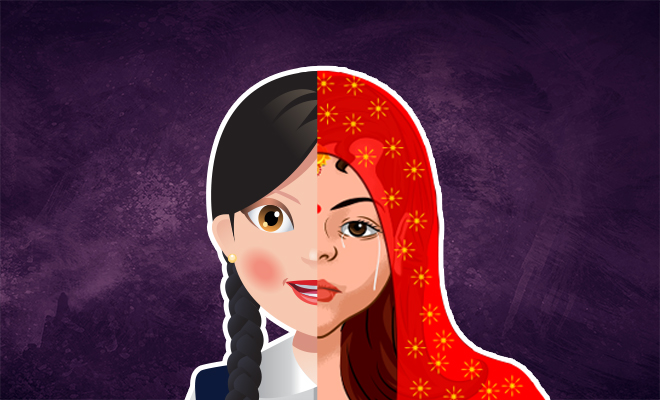 The Number Of Child Marriages Has Gone Up Significantly. Girls Are Being Married Off Due To Poverty And Because They’re Seen As Liabilities

The vulnerable position of women, especially young girls, in Indian society is not brand new. We read, hear, and talk about making our country a better place for the girl child all too often, but often the steps taken towards this barely make a dent. It’s worse in the face of a tragedy like the coronavirus outbreak, because girls are more vulnerable – their situation worsens significantly. While some girls face mistreatment within their own homes and are now silently stuck with their abusers, others still have no resources to reach out to even if they want to. The implications of schools being shut during the lockdown have been much worse on young girls from economically weaker sections of society.

Due to financial constraints, these girls might be forced to drop out of school. Many children rely heavily on midday meals provided by public schools. India has the largest number of anaemic women in the world, and with reduced income and no midday meals, we are now looking at a health crisis among young girls and women. In many rural areas, girls get their sanitary napkins from school. Female students are suddenly cut off from needs that we consider extremely basic and essential.

Through all of this, a horror that has continued for centuries has once again come to light. The lockdown has caused an increase in child marriages. This happened after multiple tragedies like the Nepal earthquake in 2015, the Ebola crisis. Girls in Indonesia, India, and Sri Lanka were forced to marry widowers following the 2004 tsunami. They even received subsidies from the state to getting married and start a family. Child marriage has deeper, more horrific roots than we ordinarily assume. It is a survival strategy for many.

ALSO READ: A 16-Year-Old Girl Was Forced Into Child Marriage In Telangana During The Lockdown. When Will This End?

Just to put it in perspective. A very credible source tells me “the number of child marriages have increased as #COVID19 gets tackled..” What’s the connection? GIRLS ARE BEING SOLD FOR FAMILIES TO SURVIVE. #ChildTrafficking

“Many girls won’t return to school because they will be kept at home for caregiving, domestic work, farm grazing and marriage. Child marriage will increase exponentially as families already see girls as a liability and getting them married off will mean one less mouth to feed,” News 18 quoted Safeena Hussain, founder and executive director at Educate Girls.

This is no simple speculation. The UN has said that the pandemic could cause an extra 13 million child marriages in the span of the next decade. A report by global charity World Vision has also warned that increasing poverty is likely to put an additional 4 million girls at risk of child marriage.

Since the beginning of the global pandemic anecdotal evidence suggests spikes in child marriage across Afghanistan, India, South Sudan, and Yemen. Economic uncertainty, school closures, and food insecurity could be to blame: https://t.co/LOPIcJHlmU

“The government needs to ensure girls who are above 10-12 years who are at a higher risk of child marriages in particularly high risk areas have hostels to live in. They need to invest in setting up places for girls to stay,” Hussain said. She also believes that the issue of hunger needs to be addressed. “It can be take home ration or meals in schools, but hunger has to be addressed for children to go back to school.”

If the mounting effects of the pandemic are not addressed, young girls will continue to be at risk. In a country like ours, women and girl children face the worst brunt of a family’s income being cut off. They are the first to be pulled out of schools, married off, or even forced into child prostitution. Measures to ensure their safety need to be implemented fast.

ALSO READ: The Number Of Cases Of Domestic Violence Have Increased During Lockdown. The NCW Is Taking Initiatives To Fight It. But Is It Enough?