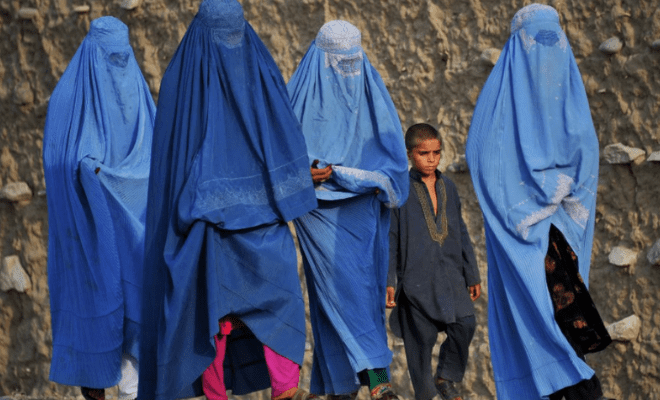 After Withholding Driving Licenses, The Taliban Decrees Afghan Women To Cover Their Faces When Stepping Out

A while back I covered a story wherein driving instructors in Herat, Afghanistan had been instructed by the Taliban to not issue driving licenses to female candidates effectively taking away their freedom to drive a car. The Taliban has now ruled that women are required to cover their faces which is a decree from the group’s supreme leader.

On Saturday, the Taliban announced that women will compulsorily have to cover their faces as it is a decree issued by the group’s supreme leader, Hibatullah Akhundzada. There is an escalation in the restrictions on women in public which is drawing international opposition along with opposition from Afghans themselves. A spokesperson from the Propagation of Virtue and the Prevention of Vice read out the decree issued by the supreme leader at a press conference in Kabul. He further added that a woman’s father or male relatives would be visited and imprisoned, along with being fired from government jobs if she does not cover her face outside.

According to sources, It was further added that the ideal burkha to wear would be the blue burkha which completely covered women’s bodies from head to toe. The blue burkha had previously become a symbol for the Taliban’s regime in Afghanistan from 1996 to 2001. Wearing a headscarf in Afghanistan for religious reasons is very common but in urban areas such as Kabul, do not cover their faces. The Taliban has been experiencing a lot of pushback from western governments but also religious scholars and Islami countries due to the increase in their restrictions on women’s rights.

Also Read: Taliban Has Verbally Asked Driving Instructors In Herat, Afghanistan To Not Give Licenses To Women

While the Taliban claims that they are not going to be as strict regarding women’s rights as they were in their earlier regime when they had strict rules against girls attending school and being seen outside without a male relative. However, in the past few months, the Taliban has started increasing the restrictions on women’s rights once again with restrictions limiting women’s travel without a main chaperone and banning women and men from going to the park at the same time.