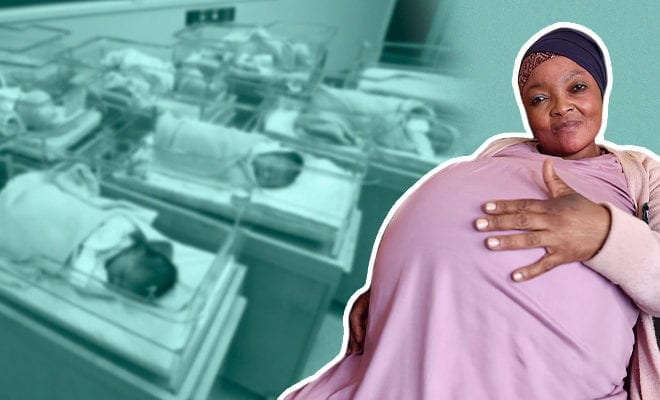 Just last month, I found myself writing one of the most astonishing stories where a woman gave birth to a mini baseball team as she gave birth to nonuplets! Hailing from West Africa, the Malian woman stunned most of us with the delivery of 9 healthy babies, considering imagining giving birth to even one is overwhelming. And now, a month later, we have a woman who has managed a one up over the Malian woman, as she gave birth to 10 children, setting a new world record for the world’s largest birth ever!

The record is currently held by the Malian woman named Halima Cisse, but just a month later, it has been taken over by this South African woman Gosiame Thamara Sithole who has recently had 10 babies in the same pregnancy. A claim that if approved by the doctors, will put her in the Guinness book of world records for having the largest birth!

The decuplets were conceived by the 37-year-old Gosiame in a hospital in Pretoria on 7 June and turns out, she was quite surprised about the fact, for she had been told by the doctor that she was expecting only 6 children. Except, when the time came, she gave birth to 4 more unanticipated children.

Gosiame Thamara Sithole (37) from Tembisa has given birth to a village breaking a world record with 10 kids at once last night. She delivered 7 boys and 3 girls. A true meaning of aiyate Sione. pic.twitter.com/pK2Bj15ZTm

Also Read : A 25-Year-Old Malian Woman Has Given Birth To Nonuplets. The Doctors Had Said She Would Have Seven

The mother who had twins earlier, this time around gave birth to seven boys and three girls who were all birthed through a caesarean section on Monday. And although it sounds fascinating right now, to see a woman give birth to 10 children at once, it wasn’t an easy pregnancy or delivery, the doctors say. In fact, it was a rather high-risk pregnancy where she feared at one point that not all babies would survive.

The babies are reported to have been born perfectly healthy and will be seen spending the first few weeks or months in incubators. Sithole’s husband, Teboho Tsotetsi spoke about how elated and overwhelmed he was as he said, “It’s seven boys and three girls. She was seven months and seven days pregnant. I am happy. I am emotional. I can’t talk much. Let’s talk again in the morning please.”

Come to think of it, it is a miracle in itself, to give birth to 10 babies at once and that too, unexpectedly. Sithole is now the record holder woman to have the largest birth in the world, by giving birth to decuplets!