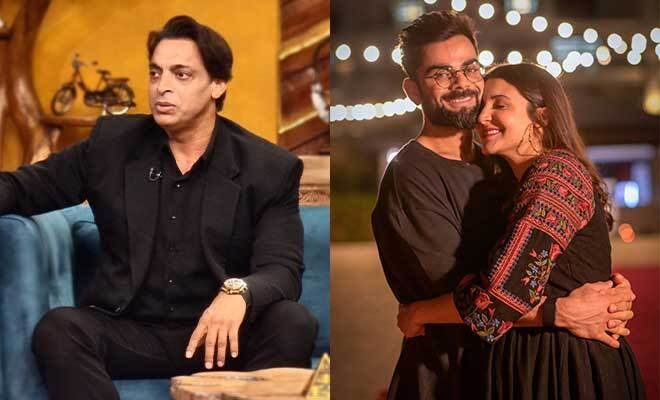 There’s no doubt that our country is obsessed with cricket and some die-hard fans like to keep themselves updated about the Indian Cricket team. But seems like there are a lot of fans of our cricket team in other nations as well and they are keeping an eye on the performances of every cricketer with loads of enthusiasm including Pakistani cricketer Shoaib Akhtar. Recently, Shoaib Akhtar said that he wanted ace cricketer Virat Kohli to marry after scoring 120 centuries. Erm okay, then! I see we’re back to blaming wives and girlfriends for sportsmen’s performances on the field. Real mature.

Virat Kohli is one of the most successful cricketers of all time. For quite a few days, he’s been dragged for his performance and his disagreement with the Indian cricket board over the captaincy. And recently, Pakistani cricketer Shoaib Akhtar who is quite famous for his controversial remarks gave an unnecessary statement where he blamed Virat Kohli’s marriage with actress Anushka Sharma for his performance. He said that he wanted the cricket star to marry after scoring 120 centuries. Talking about the pressure on Virat Kohli to deliver a good performance, he also added that he wouldn’t have married if he had been in the latter’s place and we are so done with the blame game now. And can Shoaib Akhtar explain to us what marriage has to do with Virat Kohli’s performance? They call cricket the gentleman’s game and wax eloquent about sportsmanship. Can someone show us where is the sportsman spirit in blaming a woman for something that is a man’s doing?

The statement may sound like he’s worried about Virat Kohli’s game but it’s actually filled with misogyny that is going on for a long time where Anushka Sharma is repeatedly being blamed for her husband’s performance. Shoaib Akhtar also mentioned that it’s Virat Kohli’s decision if he wanted to get married or not. Toh sir, aapne comment kiya hai kyun phir?

Also Read: Virat Kohli Dedicated His Second Half-Century In SA Vs Ind ODI Series To Daughter Vamika. People Are Awwing Over His Celebration

In our society, we often look past the husband’s mistake and point at the wife because we have this blame-the-woman mentality deep-rooted in the minds of people like Shoaib Akhtar and it needs to stop.

This 7 YO Girl Impressed Twitterati and Cricket Legends With Her Perfect Helicopter Shot. She Is Already A Star!