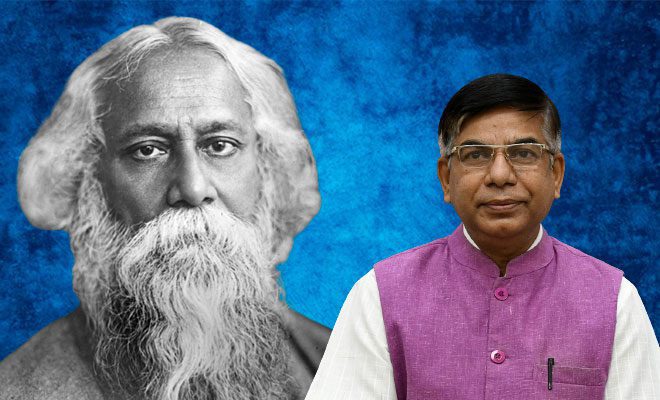 I don’t know what to tell you. Is it even surprising anymore that politicians, working the one gig which actually requires them to have a filter on their mouth, can’t even get that basic requirement right? I mean, come on guys, you had one job! If you’re wondering which politician has gone on and done what again, let me tell you. Union Minister Subhas Sarkar has gone ahead and made an unwarranted comment on the complexion of Rabindranath Tagore and how his mother refused to pick him up as a baby, during a university visit. And naturally, everyone, but particularly West Bengal’s ruling party TMC’s members, are livid. Read on for more details because it is downright incredible just how wrong the man’s timing and judgement was.

Subhas Sarkar is a doctor-turned BJP MP, who is a—wait for it—Minister of State for Education in West Bengal. On Wednesday, August 18, he was on a visit to Visva Bharati university, which—get this—is a university founded by Rabindranath Tagore himself. And it is here that the honourable MoS decided to make some pretty unfounded comments about the Nobel Laureate.

Sarkar began by explaining to his audience that in Tagore’s family, while some members were of a “bright yellowish fair” complexion, Tagore’s fair complexion ha a reddish tinge to it. And because of this, shall we say, ‘lesser’ fairness, Sarkar claimed that Rabindranath Tagore’s mother and many others family members refused to pick him up as a baby in their arms.

“There are two types of fair skinned people. One that are very fair with a yellowish hue and those who are fair but with a reddish tinge. Kabiguru belonged to the second category. Due to his not so fair complexion, his mother and many others in the family did not cradle Rabindranath in their arms or sat him in their laps.”

Now here’s what I don’t get. First, where is this coming from? What is the source of this information? Clearly, the Minister was sitting in not just a room, but probably an entire state full of Tagore scholars. So maybe he should’ve cited the source of this information before just pandering it! And second, considering the above scenario, what would possess him to make this statement here of all place? And third, which is probably the least of Subhas Sarkar’s problems right now but we should definitely address—why, in a conversation about such an illustrious man who is a poet and a Nobel Laureate amongst other things, has his complexion come up? Why can’t we as a country look beyond these trivial things?

Again, we don’t know much about the context of the minister’s mentioning of this nugget of trivia. But still, I think it is fair (pun intended) to say that there was no need. No wonder, people who didn’t see it coming are kinda pissed at him and want to denounce him and what not because they believe his remarks to be racist and having no historical credibility.

Prabita Sarkar, who is the former Vice Chancellor of the Rabindra Bharati University said that these remarks were “unexpected from an education minister” and he had no idea on what basis the honourable minister made these claims about Rabindranath Tagore. He explained,

“Tagore was not of dark complexion though people like his elder sister had described him as Rabi, our dark-complexioned boy. This was an exaggeration. Did the minister mean to say Rabindranath was as dark as Africans? Or he meant he had a complexion that was somewhat between fair and dark? The minister did not clarify. And will he say what he wanted to prove by referring to the complexion of Tagore? How does it matter? Did that matter for Tagore when he got the Nobel, did it matter for Tagore when he became a world visionary, a poet-writer-painter-playwright, a Mohican?”

A senior TMC leader went on to demand that Subhas Sarkar not be allowed into the university again because of this “racist comment and an insult to the icons of Bengal”.

However, Sarkar’s own party members, have defended his comments, saying that they were, in fact, against racism. How? Let BJP spokesperson Shamik Bhattacharya explain.

“Mr. Subhas Sarkar has neither said anything against Rabindranath Tagore nor his family. He has spoken against discrimination on the basis of the colour of skin. His comments were not at all intended to insult anyone. The TMC should stop politicising just everything,” said Bhattacharya.

In the same vein, former Tripura governor Tathagatha Roy said, the comments had been blown out of proportion, and were actually a reflection of the very society we live in. He cited the example of matrimonial ads placed by Bengali families, which always emphasise on a ‘fair-complexioned’ bride or groom.

Honestly, it is just weird that these things are randomly coming up. Again, we don’t know the full context of the speech by Minister Subhas Sarkar. But when other more pressing matters require attention, it beats me why there’s enough outcry and discussion over a historical figure. The alive ones need your attention, kind sirs. Why hast thou abandoned them in the dark? (Pun once again intended.)

Sharmila Tagore Says Her Father Once Blamed Her For Tiger Pataudi Dropping A Catch, And It’s The Most Awkward Thing!