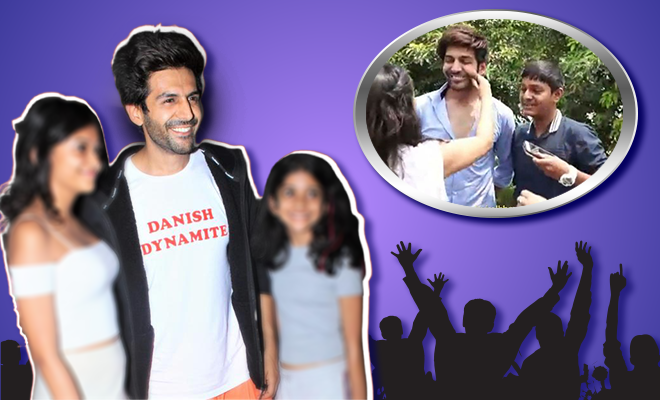 Pulling Celebrities, Pinching Their Cheeks Is Not Okay. Kartik Aaryan Was Extremely Patient With These Fans But We Need To Stop

A majority of people will tell you they hate going to overcrowded places. Even though Kareena says in Jab We Met “crowd hum jaise logo se hi toh banta hai”, put her in state transport bus, and she’ll have a different opinion. If you live in Mumbai, you will know the very value of personal space only after having travelled in local trains. When people are standing so close to you that you can feel their breath on your neck or whose armpits you end up making out with, involuntarily. You know who is going to be having sex tonight, who just had a fight with their boyfriend, whose boss is a dick. Personal space, what? You know how a lot of people don’t believe in ghosts. They say they can’t see spirits, so they don’t believe in their existence. But hey, can you not apply the same concept to personal space? Imagine, random strangers tugging at you, demanding to click pictures with you like they’ve paid you for it. Annoying, right? Not that it’s happening to any of us mango people, but celebrities go through this every day! Recently, a video of Kartik Aaryan surfaced online, in which he is being pestered by fans for a selfie. A girl even pulled his cheeks hard, and umm I don’t think it’s cool.

Kartik Aaryan was very patient and was seen interacting with the fans, probably around the airport. He’s being humble and nice and was actually asking them about their flight and where they are headed. He was even being concerned about them missing it. Although, it could be his attempt at cutting the interaction short. Anyway, he did say ‘thank you’ a couple of times. And we all know that’s a cue to end the interaction. But some of us are very oblivious to subtle hints and also, manners. And so one of the girls went ahead and pulled his cheeks. Which honestly is annoying.

Earlier, during the special screening of Hum Aapke Hai Koun..!, a girl literally pulled Salman’s arm to get a hold of him. Honestly, if a random stranger did that to me, I would be really, really mad at them. A very old video of Katrina Kaif shows a fan being extremely rude to her because she didn’t entertain them. This was right outside the airport in Canada and we know how tired we get after such a long flight. Why do we see celebrities as objects? In fact, I don’t even treat my things so roughly. It’s high time that we stop getting in their faces. I understand, people get crazy and it’s like a once-in-a-lifetime opportunity for several to see their idols. But it’s really inhuman to invade their personal space like it is your real estate and you have inherited a share in it. Ask for selfies, but accept no as an answer. Understand consent? Ask for selfies but do not get too close for comfort.

Most of the times, the stars oblige but I don’t blame them when they don’t. Or when they get mad at the shutterbugs and annoying fans.

On the work front, Kartik Aaryan has Pati Patni Aur Woh, Love Aaj Kal 2 and Bhool Bhulaiya in the pipeline.

UP Bus Stations To Now Have Breastfeeding Kiosks For Mothers. Still No Idea Why Women Must Hide But It’s A Start!