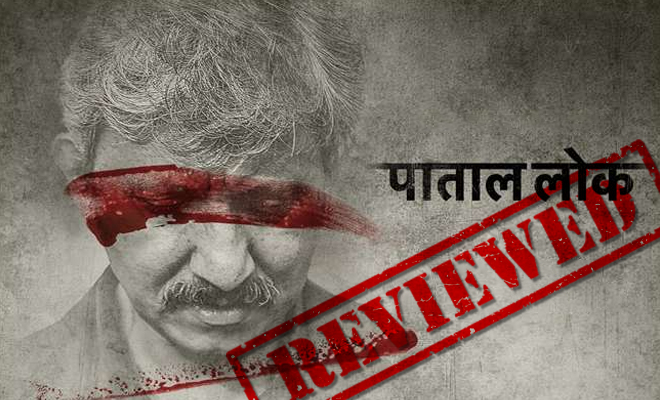 I stumbled upon Paatal Lok on Twitter, and it immediately caught my eye. Now I’ll be honest – I went into this show with the rather unfair assumption that it would be another gruesome cop thriller where everyone dies and the end switches things up completely. Don’t get me wrong, those films and TV shows are fun in their own way. In fact, I love them. But Paatal Lok goes deeper, and in a way that makes you say, “Why didn’t I see it like that? I should have!” This gritty, edge of the seat thriller is the need of the hour.

Central to the story is Inspector Hathi Ram Chaudhary (Jaideep Ahlawat), a Delhi cop demotivated and drained by his bleak career. His less than ordinary life takes a turn when he is assigned a high profile case involving an attempt to assassinate prominent journalist Sanjeev Mehra (Neeraj Kabi). And so begins a gripping tale that opens up some uncomfortable conversations that we are, perhaps, still not ready for.

Hathi Ram dives deep into the murky pasts of the four culprits – Vishal Tyagi (Abhishek Banerjee), Tope Singh (Jagjeet Sandhu), Kabir M. (Aasif Khan), and Mary Lyngdoh aka Cheeni (Mairembam Ronaldo Singh), and uncovers a larger conspiracy that is entangled with the assassination attempt. His plans to solve the case along with his bright and trustworthy young colleague, Imran Ansari (Ishwak Singh), are constantly thwarted and belittled by his superiors.

And then there are the subplots. Keeping up with these might be a bit of a challenge, but each one that unfolds leaves you wanting more. The difficulties that arise in family life, love, duty, and attachments are exposed in a genuine and authentic light. Hathi Ram’s dynamic with his wife Renu (Gul Panag) and son Siddharth (Bodhisattva Sharma) is dealt with rather interestingly.

If the plot line isn’t your cup of tea, you should watch Paatal Lok for its cast and characters. This is an extremely fascinating bunch. Jaideep Ahlawat doesn’t let down, not even for a second. To those with strong emotional attachments to characters, Ishwak Singh’s portrayal of Imran Ansari is undeniably lovable. But we cannot talk about Paatal Lok without applauding Abhishek Banerjee, who delivers a phenomenal performance as Vishal Tyagi – one of the culprits. It is not very often that a character is written and portrayed well enough to make you feel fear, shock, and sympathy, all at the same time, and in their rawest forms.

The way we see discrimination is, to a large extent, one dimensional. It is a word that takes no physical form for the privileged, or at best, is a vague concept that the law opposes. Because systemic oppression in its true form is a reality too dark and too complex for us to handle. It operates both explicitly and implicitly, and the two are closely related. The line between a crude remark dismissed as a joke and a mob lynching is really a lot blurrier than one might imagine. The creators of Paatal Lok seem to have no qualms with getting their hands dirty and digging deep into the ground reality of how oppression manifests itself. And what they bring to the surface will shake you to the core. Paatal Lok not just exposes the hypocrisy of modern society, but does so in a way that makes you look into yourself for evidence of it. It shakes the very foundations of all that we believe to be true.

Great dialogues, brilliant metaphors, and well shot scenes make for a captivating overall experience. Keep in mind that this is a dark show and deals with some intense topics. If it unnerves you, it’s doing its job right.

The story begins slow. I had my doubts on how it would progress. But once it picked up pace, there wasn’t a single low moment. Although messy at times, the story is gripping and checks all the boxes of a classic thriller. Towards the end, however, the show is cluttered with subplots and ends up a little all over the place. At times, it seems as though they tried to cover a lot more ground than is possible in nine episodes. I would still highly recommend you give it a watch, but do it when you have enough time to binge it. Because if not, then spacing it out might leave you a little confused.

Rarely, if ever, do we see an attempt as bold as this one. Films and TV shows that make us question what we call the norm have definitely seen an increase in the past few years. Paatal Lok creates a league of its own. It brings to the table a nuanced understanding of our most pressing concerns and bares them fearlessly. All in all, it is an absolute win.

A.R. Rahman Criticised The Remake Of Masakali Urging People To Enjoy The OG Song. Can We Please Put A Lockdown On Remixes?