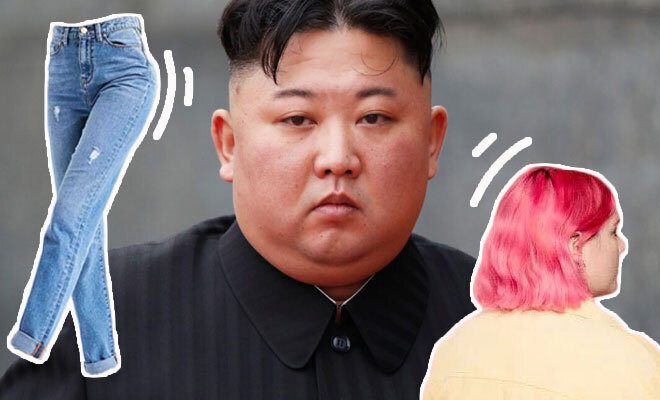 We often hear news from different countries about women being oppressed by repressive measures of a country’s regime. Afghanistan tops the list in this aspect. It’s a country where women do not even enjoy the freedom of leaving their homes without a male family member or get a driver’s licence. You might be surprised to know or maybe not, that North Korea is another such country which apparently believes in promoting conservative ideas. The Kim Jong Un regime is on a mission to monitor and control the type of jeans women wear and the length of their hair. Right, there are some people in our country as well who profess such thoughts, but North Korea is right there, imposing these rules.

North Korea’s The Socialist Patriot League is targeting women of the age group 20-30 for the tightness of their jeans, colour and length of their hair. Such styles are considered foreign and unacceptable by the North Korean government.

As reported by  TimesNow, the government now aims to stop women from wearing skinny jeans, dying hair or promoting any clothes that have foreign letters on them. The source further mentions that an unnamed citizen from North Korea has revealed that the authorities are forcing youth violating this law to stand by the side of the road, till the patrol gets hold of more such violators.

Also Read: YouTuber Reveals 7 Basic Things Women In North Korea Aren’t Allowed To Do, And It Sounds Like A Horrible Life

North Korea is a country which is known to be secretive. Not much about what goes inside the country is known to the world. The country has framed some weird and questionable laws in the past. In December 2021, to commemorate the tenth anniversary of former leader Kim Jong Il’s death, they banned their citizens from drinking, laughing or even shopping. Crazy!