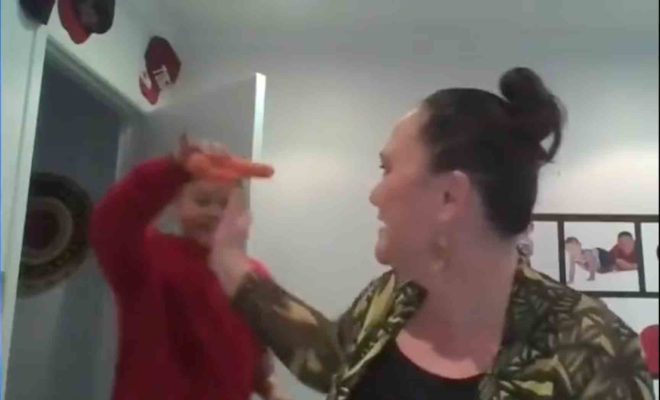 I’m definitely not a kids person. I don’t hate them but I don’t necessarily like them either. Having said that, one thing I’ll definitely agree with us that they are entertaining. They say what’s on their mind without fear and whenever they feel like it. And as adults, we understand that that is not the ideal way to behave, but for kids, they’re still not moulded by society’s notions of right and wrong. That is why they speak their hearts out. Take the most recent example of New Zealand cabinet minister Carmel Sepuloni’s son, who interrupted her TV interview because he found a deformed carrot and wanted to show it to her. But wait, it gets funny!

Carmel Sepuloni, New Zealand’s cabinet minister for social development, was sat for a TV interview, with Radio Samoa’s Breakfast Show With Tavai Meni and was discussing the Covid-19 restrictions. Serious stuff. But then, she was interrupted by her son who came running to her with a deformed carrot waving in his hand. The reason? It looked like male body part! He found it among the groceries and he wanted to show it to her right away. Because children! And then? Well, the mother and son pretty much wrestled over a deformed carrot on camera!

The interview video went viral on social media after the NZ minister shared it on her Twitter account, because even though she was bothered by it at that moment, she found it hilarious in hindsight. I mean, of course! In the video, the host Tavai Meni is heard laughing uncontrollably as Carmel Sepuloni, who is also a Labor Party MP, was trying to remove the deformed carrot in her son’s hand out of the shot.

That moment when you’re doing a LIVE interview via Zoom & your son walks into the room shouting & holding a deformed carrot shaped like a male body part. 🙄🤦🏽‍♀️ Yes, we were almost wrestling over a carrot on camera, and yes, I’m laughing about it now but wasn’t at the time! 🥴 pic.twitter.com/oUbcpt8tSu

Also Read: Video Of Woman Ranting About Returning To Work After A Year Of Work From Home Is Kaafi Relatable!

The interview video has been viewed more than 1.2 lakh times on Twitter and has gotten more than 5000 likes. And the Internet is loving just how innocent kids can be and how hilarious moments can come from their unadulterated joy!

Children, what a delight they can be. 😂

Also Read: Dear Parents, It’s Work From Home, Not Summer Vacation. Why Don’t My Parents Get The Concept?

Hilarious. Joys of working from home.

Work from home is quite stressful, to begin with. And it gets even more difficult when you have a kid(s) in the house. If Ms. Carmel Sepuloni, the cabinet minister of New Zealand, can have such work from home blunders, then we—the general public—can definitely be excused for ours. Having said that, the video on Twitter is definitely amusing, to say the least.

As A Woman, I’ll Always Choose Working From Office Over Work From Home. Here’s Why.