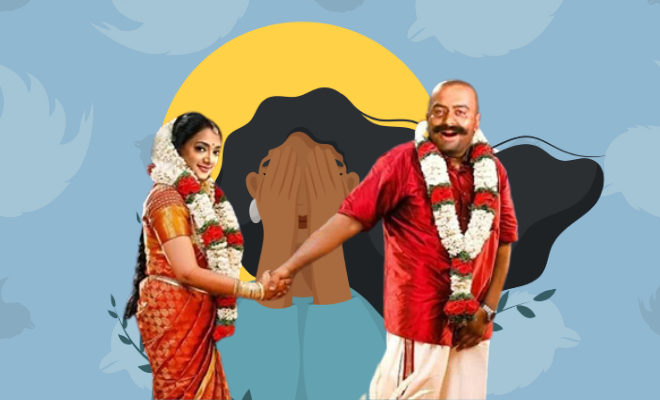 Memes About Vasu Annan Are Making The Rounds. Why Is Rape Humour Funny?

I like to consider myself as a woman with varied tastes and interests. A fact that holds truth both in cases of men and content, but for the sake of this conversation, let’s just stick to content for now. From enjoying different genres to taking interest in distinctive ideologies, I believe that acquiring a taste for something new has never been a problem. That is up until, in the name of creating content people start blurring lines, which I can see would be interesting but then it turned offensive and that’s not cool. And one such popular genre that has emerged in these recent times of creating memes, is that of rape humour. Two words, that even by putting in the same sentence, make as little sense and we really can’t see the humour.

We say this after coming across a rather cringe worthy and disrespectful meme on Twitter, that has been made out of a 2002 Malayalam film Kunjikoonan. The film that is underlined by a villain, Vasu Annan, who  attempts to sexually assault a character named Lakshmi and while trying to escape his clutches, she dies. Now, there is nothing funny about this but for some disturbing reason, this has been made a meme out of on the Internet. Because apparently, the plight of a woman fighting for her life while being violated is laughable.

The troll video was first put up by a YouTuber named Sanal, who runs the popular YouTube channel ‘Sanal editz’. A self proclaimed expert in editing different dialogues, songs and visuals to make a comic masterpiece, his recent work was one that opened a bigger dialogue for all those who took delight in making fun of sexual violence against women. The problem you ask with making a joke or two about such a traumatising act? Is that it is such actions that ultimately contribute in normalising rape culture, and Sanal here, along with all those who hit play on the clip several thousand times, to make it viral, have all been our recent contributors to it. Congratulations.

Not just that, memes that have been making the rounds, imply that the rape wasn’t a violation but actually a show of attraction between the characters. The memes have the criminal and the victim married, sharing a drink, having children. We don’t get the funny in this.

Why take online trolling and memes so seriously, you ask?

Because jokes like these only normalise the violence against women.

You see, when you take something as serious and monstrous as a woman getting raped, to edit it and sell it as something to laugh about, you’re diluting the essence and gravity of the very crime. Which is why, tomorrow when the news headlines with reports of another woman dying of a brutal rape emerge, people don’t feel half asleep enraged as they should, because they’ve conditioned themselves to think this was okay. They’ve brainwashed to consume the news in good humour, all the while the expense of the joke is made on the victim, and never the perpetrator. Pretty telling after we saw a bunch of people dropping “Respect Vasu Annan” memes and comments on the 48 second video. Because, whattey achievement it is to rape and kill a woman.

And that’s where the problem begins from – from glorifying the idea of rape, the concept of a man overpowering a woman, and of the perpetrator being hailed as a “real man” for being able to assert his dominance over the woman through force of power. Be it in roles like that of Kabir Singh, Khal Drogo in Games of Thrones, or even Vasu Annan here, whose memes made mockery of the women getting assaulted, only later to be the mother of his children, it is the fact that we don’t feel there to be anything wrong with it, is what makes it so horribly wrong.

Constructing jokes out of what has been traumatising for the victim, out of the fear, subordination, and the hurt, only further insinuates that the feelings of the victim are ever so expendable, that if there is a good laugh coming, it won’t matter to go ahead and make that joke at the expense of the ones having experienced it.

It’s imperative, we see an end to this growing trend of rape humour like this of Vasu Annan, condemning such memes that are only making fun of the tragedy that life of women has become off late.  There is nothing funny about rape, and the only valid emotion is should invoke in you is that of rage. Nothing else is justified.