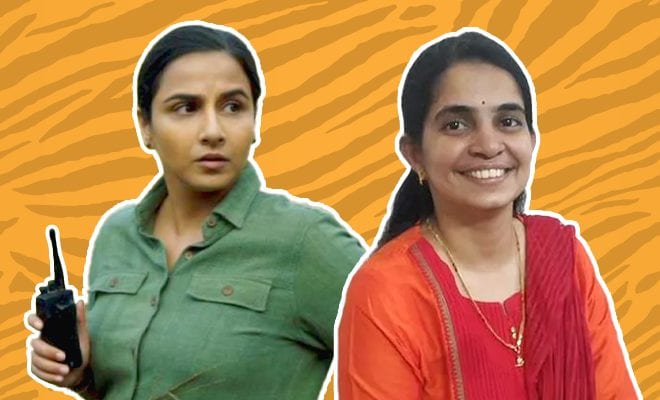 I am not particularly a fan of Bollywood movies. The movie plots, the songs even the characters have gone downhill. But considering I grew up watching these movies, there are a few actors I hold close to my heart. Vidya Balan is one of those. She is strong and unapologetic and all the characters she plays reflect that. Her latest movie, Sherni, just dropped on Amazon Prime today. It’s set in the forests of Madhya Pradesh and Vidya plays the character of a female forest officer who leads the team of trackers and locals to capture a tigress alive. Needless to say, she has done a fabulous job.

Talking about the Indian Forest Service, did you know that it wasn’t until 1980 that women were first inducted into the service? Even today the ratio of men to women is abysmal. But that’s not what we’re here to talk about. It’s just a fact I found interesting. We are going to discuss Vidya Balan’s character and the real-life forest officer that it’s based on.

K M Abharna shattered several gender norms when she joined the Indian Forest Service. She was in charge of the team that rescued tigress Avni, who was shot dead in 2018. Her journey was not a simple one. She took control as the Deputy Conservator of Forest, Pandharkavda division when the locals were extremely agitated with the Forest officials for not being able to handle man-animal conflicts. Abharna eventually managed to get the situation under control by forming all-female teams to be in touch with locals at all times and monitoring camera traps.

Also Read: Sherni Review: Vidya Balan Starrer Isn’t About The Roar, But Silent Resilience. Did It Have To Be This Silent Though?

She created all-women teams to educate people and raise awareness in the tiger-populated areas of Maregaon and the Pandharkawada Range in Maharashtra. Before she took control of the situation in Maharashtra she was in charge of the Central Range of Kaziranga National Park. This National Park houses the largest population of one-horned rhinos. While she was posted here, she ensured zero poachings of the mighty Rhino. She also put an end to illegal fishing networks in the region and made that entire region plastic-free. Currently, Abharna is the director of the Bamboo Research and Training Centre in Maharashtra.

Her exemplary work as a forest officer and all the great feats make her an absolute inspiration. It’s no wonder that Vidya Balan’s character in Sherni is modelled on this amazing woman.

Vidya Balan On Sherni Music Video And Choosing To Do Women Centric Films: I Pick Compelling Stories And Characters That Inspire.