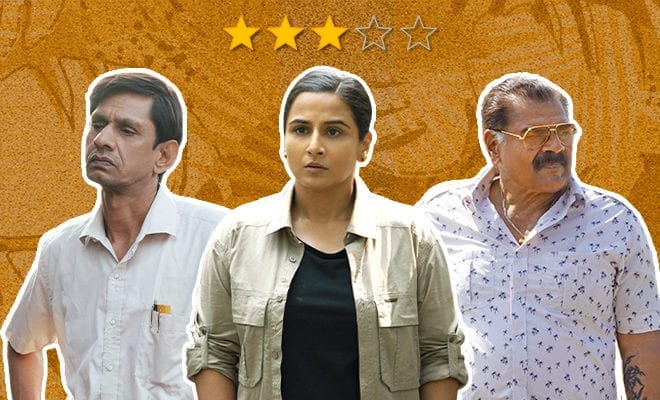 Sherni Review: Vidya Balan Starrer Isn’t About The Roar, But Silent Resilience. Did It Have To Be This Silent Though?

I like realism in cinema like the next film critic. It is something that I expect from the films of certain filmmakers that I know have a way of keeping doing it well, and packing a punch that makes their film more impactful than any over-the-top Bollywood drama. My expectations from Sherni, directed by Amit V. Masurkar (Newton) were similar. It’s a film that is as much about a woman navigating social barriers as it is about the man vs nature conflict. A very real and time-relevant subject that would be apt in the hands of a filmmaker like Masurkar. It stars Vidya Balan as a deputy forest officer incharge of catching a tigress who has gone rogue, alongside talented actors like Sharad Saxena, Neeraj Kabi, Ila Arun, Brijendra Kalra, and Mukul Chaddha. The only way then, for this film, is upwards.

And it does soar, upwards, in this beautiful flight, until that ending comes around. Because then, you, the audience, are the one hanging mid-air, wondering, erm… what just happened? Isn’t there more?

The story and screenplay of Sherni is by Aastha Tiku, with dialogues by Masurkar and Yashasvi Sharma. The cinematography is by Rakesh Haridas, editing by Dipika Kalra, and background score is by Benedict Taylor and Naren Chandavarkar.

Vidya Vincent is a newly appointed Deputy Forest Officer (DFO), a reserved woman of few words. While she is on her posting, her husband and mother-in-law are back in Mumbai. Vidya just wants to do her work diligently, which includes sending show cause notices to contractors, even if they are related to the local MLA. However, her boss would rather turn the department’s public interest events into political campaigning platforms for said MLA than take difficult decisions. The only person who is as honest about his work as her is Mr. Noorani, a zoology professor at the local university who works with their department.

An animal attack alerts the forest department that one of the female tigers under their protection has become a threat to the villagers and their livestock. As per the law, the solution is simple: no killing required, just capture the tigress, named T12, and release her into the nearest national park. But the execution is elusive. See, this sherni is smart! As the tigress progresses from attacking livestock to attacking villagers who wander into the forest despite warnings from Vidya and her team, Vidya slowly discovers that several man-made obstacles obstruct the tigress’ path through the villages and jungles and into the national park. And patriarchy and bureaucratic inefficiency line the path that she, Vidya, wants to take to preserve the balance between man and nature.

With two warring political parties using the issue to further their agenda, a spineless boss, boastful hunters that care more about their own record than saving T12, and the sexist attitude of every other person as they underestimate her, Vidya toils through to do what she wants to do.

Also Read: 5 Thoughts We Had While Watching ‘Sherni’ Trailer: Vidya Balan Roars Per Usual But Why Is Everything Else So Vague?

Vidya Balan puts up a stoic act, and the rest of the cast is equally splendid

If there was one thing I was absolutely certain of, it was that no matter how the film turned out, I would have zero complaints from this heavy duty cast. I use that phrase because gone are the says when star-studded meant that the cast was good. No, ma’am. This right here, a cast with the likes of Vidya Balan, Vijay Raaz, Neeraj Kabi, Brijendra Kalra, Sharad Saxena, Mukul Chaddha and Ila Arun, that’s a cast you can put your money on.

The character of Vidya Vincent is someone you’d find in a lot of Indian households, where the women might not talk much but that doesn’t mean they don’t have agency or power. Making a huge hue and cry about one’s power is the man’s way. A woman’s is the quiet way. Of actions that words. Vidya is a woman of few words. Which makes it really important for the actor playing her to put everything in their expressions and body language. A simple glance, a pause longer than usual. And making every word count. And while due credit to the writers for that restrained and measured character, everything else is masterfully accomplished by Vidya Balan. I felt it right from her introductory scene in her cabin with the mithai she refuses to eat, and felt it only grow, when she managed to convince angered villagers to let her do her job. No raised voices. No show of strength. It’s all in the eyes, chico.

While Vijay Raaz radiated sincerity, and Neeraj Kabi was the epitome of the alpha male, I specifically want to mention two actors who always manage to impress me. The first is Brijendra Kalra, who here plays Vidya’s boss, and a typical senior government officer who cares more about keeping the right powers happy than doing his job. I really don’t know how Kalra manages to play these characters that can be so frustrating to deal with, with such genuineness! The second, is Sharad Saxena, the hunter who thinks too much of himself. He evokes both anger and laughs, which is quite the rare combination. And he manages to handle it so well; this isn’t the first time he’s playing a bad guy who is more funny than menacing, and I just thought, he should know he is so good at what he does.

Mukul Chaddha also handles the annoying but loveable dork pretty well. And Ila Arun is well, Ila Arun, and she balances the cool mom and desi ma acts wonderfully. A huge shoutout to the rest of the supporting cast, who played forest dept officials and the politicians for only adding more strength to the performances.

Sherni isn’t a film about the roar, but about the persistent, silent resilience. And it is perfect in every aspect.

The title of the film, ‘Sherni’, makes it evident that there is a parallel between the stories of the tigress and Vidya. The tigress simply wants to make her journey from one place to another but there are so many hurdles in the way. Vidya too wants to just do her job, but the men around her want to assert their own opinions, knowledge, their greed and even their male pride, and impediment that process. Despite that, they both persist, silently and cautiously in their journey. They win some and lose some, and notice this, the tigress rarely ever roars in the film. Being quiet is how she gets her work done. But her quietness should not be underestimate for her lack of power.

In one particular scene, the male characters all gather for a drinking sesh in the jungle, and in that uninhibited state make animal noises. It’s a powerful visual when you realise the subtext. The main parallel aside, Masurkar and team have masterfully embedded the film with metaphors for humans acting as animals, and how in the battle between man and nature, nature will continue to lose because of man’s greed and pride. But that’s just the battle, folks. We now nature’s fury can be loud and destructive force. But we forget that it knows another way. Quietly, while man is not looking, nature will find a way to heal its wounds, and win the bigger war. We are the dinosaurs here after all.

Sherni’s satirical commentary holds up a mirror to the reality, to the abysmal state of our bureaucracy and governance. But mind you, it is all rather subtle. So you gotta pay attention to who eats the mithai and who doesn’t, who shouts the loudest but says nothing important and how says two words but powerful ones; and who really wins and who really loses in the end.

It is just as impactful as it shows as the issues in Vidya’s personal life. It’s very subtle, because believe it or not, patriarchy isn’t always very overt and blatant. Her husband and MIL, and her own parent are supportive and even proud of her. But there are little things that still need to change for women to finally achieve their full potential.

Also Read: Vidya Balan On Sherni Music Video And Choosing To Do Women Centric Films: I Pick Compelling Stories And Characters That Inspire.

But, umm, did it have to be this silent? To the extent that the female protagonist became dispensable?

Let me put this out there first: I love what Sherni is trying to say, text and subtext. The production is top notch, the filmmaking par excellence, the performances worthy of this film, and the pacing keeps you engrossed and invested in the faith of animals and humans. But the ending just threw me off a little. It felt abrupt, and I realised there was a major failure to communicate in those last few moments. I watched the film with my mother, and she couldn’t believe it was over just like that. She was waiting for the roar, but none came.

Now I know I made the case for silent resilience, but in the end it felt a tad too silent. In fact, if anything, it felt like a compromise, which is what most women have been making for ages now. The ‘empowerment’ angle that the film’s marketing has been riding was nowhere to be found. Naturally, if you drop a music video for a song that says ‘Darr ke aage dahaad, main sherni”, and then don’t give the audience the dahaad they have been waiting for, they’re going to feel cheated and they are going to be pissed.

Also Read: Vidya Balan Didn’t Take Her Husband’s Name And Was Questioned About It. That’s Patriarchy!

The question I asked myself is this: Was there any other acceptable ending to the film? No, not really. Sherni is so realistic, and in the real world, this is the fate that would come to pass. But perhaps it could’ve been depicted better, with a few more details.

In a strange case of mixed messaging, the film is still a parallel between Vidya’s character and the tigress. But the end result is that neither of them are empowered in anyway. So why make a huge hue and cry and peg the film on a woman?

In fact, if you were to replace the female lead with a male lead—an honest, ethical forest officer who wants to do his bit for the environment but is faced with the same issues and politics as Vidya was—the story and the messaging still remains the same! The ‘Sherni’ in the title then would stand for the fate of the tigress, and symbolise how nature and some men’s genuine efforts to save it fall short in front of man’s greed and pride.

Sherni is one of those rare cases where the film is engrossing and invincible, until the end arrives when you least expected it. in the last minute or so when, if you haven’t been paying attention to the metaphors or the lyrics of that one rap song (the only song) in the middle of the film, you will be left wondering what the point of the whole film was. And I have a feeling, that’s going to be most of the audience that came to watch the Sherni roar.

I still want to tip my hat to Amit V. Masurkar and team for this strange gem that I will keep thinking and making my mind up about!

Vidya Balan Says Society Tends To Finds Flaws In Women So That They Do Not Fly High. She’s So Right!