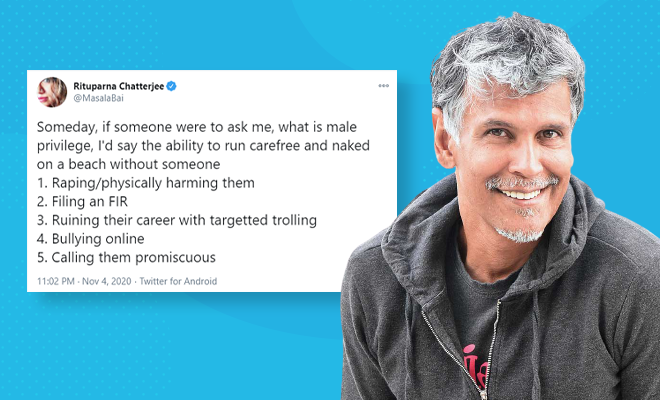 Male Privilege Is Being Able To Run Naked On A Beach Like Milind Soman. This Needs To Be Talked About More

Here’s the thing about male privilege, we have been living with it for so long it doesn’t even strike us as something that’s messed up anymore. But that doesn’t mean it isn’t. Haven’t you ever wondered how men can nonchalantly walk down the street in the middle of the night, shirtless if they’d like, and not one person will even look in their direction? If I were to do that it would not go down so well. There would either be an FIR lodged against me for public indecency or I would be lodging a complaint against someone else for well, trying to take advantage. This is just one measly example of “male privilege”. It’s just another fabulous bi-product of *drumroll please* our patriarchal society. And it’s also precisely what Rituparna Chatterjee has correctly talked about in one of her latest tweets.

Before I tell you exactly what she said, let me ask you something. A few days ago was Milind Soman’s 55th birthday and to commemorate it, he shared a picture of himself running stark naked on a beach. If you haven’t seen the post yet, you’re really missing out but that is not my point today. How many of you’ll think that the picture he shared is a classic example of male privilege? I do and so does Rituparna Chatterjee who goes by the handle Masala Bai on Twitter. Just think about it. How would people react if a woman had posted a picture of herself running naked on a beach? People would brutally troll her, send her rape and murder threats, slut-shame her and assassinate her character. It would somehow become a religious, political and cultural (unhealthy) debate. Basically, it would stir up an entire social media shit storm where ignorant people would drop tone-deaf comments about the woman. And that right there is why owning a penis in this country is considered a privilege. You can run on the beach in your birthday suit without consequences that will leave you scarred.

Someday, if someone were to ask me, what is male privilege, I'd say the ability to run carefree and naked on a beach without someone
1. Raping/physically harming them
2. Filing an FIR
3. Ruining their career with targetted trolling
4. Bullying online
5. Calling them promiscuous

In her tweet, Rituparna Chatterjee talks about the aspects of male privilege and connects them to Milind Soman’s picture. There is a sassy undertone to her tweet that I really enjoyed. Her tweet read, “Someday if someone were to ask me, what is male privilege, I’d say the ability to run carefree and naked on a beach without someone 1. Raping/physically harming them 2. Filing an FIR 3. Ruining their career with targetted trolling 4. Bullying online 5. Calling them promiscuous.”

It’s not confined to just this picture or celebrities. If you pay close attention, you will be able to find examples of male privilege in your everyday life. Haven’t you ever wondered why your male co-worker is taken more seriously than you are, even though you have better ideas? Or how you can’t go anywhere without that gnawing feeling you are in danger while your male friends have no such worries? It all boils down to male privilege. And frankly, I am sick of men having undue advantages, aren’t you?

Also Read: Milind Soman Posted A Picture Of Himself Running Nude On A Beach. He Is Being Appreciated, While Women Get Trolled

Another great example comes from Poonam Pandey’s recent arrest. You see, she and husband were arrested in Goa for shooting an obscene video on government property without proper authorization. Now, we don’t know the contents of this video but all we do know is that it went viral on social media after which a case was lodged against Poonam Pandey.

Now, think about this. If Milind Soman wasn’t called out for running naked on a beach, why was Poonam arrested for making a video? Since when is running naked in public, not obscene? Milind was appreciated and applauded and Poonam was called promiscuous and abused. These are double-standards and Milind, being a man has the upper hand. What I understand from this is that women don’t have the luxury of being carefree and walking on the wild side while men can do whatever they please. If this is not male privilege, then I don’t know what is.

Our goal is and always has been gender equality. How are we supposed to achieve that if women are called out and threatened for all the things that men easily get away with? Male privilege needs to be called out and overthrown. We have been the losing underdogs for too long. Not anymore.