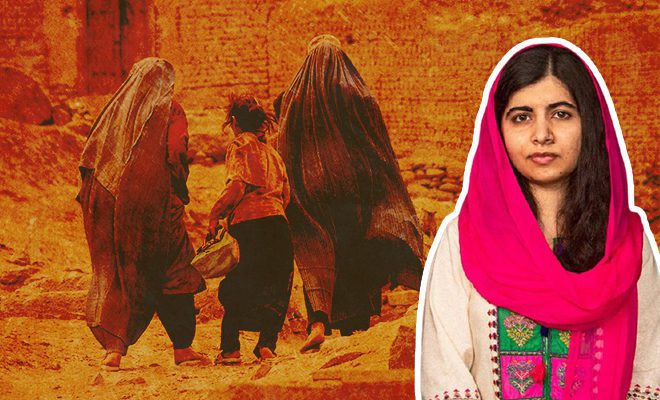 Ever since the Taliban rose to power in Afghanistan in August 2021, they’ve been imposing rules and laws that are downright sexist. There is no denying that these laws and rules are directly violating human rights – especially women. Adding to the list of the sexist laws, the Taliban recently issued a decree that directed Afghan women to wear chadori – a head-to-toe burqa. As soon as the decree was passed, the Nobel Prize winner Malala Yousafzai went on to Twitter to urge all world leaders to hold the Taliban accountable for violating women’s human rights.

On Monday, May 9, Malala Yousafzai took to her Twitter to berate the new decree that the Taliban passed which states that all women have to cover up and wear a chadori as it is “traditional” and “respectful”. In her tweet, she claims that the Taliban want to erase Afghan women and girls from public life.

In her tweet, Mala Yousafzai wrote, “The Taliban want to erase girls and women from all public life in Afghanistan – to keep girls out of school and women out of work, to deny them the ability to travel without a male family member, and to force them to cover their faces and bodies completely.”

Malala Yousafzai went on to say they need to pay more attention to the condition of Afghan women as the Taliban are constantly breaking their promises. She then goes on to urge everyone, especially those belonging to Muslim countries, to stand in solidarity with the Afghan women who are fighting for their human rights and their dignity.

Also Read: Malala Yousafzai Trolled On Twitter For Getting Married, She Issues Clarification

Malala Yousafzai concludes her tweet by addressing the world leaders and asking them to take a collective action to hold the Taliban accountable for their actions – which include violating the basic human rights of millions of Afghan women.

After Withholding Driving Licenses, The Taliban Decrees Afghan Women To Cover Their Faces When Stepping Out