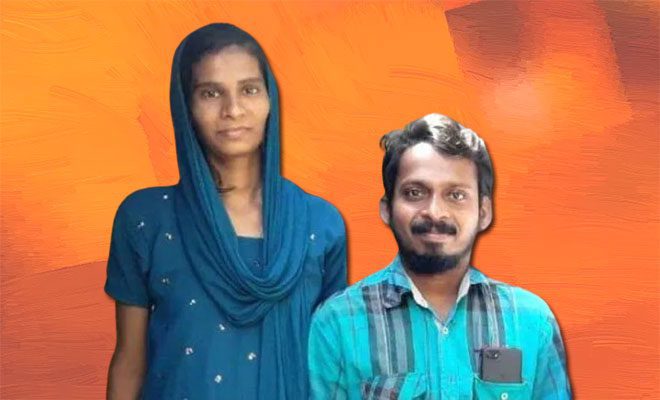 Love marriages are way more fun than arranged marriages. That is because every love marriage has its own story: parents are against it, long-distance, they’ve been together since childhood, etc. But the most recent love marriage tops them all. Here, a man from Kerala marries his girlfriend (nothing shocking, right? Wait for it) that he hid in his room for 11 years. Wait, it gets better. All this while, his family had no clue that she was living with him. Tops it all, doesn’t it?

Rahman from Palakkad, Kerala had hidden his girlfriend Sajitha in his house for 11 years without his family knowing. And on Wednesday, he legally married her. Also Read: This Kerala Couple Got Married In A Government Hospital Because Where The Groom Was Covid Positive

Sajitha had left her home at the age of 18 and had consensually agreed to live in Rahman’s house in Palakkad, Kerala.

“One day she told me she can’t stay at her home anymore. I had no other option, so I asked her to come with me. I was expecting some money, so I thought I would go with her and live somewhere else. But the money got delayed, and when I got it, my family took it away. So, we were stuck,” said Rahman while talking to the media.

According to news reports, the Rahman’s entire family had no clue that Sajitha was living with them under one roof for 11 years, because he had forbidden anyone from entering his room, and put a special set of locks on the door as well. As for Sajitha’s parents, they had absolutely no idea that their daughter was living this close by. They had reported her missing, and the cops had even questioned Rahman. However, when there was no clue about her whereabouts, Sajitha’s parents gave up on finding her.

Rahman and Sajitha had eventually moved out of his home and into a rented place in a nearby town. When Rahman’s family realised he was missing, they filed a missing person complaint for him as well. However, on June 8, Rahman was spotted on a bike by his brother in the Nenmara town, and that’s when this entire story was revealed by them.

Sajitha’s parents were present when Rahman and Sajitha got married under the Special Marriage Act at the Sub-Registrar’s office in Nenmara, in Palakkad district of Kerala.

Also Read: In Kerala, A Woman Set Up A Fashion Store For Brides-To-Be Who Can’t Afford Outfits And Accessories For Their Wedding. How Amazing Is This?

It really blows my mind that no one realized that there was a girl living in that house for 11 years! Could you imagine staying in hiding for so long? Well, love makes you do crazy things!

In Haryana, ‘Marriage Shops’ Help Couples Whose Families Are Against Their Wedding