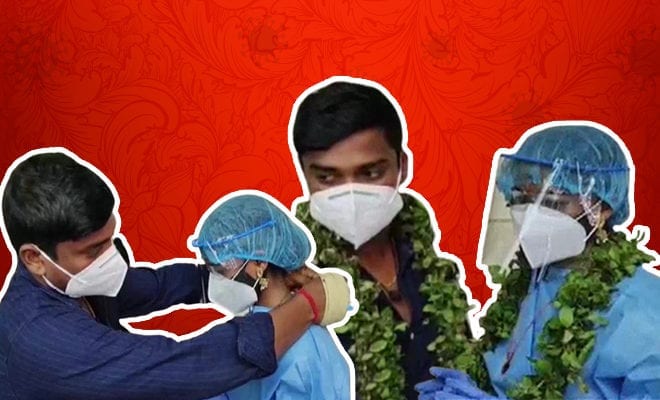 Up until recently, the only ‘different’ kind of weddings I had attended or been in the know of were lockdown weddings where other than the surprisingly low number of people attending the event, the bizarre part was everyone having to wear a mask and carry a sanitiser along with their sagan ka lifafas. However, as we have descended into the chaos that is 2021 and towards the very virulent second wave of Coronovirus, things and weddings are taking a turn. Like this wedding, that was hosted at inside a government hospital!

This one of a kind wedding took place in a government hospital in Kerala. This story is about Abhirami, the bride who wore a PPE kit to get married to Sarathmon S, after he got admitted into the hospital after testing positive for covid.

Keeping in mind how the situation of the pandemic is only worsening with every passing day, this couple from Alappuzha decided to no longer wait to get married and finally tie the knot. But with all the precautions in place.

Kerala: A couple tied knots at Alappuzha medical college and hospital today, with the bride wearing a PPE kit as the bridegroom is #COVID19 positive. The wedding took place at the hospital with the permission of the District Collector. pic.twitter.com/2IdsRDvcHZ

Also Read : This Newly-Wed Indian Couple Used Their Wedding Fund To Donate 50 Beds And Oxygen Cylinders To A COVID Centre. What A Lovely Gesture

The small wedding that was officiated in the ward of a government hospital was also attended by the groom’s mother, who was also tested positive and admitted into the same Alappuzha Vandanam medical college along with her son. The wedding was performed by one of bride’s relative, was ultimately completed after the groom tied ‘thali’, the mangal sutra and garlanded her with a tulsi garland to commemorate the occasion.

And while unusual, this wedding only went through after the couple had received the necessary permission from the authorities. The wedding that although was fixed a year ago, got delayed because the groom worked in the Gulf region. At first, his mother developed breathing complications and soon after both son and mother tested positive.

But, this did not let them deter from the course of their wedding. After seeking permission from the district collector and hospital authorities, the bride wore a PPE kit and was accompanied by only one of her relative’s to go inside the hospital and get married.

Also Read : Woman Wears Her Wedding Gown To Get The Corona Vaccine Because She Wasn’t Able To Have The Wedding She Wanted