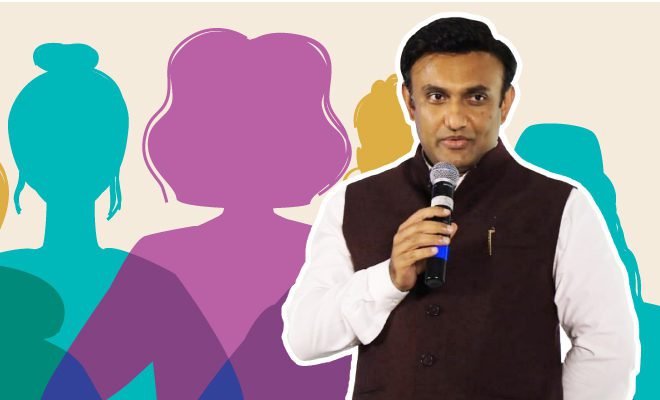 If you have ever watched the news or are up-to-date with the politics that run in our country, you would know the amount of bizarre and random things politicians have said, especially about Indian women. I mean, we all heard what the Karnataka Health Minister, Dr. K Sudhakar said on Sunday. Well, if you don’t know, let me be the one to bring it to you. On Sunday, Dr. K Sudhakar had a few bizarre remarks to make on the “modern Indian women.” He said that modern women of India prefer to stay single, are unwilling to give birth to a child even after marriage, and want children by surrogacy. Bizarre, right? I’m an Indian woman who’d like to think she is modern and let me tell you, I don’t prefer any of those things. And even if I did, would it be so bad? My body, my choice, right? Well, no wonder his ridiculous remarks sparked a controversy, and now he has issued a clarification. Typical.

On Monday, Dr. K Sudhakar, the Karnataka Health Minister, issued a clarification on the remarks he made on the “modern Indian women.” In his statement, he stated that his remarks were based on a survey and a small part of his speech was taken out of context and he wants everyone to watch the complete video before jumping to conclusions.

As per ANI, Dr. K Sudhakar further stated that India is a collectivist country, unlike the western countries that focus on individualism. He further put emphasis on the fact that in India we give more importance to interdependence and cooperation with our families which forms the basis of our social structure. The Minister also added that the solutions regarding mental health can be found in the traditional family and also in the value system of a family.

Also Read: In Kerala, Minister Ask That Sexual Harassment Complaint Be Resolved On The Phone

Is it just me or does the clarification that he gave on his remarks do nothing to salvage the situation? The problem exists in the mindset that if women choose to remain single or not have children, then that is “not good”. As a Health Minister , if this is his thinking and point of view, I really doubt if he’s ever going to understand the issues faced by “modern Indian women.” Honestly, this is a patriarchal way of thinking, if a woman wants to stay single, have a child or not, want a child through surrogacy or not, is her personal choice. It has nothing to do with being “modern” nor is she “influenced by the west.”

Why Does Our Culture Make It So Uncomfortable For Us Indian Women To Have Casual Sex?