Karnataka CM Announces Schools, Colleges Will Be Shut On Account Of Hijab Row. Is This How We’ll Do Beti Padhao Beti Bachao? 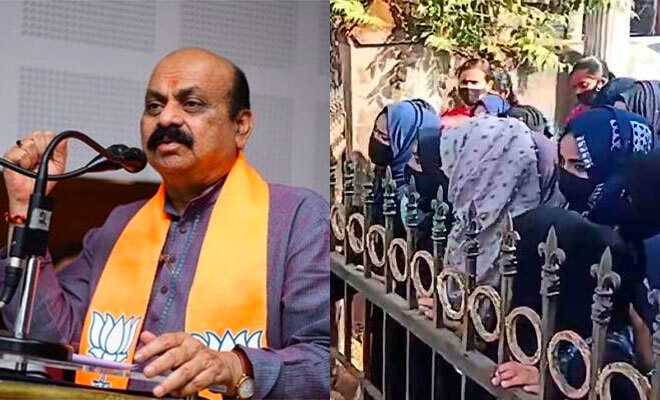 While the bias between religions has always been a matter of concern in India, I believe tensions between Hindus and Muslims have never been higher. And the divide between the two communities keeps getting larger with rules being made by the state which clearly disrespect one or the other. One major example of this is the ongoing controversy in terms of the hijab row in Karnataka. Amidst student protests, now there has been a new development in the matter by CM Basavaraj Bommai.

“I appeal to all the students, teachers and management of schools and colleges as well as people of Karnataka to maintain peace and harmony. I have ordered closure of all high schools and colleges for next three days. All concerned are requested to cooperate,” said CM Bommai according to sources.

Also Read: “Are Hindus The Only Betis Of India?”, Muslim Students On Karnataka Hijab Row Amid Ongoing High Court Hearing

Tensions in Karnataka institutes in regions of Shivamogga, Bagalkote, Udupi, etc have reached an all-time high with educational institutions pushing the police and other authorities to get involved. Meanwhile, the Karnataka high court is in the middle of listening to the petition filed by 5 girls who have questioned the hijab restrictions and study in a Government Pre-university College in Udupi. The petitions will continue to be heard tomorrow from 2:30 PM on February 9, 2022, according to reports.

While so many students have suffered an enormous amount of loss in terms of their time and education, this hijab row seems to be so ill-timed and inconsiderate of the students’ education. Moreover, in a country that claims to be secular in nature, how is it fair to ban an entire community? I am really hoping that the authorities in Karnataka lift this ban and this entire situation settle down soon.

In Iran, This Woman Was Arrested For Cycling Without Wearing A Hijab. How Is This A Crime?