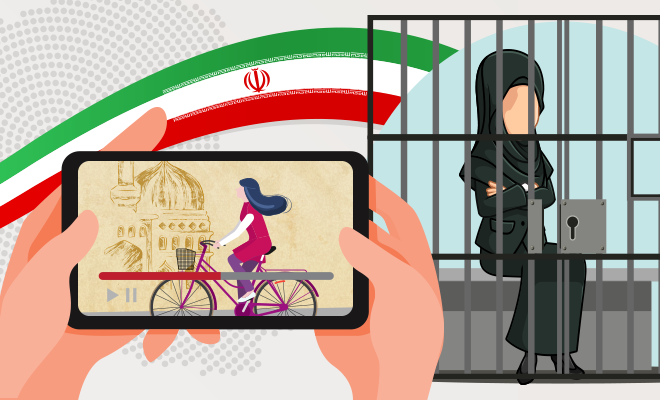 In Iran, This Woman Was Arrested For Cycling Without Wearing A Hijab. How Is This A Crime?

Iran wasn’t always like this but right now, when it comes to women’s rights, it’s absolutely at the bottom of the list. That much is not a secret. I am not saying that India has achieved gender equality (we are not even close!) but at least here we can wear what we want, dance to the tunes we want and don’t have to chaperoned around by a male guardian. In Iran, women are deprived of basic rights and even the slightest rule-breaking will land them straight behind bars. This needless oppression is infuriating but that’s how it works. In fact, it’s what happened with this woman who was cycling without wearing a hijab. Because how dare she do what she wants to?

When I woke up this morning and read this piece of news, my blood was boiling. Can you imagine living in a country where even cycling bareheaded can land you behind bars? It’s terrifying and sickening at the same time. But that what life in Iran is for these women. It’s like they are trying to push women who do anything by their will down. Are the men so threatened that a woman simply riding a cycle is enough to scare them?

This young woman was arrested in Central Iran after a short video of her cycling, without a veil, was circulated on social media. They said her crime was that she “insulted the Islamic hijab”.  According to reports, in the video, the long-haired woman whose face was extremely pixelated appeared to raise her right hand from time-to-time as she rode her cycle. This is not a good enough reason to arrest someone.

Also Read: Iranian Artists Are Being Thrown In Jail For Going Against Government Regulations Against Women Singing And Dancing. What Kind Of Nonsensical Oppression Is This?

The IRNA news agency said that the video of the woman riding her cycle without a hijab in the main square and in front of a big mosque provoked protests from residents and clerics living in the city of Najafabad, Iran. Mojataba Raei, governor of Najafabad, told IRNA news that “A person who had recently violated norms and insulted the Islamic veil in this region has been arrested. Her motive for committing this action is being investigated. The residents of this city are holding a protest rally today (after) the unprecedented violation of norms”.

Yep, this woman riding her cycle without a hijab ignited protests in a city. This is systematic oppression that no woman should have to endure. If she wants to ride her cycle bare-headed, she should be able to without starting protests and getting thrown in jail. This is where the importance of feminism comes in. No one expects countries like Iran, that have a history of being unfriendly towards women, to change their laws and ways overnight. But there has to be some inclusivity, freedom and empowerment.

An #Iranian woman has been arrested for 'cycling without hijab’ but she is not a criminal!

🇮🇷 In #Iran, women are forced to wear a hijab that conceals their hair. #ForcedHijab pic.twitter.com/Z04TlMlXh2

The thing is, under Islamic law that is in force in Iran since its 1979 revolution, women must wear a hijab that covers the head and neck and that conceals their hair. But a lot of women have now started pushing back and wearing their hijabs in a way that reveals more of their hair. This happens commonly in Tehran and the other major cities of Iran. But clearly, a woman not wearing a hijab at all has some serious repercussions. Iran is a country where even the most basic rights are denied to women.

Cycling is not a crime, with or without a hijab and this is shameful.

In A Shocking Case Of Honour Killing, A Man In Iran Beheaded His Daughter. He Did This After He Consulted A Lawyer About The Punishment.