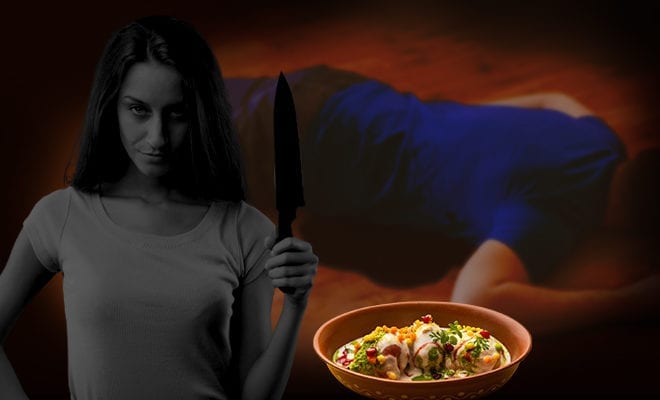 When I tell anyone that I am a feminist, they always confuse it with misandry. These two terms aren’t synonymous. If anything, they’re antonyms. Feminism means that as much as we want to rid this world of sexism and misogyny, we do not hate men. We simply want equality. This means that in our quest to end violence against women if we come across a woman who is guilty of a crime, we won’t hesitate to call her out. Like this woman from Jaipur who stabbed her brother-in-law over a plate of dahi bhalle.

On Wednesday, in the Panda Mandi area of Jaipur, a woman, identified as Fariya, stabbed her brother-in-law, Moseen, after a domestic dispute with her sister-in-law. Fariya lives with her husband, Shahrukh, and his three brothers. She has a contentious relationship with her brother-in-law, Moseen, and his wife due to non-payment of rent. Hence, after an altercation over a plate of dahi bhalle, Fariya stabbed Moseen with a knife. He succumbed to his injuries after which the police were informed. A petty fight that into a blood bath.

It all started on 9 May, when Fariya’s husband, Shahrukh, asked her to give a plate of dahi bhalle to Moseen. However, according to reports, Moseen refused to take the plate after which Fariya returned to her room. A while later, Shahrukh asked her to go to Moseen’s room again and return a bowl. This angered Fariya. She emptied the contents and went and threw the utensil on the floor of Moseen’s room. A heated argument ensued between the Fariya and Moseen’s wife. The fight escalated and it soon became physical. They started hitting each other. When Moseen tried to stop them, Fariya picked up a knife and stabbed him in the stomach.

#Jaipur: The woman, identified as Fariya, was arrested on Tuesday in connection with the killing of her brother-in-law Mohseen, police said.#Crime https://t.co/Zlvk3WSw09

Moseen was rushed to the hospital. The family lied about his wounds and claimed that a rod pierced through him after he fell from the terrace. However, when Moseen succumbed to his injuries, the family revealed the truth to the police during an interrogation. Fariya was arrested and an investigation is underway.

I understand how difficult it can be to avoid domestic disputes, especially during this lockdown period. Our mental health is in shambles and everyone is always on edge. But we have to be very careful and find healthier ways to express ourselves. What Fariya did is inexcusable and hopefully, she is held accountable for her crime.

In Kuwait, A Woman Was Brutally Murdered By A Man Who Was Harassing Her. This Led To Protests By Women Demanding Women’s Safety