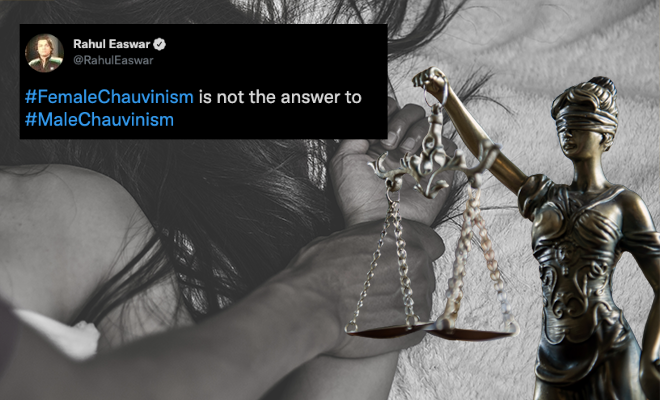 Today’s top Twitter trend is #MaritalRape and the reason is an ongoing hearing in Delhi High Court with regards to it. The Court is currently hearing a batch of petitions filed by NGOs RIT Foundation and All India Democratic Women’s Association seeking to criminalise marital rape by sticking down the exception given to husbands under section 375 of the Indian Penal Code. In the current case, the bench of Justices Rajiv Shakdher and C Hari Shankar have raised several questions asking why married women are treated differently as compared to unmarried women. The bench has also asked some truly tough questions regarding the institution of marriage, marital laws, personal laws, criminal laws, rape laws, constitutional rights as well as the brutality of non-consensual sex and marital rape.

But the one thing that actually got people talking about marital rape on social media is the fact that the Amicus Curiae in the case, Senior Advocate Rajshekhar Rao has spoken up in favour of striking down this exception that provides protection to husbands from rape charges. In fact, the senior advocate has pointed out that rape dehumanises the very existence of women. He also shared that no matter how many legal remedies a woman may have to prosecute her husband in case of marital rape, it cannot undo the pain of not being able to call it rape. He also stressed the fact that being violated by a man, her husband, who is supposed to protect her and be her companion can be really painful and violative of a woman’s right to dignity.

Ever since then, Twitter has been blowing up with outrage from people who have been showing concern over the fact that criminalising marital rape will open up men to false allegations of rape charges. And mind you, we did not hear a peep from these very people when women across the country were being repeatedly raped by their husbands and were forced to continue living under the same roof with their abusers and even serve them food the next morning. I am not going to disagree with the fact that false allegations are far too common but that does not mean that we will stop making the right laws for women and their safety. This does not mean that married women should be treated differently and their right to sexual and bodily autonomy be violated under the garb of marriage.

Take a look at these rather outrageous tweets.

It is time for every MAN to wake up and fight against the institutional and structural injustice that will be on him if #MaritalRape argument goes thru.

It will open up a Pandora's box of false allegations and will be an extortion tool for women's lawyers.. #MenToo pic.twitter.com/Exyr9Jp6pW

50+ women protection laws are already in place still feminists want one more draconian law #MaritalRape.
Instead of destroying the institution of marriage in India government should ban marriages.#MaritalRapeLawIsAntiMen #NoLaw4Husband pic.twitter.com/JAFPBcb6VM

#MaritalRape law is indirect-criminalization of marriage by creating chilling effect in the minds of one half of the marriage of being falsely accused in a r*pe crime.
He will lose job & honour.His family will be hounded by society.
All this for what?
For west's pat on your back!

Pardon me, but if you’re so scared of the law criminalising marital rape maybe you should try asking for CONSENT or just don’t get married. Works perfectly fine for us women!

#MaritalRape : Do u know why Women Activist are now so desperate to term their Husband a #Rapist?
Extortion of Money & Property of Husband Family, nothing else.
Earlier they do with #IPC498A-Now difficult as Men #FightBack.
Then in 2012 tried via IRBM-Men #FightBack & Stop it. pic.twitter.com/2FN1HOrQuQ

Make no mistake " #MaritalRape argument" By the Ultra Feminists will be the 'Ultimate Tool' for harassment against your Son, Brother, Male Friend and every man

It is a dangerous slipper slope.. There is already provision for women to file cases if such a thing happens. pic.twitter.com/IJhprZ3tTM

Karuna Nundy compares sexual expectation a husband has from his wife to that a man has from a sex worker. Quite clear what feminists think of this sacred institution called Marriage. Such low. What a shame @karunanundy #MaritalRape

Well, Deepika…I don’t hear you talking about how it’s such a shame that husbands have the rights to violate their wives trust, rights and body in this very sacred institution called marriage. ​

If #MaritalRape law comes & people still get their sons married, they would officially be signing off their wealth to other party indirectly & opening doors of jails for their sons

Sure it would be few thousands outta population of crores but how would u ensure u aren't one?

I stay in a country where Husband will be prosecuted for having SEX with her Wife….

Only suckers will get married if marital rape gets included in IPC.

If wives control their micro aggression brainwashed by feminist narratives and listen to their husband saying ‘No means No’, they wouldn’t ask for another law to falsely accuse men for their assertiveness. pic.twitter.com/u30Sr6yFCY

And what really shocks me is the fact that some of these people have the audacity to come up with a #MenToo campaign and put it up right next to the #MeToo campaign that was meant for sexual assault victims (of all genders) to open up about their pain and raise their voice against the abusers. Like really? I never heard any of these people talking about their male privileges as long as patriarchy and sexist norms favoured them but the second we have a hope of any law that favours women, these very people want to talk about false allegations?

It is so convenient to blame the victim and shame them when they are sexually assaulted or raped but when it comes to false allegations against men, I don’t hear anyone asking men to be careful and stay away from women if they don’t want to be accused of things they did not do. By no means am I in favour of victim shaming but I am just not okay with #MenToo because it’s just so wrong. These conservative people hate feminism for giving women a voice but they have no problems with it as long as it benefits them.

Thankfully there were several people who supported the move and spoke in favour of criminalising marital rape and I cannot even begin to explain how much we need this law. This was long overdue and we’re really glad that things are looking up for married women.

A rape is a rape and a "rapist remains a rapist" and no amount of classification and no amount of verbal jugglery can alter that reality: Amicus Rajshekhar Rao before Delhi HC in #MaritalRape matter.

Some men crying because there is an ongoing discussion about #MaritalRape being legally punishable as rape. Any man defending it or pretending it is going to be misused is shameless. Criminalization of marital rape is long overdue.

The amount of people that are against this provision don't really understand the concept of consent. Every woman has the right to say NO, what is so hard to understand? The worst part is you can see so many women who are against it and making fun of it. Shame on you#MaritalRape

This argument is beyond dumb. Rape is rape, married or otherwise, if there was no consent, it is rape. Period.

Marriage is a legally binding contract to co-ownership of rights, property and caregiving.

Marriage is not an eternal consent for sex. pic.twitter.com/woEMYvvQUH

I am not going to say that I do not see the other side of the coin and the problematic things in criminalising marital rape because I do. We definitely need a better way to criminalise it and ensure that men do not suffer because of these laws. I must add that criminalisation of marital rape will require the authorities to put it under a separate offence and have a separate section in the Indian Penal Code to ensure that it protects men from false charges. Feminism is not about making men suffer, it’s just about ending the suffering and oppression of women and bringing them at par with men in terms of equal rights and opportunities. Also, we just want to create a safe space for women to live with dignity.