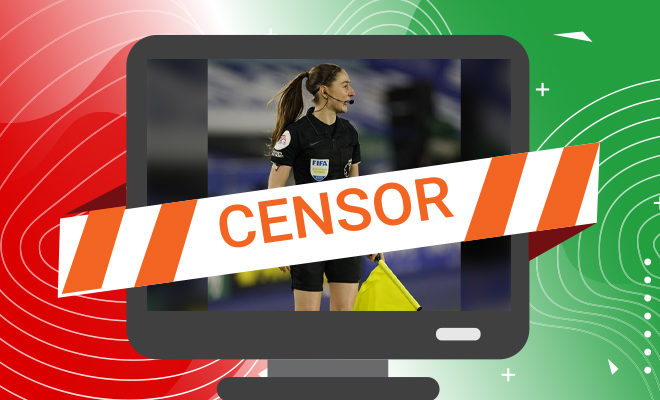 In Iran, A TV Channel Censored A Football Match To Avoid Showing The Legs Of The Female Referee.

There’s no denying that when it comes to gender equality, India has a long, long way to go. At the moment, we are taking one step forward and ten steps back. And that is largely due to our overtly sexist politicians. Their misogyny knows no bounds. However, keeping all that in mind, I would still say that when it comes to the status of women, India is much better off than a lot of other countries. Take Iran for instance. It’s one of the worst ranking countries for women. They are repressed under the patriarchal regime. It’s mandatory for them to wear a hijab and baggy clothes. Married women can’t go anywhere without the permission of their husbands. In fact, numerous Iranian women have been sent to jail for publicly speaking out in favour of equal rights for women. It’s a nightmarish life.

After learning all this, it shouldn’t come as a surprise that the Iranian government keeps a vigilant eye on the kind of content their masses are consuming through television and movies. Recently though, they crossed all limits. During a football match, Iran’s state TV was forced to abruptly cut away over a hundred times to avoid showing the bare legs of a female assistant referee. What did they think would happen if people watching the match would see a woman’s bare legs? The men watching would get horny? Or the women watching would know that there is a life outside a hijab? Censorship I understand. This is nothing more than sexist propaganda.

During a Premier League broadcast of Tottenham vs Manchester United, the Islamic Republic state broadcaster showed the Iranian viewers a landscape shot of the Tottenham Hotspur Stadium and the backstreets of Enfield to conceal shots of the assistant referee, Sian Massey-Ellis’ bare legs. According to reports, Massey-Ellis was concealed constantly because she was wearing shorts. That went against Iran’s strict religious laws.

Iranian state TV channel cut away from live coverage of Tottenham versus Manchester United more than A HUNDRED times 'to avoid showing the bare legs of the female assistant referee'.#PL #seanknows pic.twitter.com/L0MN8mRLAk

Also Read: This Iranian Woman Was Executed By Hanging After She Had Already Died Of A Heart Attack. This Is Excessively Harsh.

Talking about this, My Stealthy Freedom, a feminist group that campaigns against discriminatory laws in Iran wrote, “The television censors were rattled by the presence of a female referee in shorts. Their solution was to cut away from the action to views of London’s backstreets, which made a mockery of the game. At the end of the game, one of the commentators joked that he hoped the viewers enjoyed the geographic show. Censorship is in the DNA of the Islamic Republic of Iran. We should not normalise this practice. This is not our culture. This is the ideology of a repressive regime.”

Being a woman in Iran sounds horrid. I’d say that they need to try and close the gender gap and implement laws that will give women some freedom but it all seems highly improbable. If they can censor a football match over a hundred times to avoid showing a woman’s legs, they obviously aren’t going to work towards empowering women. This isn’t even the first time that an Iranian state television channel has censored a football match they deemed unfit to be viewed by the public.

"An Iranian state channel cut away from the game and played footage of the Tottenham Hotspur Stadium and the backstreets of North London in an effort to conceal shots of assistant referee Sian Massey-Ellis" https://t.co/qkDZb3xtBz

In 2018, during coverage of the Champions League quarter-final with Barcelona, the state television channel abruptly blurred a portion of the Roman team’s badge. They censored the Italian team’s crest during the studio intervals. You see, the badge portrayed a female wolf having its teats suckled on by Rome’s mythical twin founders Romulus and Remus against a red and yellow background. The Iranian state television blurred out the wolf’s nipples. Isn’t this so disgusting? Now they have a problem with female wolves as well? Are females of any species safe from this inane sexism?

Here’s another fun fact about Iran’s policies to oppress women. Did you know that it was only in 2019 that women were finally allowed to even enter football stadiums to watch a match live? It’s true. Iran had banned women from watching football and other sporting matches for around 40 years. This changed when FIFA threatened to suspend the Islamic republic over its controversial gender norms. For their 2022 World Cup qualifier against Cambodia in October 2019, Iran allocated merely 4,000 tickets for women in a stadium that can hold up to 80,000 people. They were kept separate from the men in the stadium by female police officers.

This is just so disgusting and problematic.