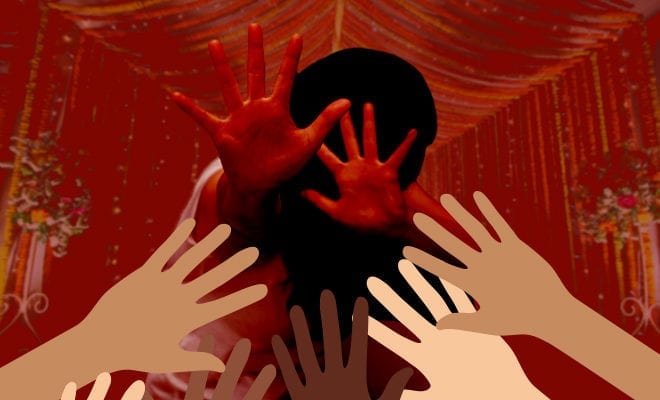 In Agra, A Group Of Men Gang Raped A Woman While She Was Catering A Wedding

After writing dozens of articles about women getting raped and abused, it’s become crystal clear to me that no matter where women go or what we do, we are never a hundred per cent safe. And despite what all the misogynistic politicians say, it’s never about the length of our skirt or the time at which we are travelling. It’s about the fact that the men in our country have never learned the meaning of the word consent. Nor do they know how to accept and to handle rejection in a healthy way or how to keep it in their pants. Recently, a woman in Agra was gang raped while she was catering food for a wedding. How many women have to silently suffer through this nightmare before some serious preventive action is taken?

On Sunday night, a woman in her early thirties was catering a wedding in Agra. There she was allegedly raped by a confectioner and his friends. A case was lodged with the Agra police by the victim’s husband. According to reports, one of the accused has been detained. Why aren’t these gruesome cases getting the media attention they deserve? Rapes are becoming a second national emergency. One that needs desperate attention.

#UttarPradesh| A cook in Agra was gangraped by a confectioner and his friends, officials said on Monday adding that one of the accused has been detained.@agrapolice#Crime #Agra https://t.co/tUtNwXUFEF

Also Read: In Gurugram, Five Men Abducted And Gang Raped A Woman Coming Back From Her Late Night Shift

After the monstrous sexual assault, the woman was left unconscious. As soon as she gained consciousness, the woman was rushed nearby police post. Superintendent of Police, West, Agra Rural, Satyajeet Gupta told PTI, “She was sent for medical examination. She has been admitted at a government hospital for treatment.”

We don’t have all the details as of yet as the investigation is still ongoing. I hope that the Agra police catch all the accused and they spend the rest of their lives behind bars. It really boils my blood that cases like this one go unnoticed. The only way we can put a stop to rapes and gang rapes is if we spread enough awareness to change the prevailing mentality of the people in our country.