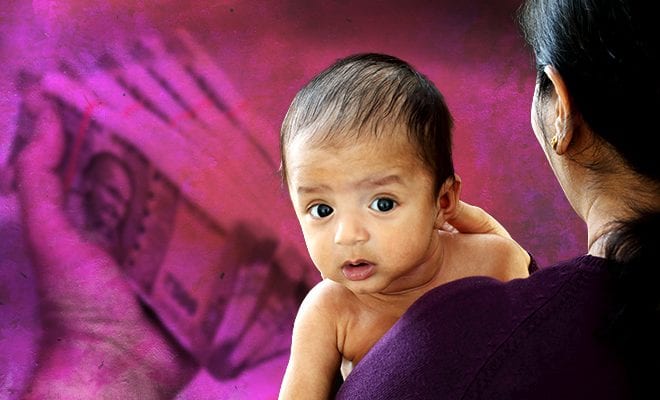 Husband-Wife Sold Their Six-Day Baby To A Childless Couple For Rs. 3.6 Lakhs

I believe people who are blessed with functional families and mindful parents are those who feel a sense of security in themselves and their attachments. They grow up feeling more secure to take risks because they know they have a safety net to fall back on. However, when I think of children who grow up without ever knowing what having parents feels like, it saddens me immensely. These little beings need love and nurturing and to feel like they belong. On the other hand, there are so many couples without a baby because infertility isn’t an uncommon reproductive issue.

These couples, who wish to have babies and can’t can adopt one, thus bringing joy to the child and themselves. Yet, there remains a lot of stigma around adoption and many couples want their own biological children. However, what baffles me is stealing or selling babies. Like, if you are taking someone else’s child, where’s the harm in legally approaching an adoption center? And if you cannot raise a child, where’s the harm in putting it up for legal adoption? Is your baby a commercial product for you?

Recently, six people were arrested for selling and buying of a six-day old baby including the sellers, the buyers and two mediators. It all started with a couple, Govind Kumar (30), and his wife Pooja Devi (22), filing a complaint regarding the kidnapping of their baby and accused their relative, Haripal Singh (50) for the same.

However, there were several discrepancies in the couple’s statements which made the police suspicious. When they reached Haripal’s home, he informed them that the couple had, as a matter of fact, sold the baby.

“Maybe the mother had a change of heart after selling the child. The couple told us about Haripal’s house in Aya Nagar but they did not know the exact house number. When we caught Haripal, he told us that the couple had in fact sold the child for a sum of ₹3.6 lakh. Haripal knew a man named Raman Yadav, who was looking to buy child for his relatives Vidyanand and Rampari. Vidyanand and Rampari were married for over 25 years but did not have any children,” said additional deputy commissioner of police, Harsh Vardhan, as quoted by HT.

The baby’s parents were paid ₹2 lakh in cash and an agreement was signed between them. Four cheques of ₹60,000 each were given by the buyers to the sellers. Initially, the police was treating it as a kidnapping case but they were surprised to find that the parents sold their baby. “As soon as we received the information from the UP police, our teams quickly went to Kanpur. But when we met the couple, they denied kidnapping him. They said they had bought the infant after paying money. It was surprising. They also had what they said was an agreement letter. We were treating this as a kidnapping case,” said deputy commissioner of police (south) Atul Thakur.

All six persons were booked for the trade of a baby and the child was sent to a children’s home following this incident.

ALSO READ: Teejay Sidhu Called Out Comments Suggesting A Male Child Completes A Family. Why Are We Still Obsessed With Gender?