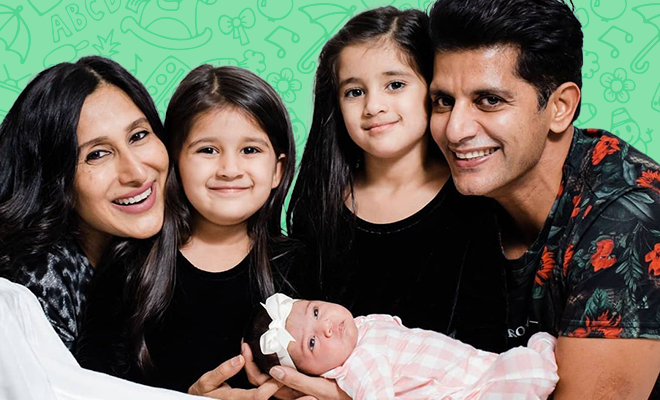 Teejay Sidhu Called Out Comments Suggesting A Male Child Completes A Family. Why Are We Still Obsessed With Gender?

The Government of India can introduce all sorts of welfare policies and incentives for the girl child, but let’s be honest. The real difference will only come from changing people’s mindsets. Even now, the importance of having a male child is so casually thrown around in conversation, sometimes even by the most educated people, that you’d wonder if we’re ever going to be rid of this stigma. In fact, if this recent Instagram post by Teejay Sidhu is any indication, people still believe that unless you have a male child, your family isn’t complete.

Teejay Sidhu and husband Karanvir Bohra welcomed their third daughter in December 2020. The couple already have twin daughters Bella and Vienna, who are a frequent sight on the adorable videos that Teejay and Karanvir post on their Instagram. And now with baby Vanessa, their’s is a beautiful, picture perfect family!

February 15th was celebrated by some as Family Day (particularly in Canada). Teejay posted a picture of her family, including her newborn daughter, a few days later, saying that she missed posting it on the 15th. But the purpose of the post was slightly more serious than just celebrating her family. She used it to call out the mindset that not having a male child meant your family was not complete.

In the caption of her post, she talked about how another celebrity couple who already had a daughter, recently welcomed a baby boy. And when she read the comments on their announcement post, she came across a lot of people saying things like, “Your family is now complete.” Teejay was naturally disappointed because why does a family only become ‘complete’ when a child of a particular gender becomes part of it?

She also explained that while she understood that the comment, possibly from a fan of that other couple, wasn’t meant to be offensive. Still, we ought to be more careful with our words and thoughts and what we put out into the world. She’s right, subconscious bias is one of the biggest impediments in our society’s progress to a more equal and equitable one.

We’re glad that Teejay Sidhu decided to point this out, and set a better example for her followers. She has been doing this a lot, with even calling out people who body shame women for their pregnancy weight. Slowly, but surely, this is how change begins.

Also Read: Teejay Sidhu Claps Back At Pregnancy Weight Shaming, Says There Is No Ideal Weight As Long As You Are Happy.